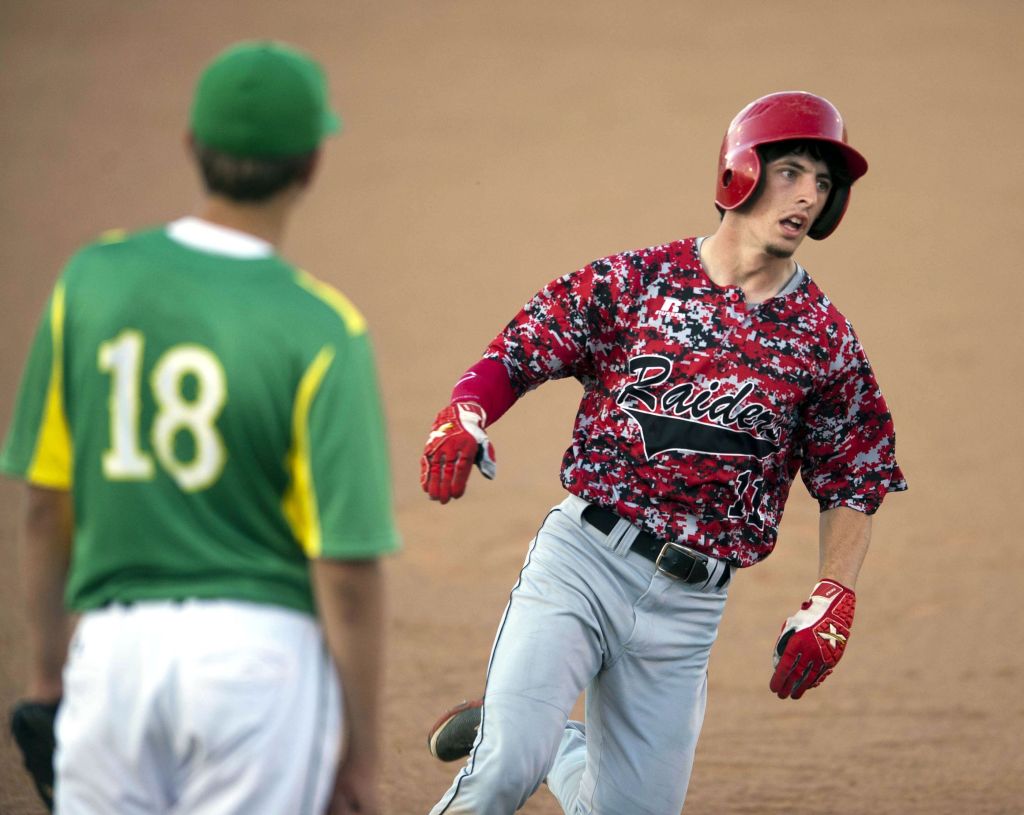 KANNAPOLIS — All those April showers must have fertilized South Rowan’s sluggish bats.
The Raiders’ lineup blossomed Wednesday night at CMC-Northeast Stadium, where it banged out 12 hits in five innings — including its first home run of the spring — and gained an abbreviated 13-0 win over North Rowan.
“We took some good approaches,” coach Thad Chrismon said after South (16-4) advanced to the semifinals of the F&M Bank Classic. “We squared some balls up. Even when we made outs, we hit them hard. That’s all you can ask for, to go up there and hit it hard.”
South benefited from five North errors and scored seven unearned runs. Sophomore righthander Bo Corriher and reliever Walker Joyce combined to pitch a five-hit shutout, while North lefty Brandon White yielded eight runs — six of them unearned — and suffered the loss.
“This is the worst we’ve played all year,” NR coach Aaron Rimer said after the Cavs (7-10) were relegated to the tourney’s loser bracket. “We had five errors, but I think the scoreboard only goes to five. If you count mental mistakes we’re way up in the double digits. It was basically embarrassing out there.”
North’s troubles started almost immediately as the Cavs committed two errors before the game was two-minutes old. South capitalized when Chase Labbe grounded a run-scoring single into left field, plating Tyler Fuller with the only run the Raiders would need.
“We want to win this tournament,” Labbe said after going 3-for-4 with a double, triple and two RBIs. “So you’ve got to take what they give you. They helped us, but we came out with our bats on fire.”
Another North miscue helped South extend its lead to 4-0 in the top of the second. Peyton Penninger reached on a leadoff throwing error, Hunter Travis coaxed a walk and Eric Goldston lined a run-scoring single into center field. Following a groundout a stolen base, Chandler Corriher delivered an RBI single and another run crossed when a relay throw to the plate was cut off.
An inning later South broke the game open with four more unearned runs. White retired the first two batters he faced in the top of the third before Penninger reached on an infield error. Travis drew another walk and Goldston, South’s No. 9 hitter, legged out an infield hit to load the bases. That brought up Fuller, who ripped a 1-0 pitch straight at North right-fielder Noah Gonzalez, who made a diving stab at the ball but came up empty. The balled skipped to the outfield wall while Fuller circled the bases for an inside-the-park grand slam.
“I just see the ball and hit the ball,” said Fuller, who reached base four times, scored four runs and knocked in four. “I think (White) was just looking to throw a strike. He left it middle-in and I just put a good swing on it.”
From his perch in the third-base coach’s box, Chrismon feverishly windmilled everyone home. Later he defended Gonzalez, who made an awkward attempt on a difficult play. “As an outfielder that’s possibly the toughest play you’ll ever have to make,” he said. “It wasn’t maybe 10 or 12 feet off the ground. And when it’s right at you, and it’s on a line, that’s a tough fly to judge. I think he thought it was gonna dive down a little bit, but it just kept carrying.”
With it went South’s momentum. The Raiders added five runs over the final two innings and Bo Corriher took care of the rest. His effort was more persistent than polished, but more than needed.
“I actually wasn’t feeling great tonight,” he said after fanning four batters and winning his third game. “But I suppose it was good enough. Most of the time I worked ahead in the count and the defense made plays for me. They were behind me on offense and defense.”
•••
NOTES: South will face Mount Pleasant (13-4) at 6:30 tonight. The final is scheduled Friday night. North will play A.L. Brown at 1:30 p.m today at A.L. Brown High School. … The Raiders scored runs and had hits in every inning. … North leadoff man Chance Mazza went 2-for-2 and reached base three times.