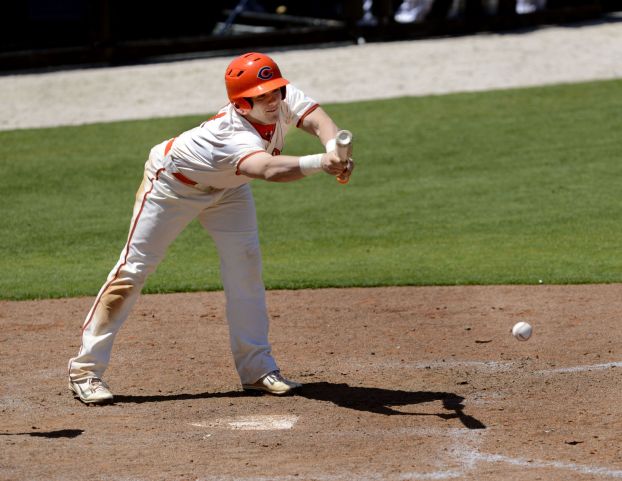 KANNAPOLIS — Salisbury’s Riley Myers probably has a future in baseball, but if that doesn’t work out he’ll be well-prepared for a career singing the blues.
Myers paid some more dues on Wednesday. Pitching for a 4-14 team against a 15-4 team, Myers held Carson scoreless for seven innings in the first round of the F&M Bank Classic at CMC-NorthEast Stadium.
He still lost.
Brandon Sloop squeezed home John Patella in the eighth, and the Cougars won 1-0. That result was probably inevitable. Salisbury has lost the close ones all season, while Carson wins the close ones.
“I’m proud of how I pitched and I’m proud of our defense — Alex Yang and Ryan Jones made some great plays out there today,” said Myers, who brilliantly fell to 1-5. “But we haven’t scored in our last 20 innings. That makes it hard to win.”
Technically, it makes it impossible to win.
Carson coach Chris Cauble got seven bullet-dodging innings from winning hurler John Daugherty (4-1), and Dylan Snider pitched a 1-2-3 bottom of the eighth for the save. The Salisbury eighth was the only three-up, three-down all day. Both teams stranded 12 baserunners, so either team could’ve won it a long time before Carson finally did.
Carson shortstop Austin McNeill had a terrific game defensively.
“Salisbury outhit us and Salisbury outplayed us,” Cauble said. “But John filled up the strike zone and playing the leather won it for us. We turned two double plays and we executed on a cutoff to get a leadoff man (John Yang) out at second on a base hit. In a 1-0 game, that makes the difference.”
Salisbury had nine hits to Carson’s six.
“It was hot out there, but I just kept trying to throw strikes,” Daugherty said. “They kept getting bloop hits. That was getting under my skin a little.”
Salisbury had two hits in the first and two more in the second, but the Cougars’ middle turned double plays in both innings to keep the game scoreless.
Carson had first-and-third with no outs in the second after hits by Bryson Prugh and Patella, but Myers worked out of it. Then both starting pitchers settled in for a long fight.
“Riley is a good pitcher and we knew it wasn’t going to be an easy game,” Daugherty said. “We just struck out too much. We had a lot of situations where we just needed to put the ball in play to get a run.”
Salisbury stranded runners at third base in the fourth and fifth. Chance Bowden boomed a double to the left-field fence, but the Hornets couldn’t get him in.
“When Bowden hit that ball, I was just hoping it would stay in the park,” Cauble said. “We could live with a double.”
Carson filled the bases in the sixth, but a tumbling, back-pedaling catch in short right field by SHS second baseman Alex Yang ended the inning.
Myers stranded two more Cougars in the seventh, getting Daugherty and Prugh with runners at second and third, and the Hornets had their final chance to win it in the bottom of the inning.
Jones and Bowden reached to start the seventh against a tiring Daugherty. Myers, the No. 3 hitter, was next, and Salisbury coach Scott Maddox called on Myers to bunt. A lot of things factored into that decision, including the fact that No. 5 hitter Will Steinman already had two hits.
“That situation, 0-0, seventh inning, I think you have to bunt even if you’ve got Mike Trout up there,” Maddox said. “We’d already hit into two double plays. We couldn’t afford to hit into another one.”
It didn’t work out for the Hornets. Myers popped up his bunt attempt, and Prugh, Carson’s catcher, made a juggling catch for the first out.
Daugherty then pitched around Harrison Smith, and the Hornets had the bases loaded with one out. Steinman was next, and the squeeze was on. If Steinman’s bunt had been fair, Salisbury wins, but he fouled it off.
Daugherty took a deep breath. Then he struck out Steinman and got Harper Miller on a groundball, and it was Carson’s turn.
“I can’t say enough about how Riley pitched,” Maddox said. “He’s had some back issues, and this was the first time all season when he’s really felt loose. We did a good job behind him for the most part, but sometimes when you’re young, you play young. We didn’t execute at times, and Carson executed when they needed to.”
Laws reached second base on a throwing error to start the Carson eighth. When Patella bounced to the third-base side of the mound, Myers made a good play and a good decision. The Hornets got Laws out in a rundown, but Laws stayed alive long enough for Patella to reach second base,
After Matt Saul was hit by a pitch and McNeill roped a single to left, Carson had the bases full with one out. Sloop had entered the game in the seventh and he knew what he’d be called on to do.
“I’m not asked to bunt a lot,” said Sloop, who had ripped a pinch-hit single in his first at-bat. “But I knew the situation. I had a feeling we’d squeeze, I looked for the sign, and Coach gave it to me.”
On the second pitch, Sloop bunted. It was an outside breaking ball, but he got a bunt down toward first, and Patella charged home without a play for the only run of the day.
“We were up against a good pitcher,” Sloop said. “But we just kept playing. That’s why we won.”
• • •
Carson plays Robinson in a semifinal today at 4 at CMC-NorthEast. Salisbury plays Northwest Cabarrus in an 11 a.m. consolation game at A.L. Brown.