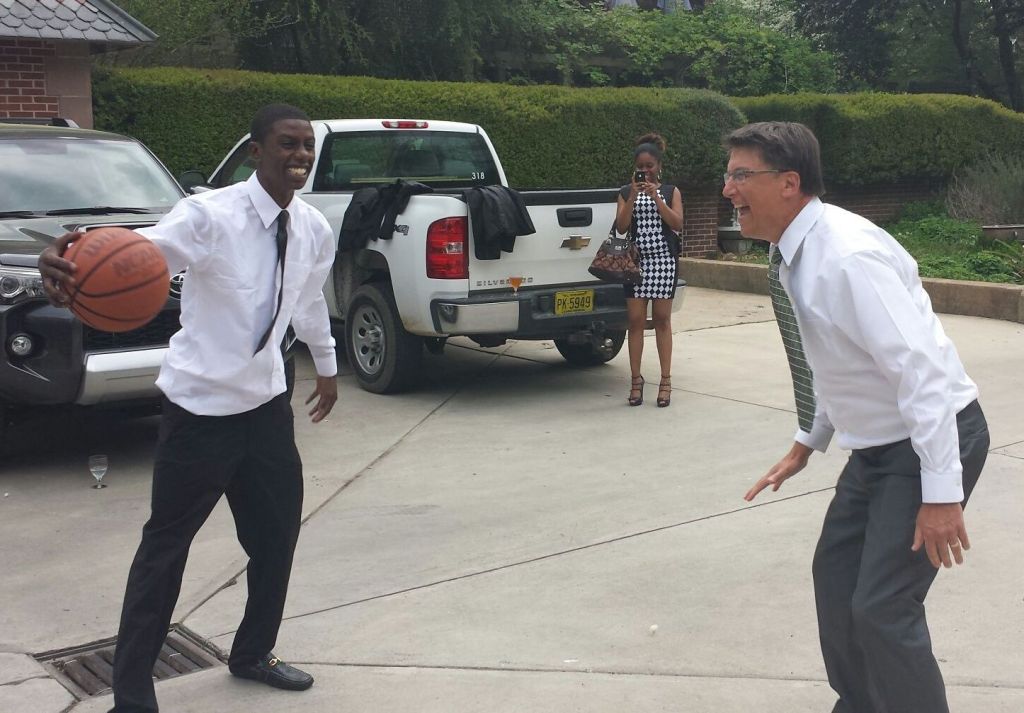 It’s not every day a men’s college basketball team is invited to The Executive Mansion.
But then, it’s not every day that a team makes history as the Livingstone College Blue Bears did in March, winning the CIAA Tournament for the first time in 69 years and being honored for having the highest GPA among all the CIAA men’s squads to boot.
Head men’s basketball coach James Stinson, Jr., his assistant coaches and managers and, of course the players, were all treated to a reception at 4 p.m. Tuesday in Raleigh that was hosted by Gov. Pat McCrory. The event commemorated the Blue Bears’ historic title win at the Central Intercollegiate Athletic Association Tournament inside Time Warner Cable Arena in Charlotte on March 1. The Blue Bears defeated the Rams of Winston-Salem State University 83-68 before playing for the second consecutive year in the NCAA D-II Playoffs.
Also honored on Tuesday were the Shaw University women’s basketball team, for capturing the CIAA title, and the North Carolina Central University men’s basketball team, for winning the MEAC title, or Mid-Eastern Athletic Conference.
“I was honored Gov. McCrory thought enough of Livingstone’s historic win to invite us to his mansion to celebrate,” Stinson said. “Being treated to a reception hosted by the governor was a perfect way to culminate the outstanding season our men’s program has had. As a coach you always want to see your student-athletes succeed, but the most humbling thing for me, and the thing for which I most give glory to God, is the fact that they got it done on and off the court. Not only did we win the CIAA, but we had the highest GPA among all the competing men’s squads, and that’s really saying something.”
Also attending Tuesday’s reception were Livingstone College President Dr. Jimmy R. Jenkins, Sr., his wife Dr. Faleese Moore Jenkins, Athletic Director Andre Springs and other dignitaries of the institution.
The entire Livingstone contingent was captivated by the Executive Mansion’s elegance, stateliness and beauty, which gave them a sense of North Carolina’s evolution, promise and progress.
During the two-hour reception, the nearly 150 attendees enjoyed cookies, punch, water and Arnold Palmers; however, the refreshments took a backseat to the excitement of being there and being honored by the state’s top elected official.
“It was a very exciting experience for Livingstone College and the entire men’s basketball organization,” Jenkins said. “The governor was extremely gracious and read a proclamation declaring Livingstone College Men’s Basketball Day.”
Similar proclamations were also read for the squads at Shaw University and NCCU, respectively.
“On behalf of the Livingstone College board of trustees, I expressed my appreciation to the governor for recognizing our student-athletes’ accomplishments, both in terms of their athletic and academic prowess, and for providing them with a unique opportunity filled with memories I’m sure will last a lifetime,” Jenkins said.
Springs said he was particularly struck by how McCrory made the student-athletes from all three institutions feel welcomed and comfortable. For example, he shot hoops with some of the student-athletes, including Livingstone’s Anthony Welch and Eric DuBose, and he also took pictures with the players on the lawn.
“I thought it was a great experience for our basketball team to be exposed to something on such a positive level,” Springs said. “It’s great publicity for Livingstone College, our athletic department and it’s indicative of both the way Coach Stinson has raised the standard of excellence for Blue Bear basketball and how Dr. Jenkins has supported the program since he arrived on campus in 2006. In the two years that I’ve been the AD, the president’s support has been key and a tremendous part of the success with which we’ve been met in athletics.”
So the adults enjoyed themselves. But what about the student-athletes?
“Going to Raleigh to spend time with the governor was something great for the school,” said senior point guard Mark Thomas of Saginaw, Mich. “It shows that this season was about more than just basketball.”
Thomas, the 2013-2014 CIAA Player of the Year, is also an honors student who will graduate on May 3 with a 3.7 GPA. Though he won numerous individual awards this year for his basketball talent, he said he’s grateful for the success the team had.
“Basketball is a team sport, and I’m so glad the 2013-2014 Blue Bears squad was able to bring Livingstone College its first ever and much-deserved CIAA title,” Thomas said.
DuBose, a sophomore point guard from Brooklyn, N.Y., said he enjoyed the reception at the Executive Mansion.
“It was epic for me,” DuBose said. “Coming from where I come from, I would never have believed I’d get the chance to meet a governor, particularly one from a state other than New York. The event was fun, and the governor had a good sense of humor and made us feel comfortable. You know whenever you go into someone’s home you can be a little uptight initially, especially when the person is the governor, but he made us feel welcomed.”
A highlight of the event for DuBose was shooting hoops with the governor.
“It was a nice experience,” he said. “The governor stood back a bit and didn’t try to check me when I was dribbling the ball. I think he must have seen some of our games and knew he probably would have a hard time stealing the ball from me.”
State W. Alexander contributed to this article.