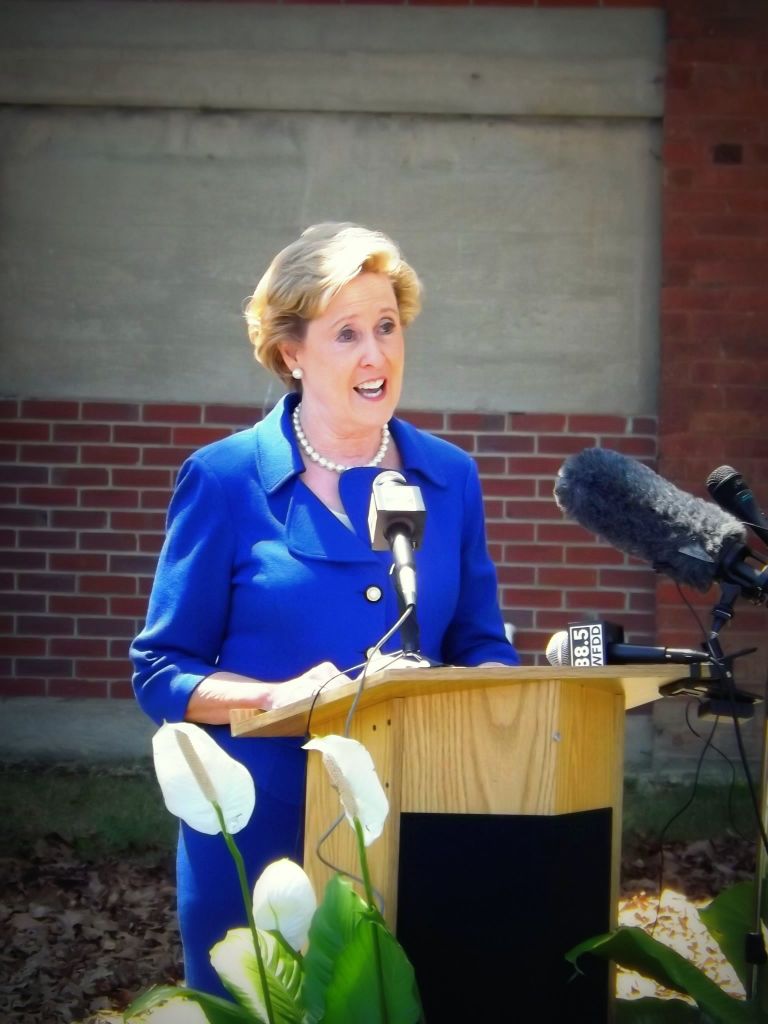 HIGH POINT — Standing in front of the old Pickett Cotton Mill, N.C. Gov. Pat McCrory proposed Wednesday initiatives aimed at helping the rehabilitation of buildings, especially historic structures.
The programs aim at filling in gaps that will be created when state historic preservation tax credits, in place since 1998, go out of existence effective Jan. 1, 2015.
Developers, preservation groups and downtown supporters have said the economic and quality-of-life effects without the tax credits could be devastating, especially to historic-minded cities such as Salisbury.
The governor’s proposals, which include legislation for a new Historic Rehabilitation Investment Program, won praise from Susan Kluttz, secretary of the N.C. Department of Cultural Resources and former mayor of Salisbury.
“I am so proud of Gov. McCrory’s decision to promote the rehabilitation of historic buildings for proven economic development and job creation,” Kluttz said.
“As a former mayor, he is extremely aware of the value of the re-use of empty and under-used historic buildings and the positive impact their development has on communities, including saving fragile neighborhoods, revitalizing downtowns and improving public safety.”
Kluttz added the investment program will be critical for rebuilding cities and towns in North Carolina and supporting a “Carolina Comeback” the governor has promised.
The Historic Rehabilitation Investment Program would be administered by the State Historic Preservation Office, which falls under Kluttz’s department.
McCrory said his upcoming budget also would include matching grant funds for the “Main Street Solutions Fund.” It aims at providing money for rehabilitation projects in smaller N.C. towns.
Myrick Howard, president of Preservation North Carolina, said he had high hopes for the new program.
“There are few activities that are as job intensive and return more money to local communities than historic rehabilitation,” Howard said in a press release from the governor’s office. “There is still much work to do, however, especially in smaller towns and distressed areas.”
According to figures from the State Historic Preservation Office, Rowan County has had at least 48 income-producing and non-income producing (residential) projects which have used N.C. historic preservation tax credits since 1998.
Those projects alone represented a total investment of almost $21 million.
Since 1976, North Carolina has had 1,358 income-producing projects that have taken advantage of federal and/or state historic preservation tax credits. They represent more than $1.7 billion in investment.
Rowan County is among the top five counties in North Carolina using historic preservation tax credits on income-producing projects over that time period, with 71 projects accounting for $27.4 million in investment.
The former Pickett Cotton Mill will be the new home of BuzziSpace, a Belgium company which builds office furniture.
“Investing in North Carolina historic structures preserves our history and creates jobs,” McCrory said. “These programs make cultural and economic sense. Old, abandoned mills and factories are becoming housing and business spaces that are sparking economic revitalization in towns and cities across our state.
“Historic revitalization means jobs, economic development and a rebirth of many downtowns. Companies are relocating to these spaces from across this great nation and from around the world.”
According to a Governor’s Office press release, the Historic Rehabilitation Investment Program is a demand-driven model in line with the governor’s Economic Development Board’s “North Carolina Jobs Plan.”
The Historic Rehabilitation Investment Program supports the re-use of historic, industrial-age infrastructure to be in line with the demands of a new economy, the press release said.
The governor said his budget will include $500,000 for the Main Street Solutions Fund, a matching grant program established in 2009 to rehabilitate buildings in smaller towns.
The Main Street Solutions Fund and the Historic Rehabilitation Investment Program will strive to spur a renaissance in cities and towns reinventing themselves after the loss of long-time industries such as tobacco and manufacturing, the Governor’s Office said.
— Mark Wineka contributed to this story.