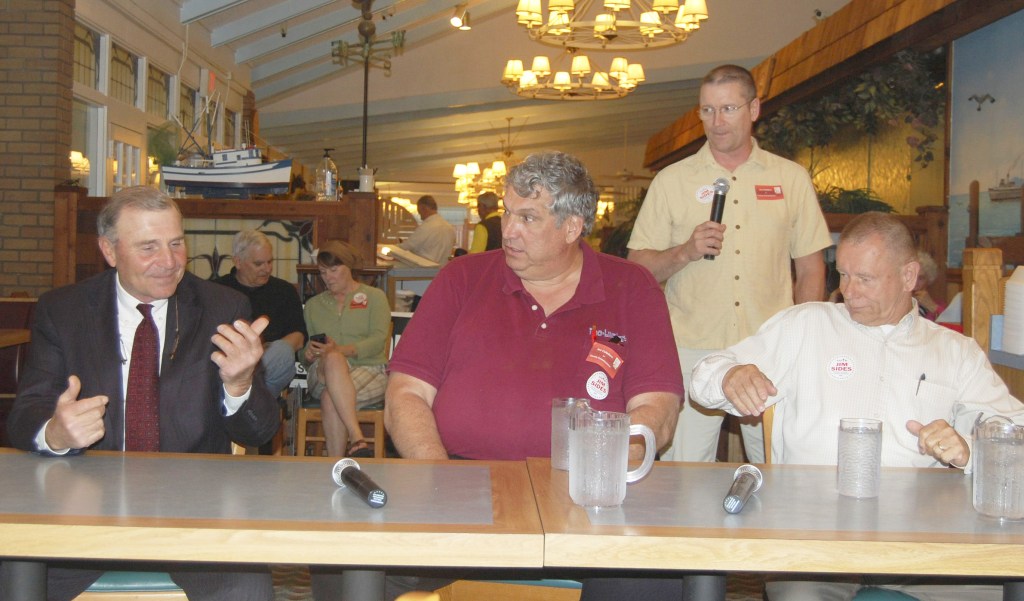 Only three showed up.

Candidates Joe Coladarci, Jim Sides and David Roueche sat front and center in front of dozens of patrons to answer questions ranging from the location of the school district’s central office to concealed carry laws in the county.

When the question arose of who will continue to control the airport, and whether the city will try to reacquire the airport, Roueche said “Rowan County Airport” stands for exactly that – operating for years for all of the county’s citizens.

“When you talk about the airport, the airport should support the county, it shouldn’t be a city airport,” Roueche said. “I believe the airport board needs to be accountable for their ideas and anything that takes place out there in terms of additional buildings, space or if the runway needs to be expanded to compete with Concord or Lexington. That’s a business decision. If it’s something that makes sense and it returns revenue to the county, then I’m in favor of that.”

Coladarci said the city annexed the airport in 2004.

“In the last annexation, they took a million dollars over ten years out of the airport in taxes to the city,” Coladarci said.

The city never put a dime into the airport, Coladarci said.

“So, Carl Ford and Harry Warren and (Andrew) Brock helped the county commissioners to claw back the airport, which was the best thing that happened in a long time to Rowan County,” Coladarci said.

The state legislature since has changed the laws to prohibit forced annexation, Coladarci said.

Sides said, whether he is commissioner or not, he will give the city a fight if it “comes after the airport.”

“The airport is never going to be a money-maker for the county. There are two types of income that the county looks at — direct income and indirect income,” Sides said. “We make a lot of money on selling fuel. Our fuel prices are lower than anybody around here. There are airplanes that will land at our airport for one reason only – to fill up with fuel, and we make good money on the fuel.”

The airport has stabilized since the county has taken it over, Sides said.

“All we’re doing is implementing the laws the state changed last year so we are in line with it. If we don’t allow concealed carry in our buildings, the parks and the library and so on, we have to be able to defend a reason why we don’t do that,” Coladarci said. “If a person doesn’t like it, they can’t come to the county and sue them. There are some more questions that are still being worked on, but we made a recommendation 8-1 on our county planning board.”

The right to carry a firearm is constitutional, Coladarci said, and the right for a person to defend themselves is God-given.

Roueche said a person should have a right to carry a concealed firearm if they passed all of the guidelines and tests allowing it.

“That’s an individual thing. Along with that comes the responsibility that all of us have in this respect for concealed carry, particularly in any open environment,” Roueche said. “You have to be cautious. You have to always be aware of your surroundings. I would defend the Constitution and the amendment to be able to carry.”

Sides said commissioners have the authority to determine what properties, to some extent, concealed carry won’t be allowed.

“(The planning board) decided on the ordinances that deal with our buildings and the general public. They did not deal with personnel policy,” Sides said. “So the question came up, do we want county employees to be able to conceal carry. It makes common sense to me, that if you allow the public to come in with a gun in their pocket, you certainly ought to allow your employee to come in with (one) in the pocket.”

Coladarci and Sides were the only outspoken members of the local Tea Party, and Roueche said he came to the forum to see “what the Tea Party was all about.”

“I don’t understand why some people seem to be ashamed of the Tea Party. I know what I stand for, know what I believe and I’m not ashamed of it,” Sides said. “I think the ‘La Resistance’ people ought to find another party to join, and it’s the Tea Party because we stand for the rights of Americans.”

This year’s election will be easy, Sides said.

“When you go to the polls and you take that ballot, vote for the first guy on the list, skip five and vote for the next guy — real simple,” Sides said.