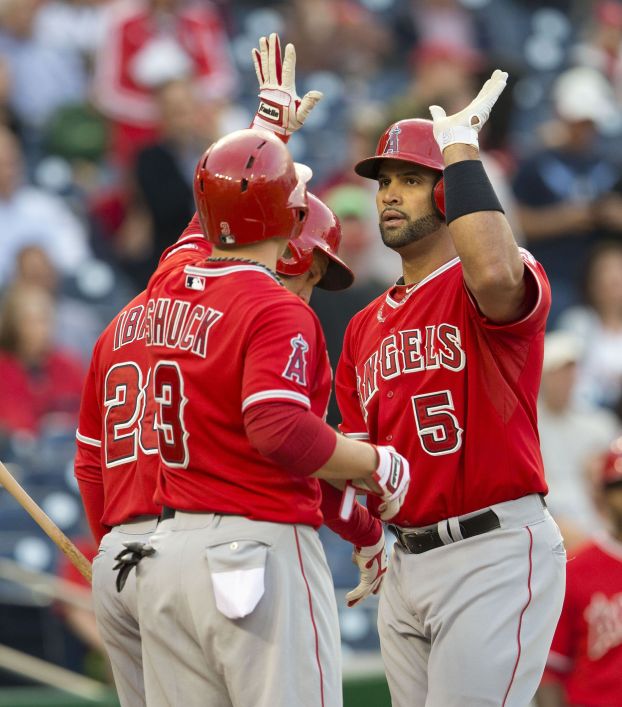 WASHINGTON — Albert Pujols reached 500 homers in a hurry.
The Angels first baseman became the first major leaguer to hit his 499th and 500th homers in the same game, driving in five runs to help Los Angeles beat the Washington Nationals 7-2 Tuesday night.
The three-time NL MVP connected twice off Taylor Jordan (0-3) — a three-run homer in the first inning and two-run drive in the fifth — to become the 26th player in big league history to reach the milestone.
Pujols is the first player to collect his 499th and 500th homers in the same game, according to STATS. About three months past his 34th birthday, he’s also the third-youngest to get to 500; Alex Rodriguez and Jimmie Foxx were both 32.
Making a quick recent surge, Pujols has eight homers this season, all in the past 13 games. His five RBIs on Tuesday gave him the team lead with 19.
The 500th homer went to left-center field at Nationals Park, on an 89 mph pitch with the count at 1-2. Pujols clapped his hands together a few strides before trotting home, then pointed both index fingers to the sky. As soon as he touched the plate, Pujols was greeted by his Angels teammates, who streamed over from the visiting dugout.
Fans gave Pujols a partial standing ovation, and he acknowledged the spectators by tipping his red batting helmet as he approached the dugout. After heading down the steps, he came back out for a curtain call.
In other at-bats Tuesday, Pujols struck out swinging in the second inning and grounded to shortstop in the seventh.
Tyler Skaggs (2-0) gave up two runs in seven innings for the win. Jordan allowed six runs and eight hits in five innings. Washington entered the game with a majors-worst 22 errors and third baseman Anthony Rendon added two to that total.
After a couple of down-for-him years with the Angels following 11 transcendent seasons with the St. Louis Cardinals, a healthier Pujols appears ready to reclaim his spot among the game’s elite hitters. He homered Friday and Saturday in games at the Detroit Tigers to lift his career total to 498, and now he’s reached the round number of 500 — a total that remains hallowed despite losing its luster in recent years because so many players have surpassed it.
Of the 26 members of the 500-homer club, 11 have reached the mark in the last 15 years, according to STATS. Gary Sheffield was the most recent player to do it, hitting No. 500 on April 17, 2009.
“It’s huge. That’s a lot of balls over the fence. That’s a lot of them. Albert’s one of the great hitters of this generation,” Nationals manager Matt Williams said before his team’s series against the Angels. “The ability to not only hit home runs, but the ability to hit .330 and drive in 100-plus every single year — that’s saying something. That’s the ultimate guy you want on your team, because he provides it all.”
The Cardinals selected Pujols in the 13th round of the 1999 draft, with the 402nd overall selection — a steal if ever there was one. Pujols stormed onto the scene as a 21-year-old rookie in 2001, hitting .329 with 37 homers and 130 RBIs.
He won a batting title in 2003, National League MVP awards in 2005, 2008 and 2009, and World Series titles with the Cardinals in 2006 and 2011.
Pujols was the first player to hit 30 homers in each of his first 12 seasons and the second — after Al Simmons in 1924-34 — to reach 100 RBIs in each of his first 10.
A nine-time All-Star, Pujols hit 455 homers with the Cardinals.
So many power hitters of this era, have come under suspicion of using performance-enhancing drugs. Earlier this year, radio host and former Cardinals player Jack Clark apologized for and retracted comments he made in 2013 implying that Pujols used steroids. Pujols sued Clark for defamation in October.
After his decade-plus of excellence in St. Louis, Pujols signed a 10-year deal worth $240 million with the Angels following the 2011 season. Almost immediately, the 6-foot-3 slugger appeared to be slowing down. He hit .285 with 30 homers in 2012 — impressive numbers for most players, but career lows at that point for Pujols.
Things got even worse in 2013. Injuries limited Pujols to 99 games, and he was sidelined from July 26 on. He ended up hitting .258 with 17 homers and 64 RBIs.
But not surprisingly, Pujols’ bat did not stay quiet for long.