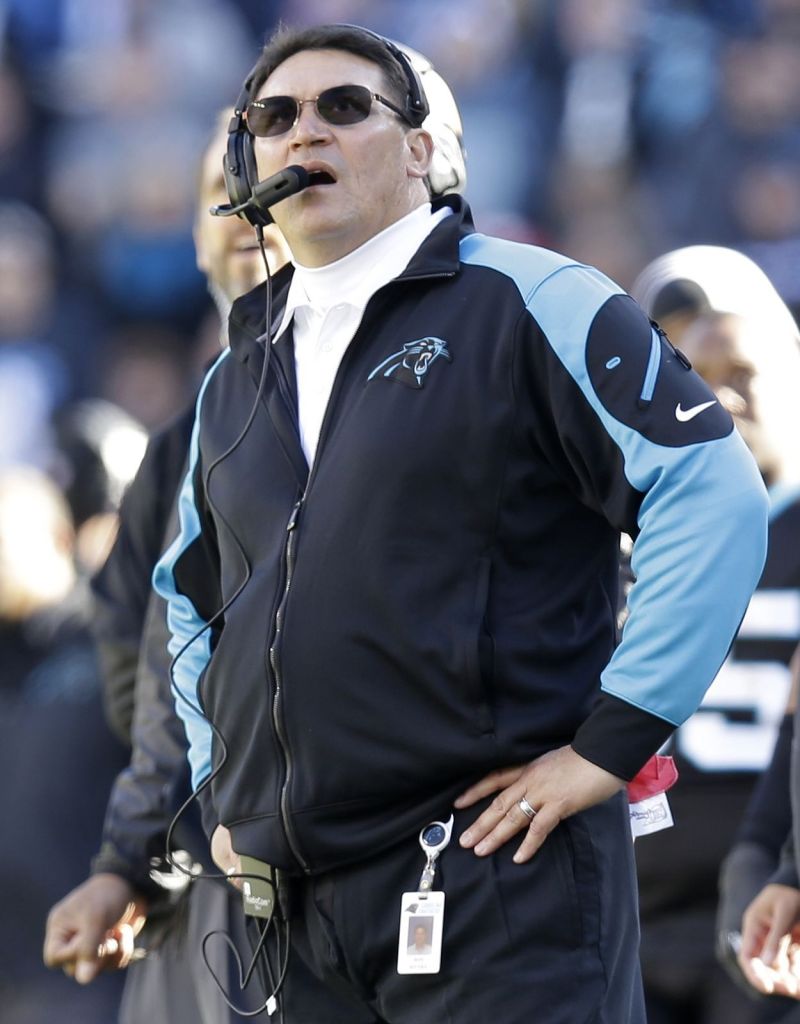 CHARLOTTE — Quarterback Cam Newton plans to take more ownership of the Carolina Panthers’ offense without his top four receivers from last season.
Steve Smith, the franchise’s all-time leading receiver, was released and free agents Brandon LaFell, Ted Ginn Jr. and Domenik Hixon signed with other teams, putting more pressure on Newton to take more of a leadership role entering his fourth season.
“I’m excited to take this challenge to be this team’s leader,” Newton said. “More has been given to me on my plate (and) be a leader of men.”
Newton spoke Tuesday at the team stadium during a break from offseason condition workouts, his first extensive interview since the Panthers lost to the San Francisco 49ers 23-10 in the NFC divisional playoffs in January. Newton’s left foot remains in a walking boot after having ankle surgery on March 19.
He said he was “surprised” when he learned the Panthers had released Smith, one of the team’s most popular players.
“If you were in the 704 (area code), you were caught by surprise,” Newton said. “Everybody in the Carolinas was surprised, including myself.”
He said he still communicates with Smith, and hopes the 34-year-old receiver finds success with the Baltimore Ravens. But Newton emphasized the need to move forward as a team.
He said he’s excited about working with a “hungry” group of receivers that includes Jerricho Cotchery, Jason Avant and Tiquan Underwood. It’s possible the Panthers will add a wide receiver or two in the NFL draft next month.
“We have a lot of guys that are hungry and ready to prove something in this league,” Newton said, “and that’s what I want to do as well.”
Newton was selected to the Pro Bowl last season after leading the Panthers to a 12-4 record and the NFC South championship.
But concerns linger over how long it will take Newton to develop chemistry with a new group of wide receivers, especially considering he’s not expected to practice until training camp.
But an upbeat Newton downplayed any concerns.
“We will have plenty of time to develop chemistry with receivers,” Newton said. “Just because it’s organized team functions doesn’t mean that we can’t (also) meet on our own.”
Newton has spent much of the offseason working on his college degree from Auburn, but returned Monday to Charlotte so he’d have a chance to meet his new teammates.
“The first time you interact with a person you can tell by two or three minutes if the relationship is going to work,” Newton said. “With my talk with those guys it was great. Everybody is excited. Everybody is ready to accept the challenge. Everybody is trying to find and know their role so they can perfect it.”
Pro Bowl center Ryan Kalil believes Newton will continue to develop into a great leader.
“The guys who I have always looked up to are the guys who do it on a daily basis and lead by example,” Kalil said. “Even though Cam is somebody who likes to get in front of the mike and think he’s a lot more entertaining than he really is, he does a great job. He works hard day in and day out in the classroom and on the field.”
Newton said watching his teammates work out made him eager to get back. He’s never missed a game and it’s rare when he’s skipped a practice — or any type of event — since joining the Panthers as the No. 1 pick in the 2011 NFL draft.
“I felt like that lost kid that was in detention and can’t go to recess,” said Newton, with a laugh.
Newton isn’t certain when he’ll start running again. He said the ankle had been bothering him for quite a long time, dating back to his national championship season at Auburn.
“It wasn’t 100 percent for a long time,” said the former Heisman Trophy winner. “I really didn’t know what 100 percent felt like.”
Newton said the surgery has afforded him a chance to step back and study more tape and reassess his play.
“It’s been more helpful for me, mentally,” Newton said. “I am always the type of guy that always had to do stuff, workout, workout, workout — no matter the time or the day. This injury has kind of settled me down, like, ‘How can I get better?’”