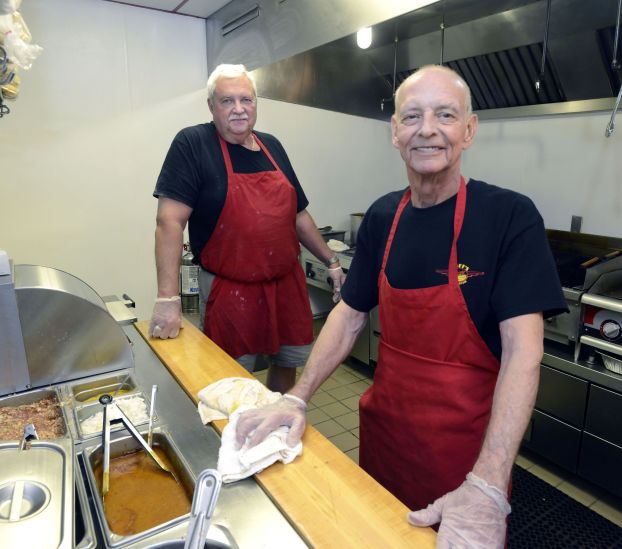 SALISBURY — Old friends and new business partners Dave Arey and Larry Hoffner had just signed the lease for their Salisbury restaurant, Hoff’s Grill, when Hoffner learned he was seriously ill.

The original owner of Hoff’s Grill when it operated in Lexington from 1999 to 2005, Hoffner had tonsil cancer and needed 10 chemotherapy treatments and 35 radiation treatments.

Hoffner, who turns 70 next month, didn’t know how much he would be able to contribute during the grueling months of renovating the building at 121 N. Long St. and opening the new restaurant.

“I told Dave if he wanted to go ahead and take it all on his own, or get another partner, that he should do it,” Hoffner said. “Not knowing what my situation was going to be, whether I was going to be here or not.”

Arey wouldn’t hear of it.

“He said no, we started this together and we will finish this together,” Hoffner said. “That just shows what kind of a man he is.”

Together, Arey and Hoffner opened the new Hoff’s Grill one month ago behind Tokyo Express after a four-month renovation with landlord Victor Wallace. It didn’t take long for customers from Rowan and Davidson counties who remember the original grill and its trademark pork chop sandwich to find their way to North Long Street.

Hoff’s Grill is one of several new restaurants opening in Rowan, along with Porky’s III in Spencer, Porky’s IV at the corner of Jake Alexander Boulevard and Lincolnton Road in Salisbury and Cuba Cafe and Bakery in Granite Quarry.

Arey and Hoffner met in the 1970s, when Arey owned Dave’s Deli at the corner of Long Street and Bringle Ferry Road and Hoffner ran Larry’s Hot Rod Barn, a high performance auto parts shop at the old Towne Mall. Arey went on to open the High Rock Boat and Ski Club, which he owned from 1985 until 2005, while Hoffner had his grill in Lexington.

The two collaborated on a booth at Autumn Jubilee, where they sold grilled shrimp and pork rib sandwiches. They started kicking around the idea of opening a restaurant.

Arey, who turns 66 next month, is a grading contractor. Hoffner sells his signature sandwich at the Rowan County fair each year. But both missed the restaurant business.

Their families thought they were crazy.

“Neither of our wives want anything to do with it,” joked Hoffner, who is married to Teresa Hoffner. Arey is married to Jackie Taylor.

The restaurant does not have a freezer. Everything is made fresh by hand, including the burger patties, potato salad, chili and slaw, and the food comes from recipes the men have collected during their many years in the restaurant business, including the original 1950s recipe for batter-dipped fries from the Chicken and Oyster Shack, formerly in Spencer.

Many people who have eaten pork chop sandwiches from both Hoff’s Grill and Snappy Lunch in Mount Airy, made famous by the Andy Griffith Show in the 1970s, prefer the one made by Hoffner, he said.

“Everyone who has eaten Snappy’s said he’s not even in the same league with mine,” Hoffner said with a grin. “You can imagine how that makes me feel, because he’s sold millions of those sandwiches.”

New also to Rowan County is the Cuba Cafe and Bakery, a sandwich and coffee shop owned by Mabel Jacome and Frank Trujillo at 312 N. Salisbury GQ Ave. in Granite Quarry.

The cafe opened March 24 and features homemade Cuban style pastries with ingredients including guava, cheese, pineapple and coconut, Jacome said. She also bakes croissants and Cuban desserts. Hours are 7 a.m. to 6 p.m. Tuesday through Thursday and 7 a.m. to 7 p.m. Friday and Saturday.

Porky’s IV in Salisbury welcomed its first customers last week, getting the jump on Porky’s III in Spencer, which has yet to open.

Register bought the former Park Plaza in Spencer, where he and partner Joe Strickland are building a Family Dollar and the restaurant. Porky’s Express, which Register did not own, closed near Magic Mart in Salisbury.

At Hoff’s Grill in Salisbury, Hoffner and Arey sat down after lunch recently to talk about their new venture. While Hoffner has yet to receive a clean bill of health, he has completed his final radiation treatment and will return to the hospital in two months for a scan to determine if he is cancer-free.

Doctors are quite optimistic, he said.

In the meantime, Hoff’s Grill will celebrate a grand opening all week with free T-shirt giveaways. Hours are 11 a.m. to 7 p.m. Monday through Friday and 11 a.m. to 4 p.m. Saturday.

“We are not a fancy franchise,” the menu reads. “Just two guys who love to cook and socialize among our customers.”

SALISBURY — All Salisbury residents interested in the appearance, safety and improvement of neighborhoods are invited to attend the spring... read more