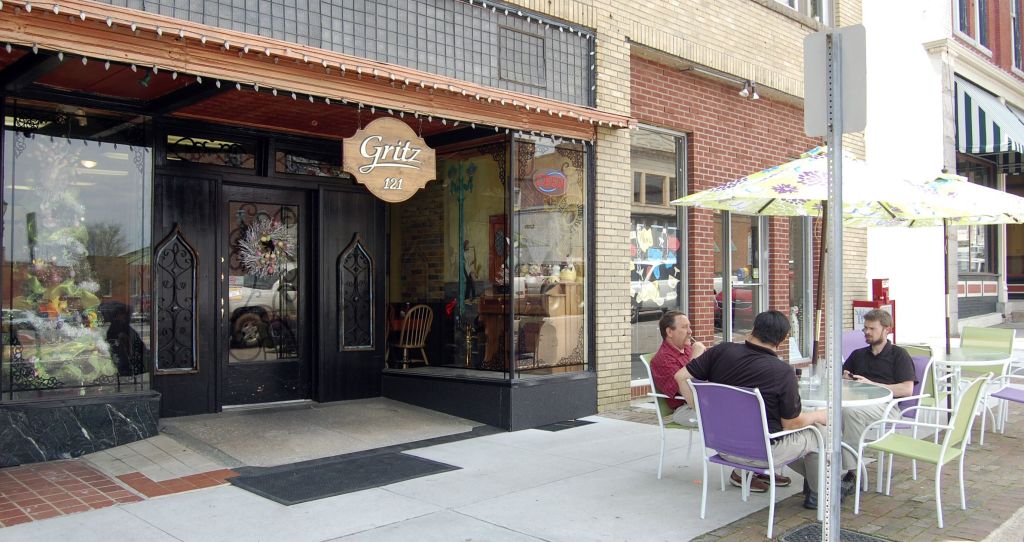 SALISBURY — As several new restaurants open their doors across Rowan County, downtown Salisbury will lose its third eatery since Christmas.
Gritz on East Innes Street will close April 30 after 17 months in business, longtime business partners Bev Ryan and John Hudson Sr. announced Tuesday. Ethos and Cooper’s also have closed, unable to withstand a flood of restaurants that opened or expanded downtown within the past two years.
A combination of poor health and several slow months is forcing Gritz to close the doors.
At age 64, Hudson said his health has deteriorated. He had heart surgery three weeks ago and cannot continue to run the restaurant. Ryan had to take an office job in January.
“You don’t always get a paycheck when you have your own business,” she said.
Without Hudson in the kitchen, the restaurant would lose its heart and soul, Ryan said.
“He’s not going to be giving away his recipes,” she said. “In all the years I’ve known him, he’s never given me a whole recipe.”
Gritz will honor standing commitments and will continue to do catering from another location. The business is for sale.
The restaurant business is notoriously tough. While restaurants make up nearly 15 percent of all new businesses that open in downtowns across the state, they also have the highest failure rate of any downtown business sector, according to the N.C. Department of Commerce.
Volatility is common in the local restaurant industry, developer Victor Wallace said. His family’s company, Belle Realty Development, owns the buildings that Cooper’s and Gritz leased, as well as the building recently rented by Hoff’s Grill for a new restaurant at 121 N. Long St.
Restaurants in Rowan County come and go.
“This is very normal, frankly,” Wallace said.
Because the population is not growing, the local economy cannot support additional restaurants, Wallace said. About the same number of restaurants open as close, he said.
“Unfortunately since Rowan County has had no growth if not some shrinkage, the population has effectively stayed the same,” Wallace said. “You’ve got a fixed number of bodies that you’re feeding.”
The opening of major chain restaurants like Panera Bread has an impact on locally owned eateries, he said. Several local restaurants also moved into larger spaces, including Uncle Bucks on South Main Street and Thelma’s at the West End Plaza, the former Salisbury Mall.
Within a relatively short time, downtown saw the opening of Bangkok Downtown, Emma’s, Gritz, Ethos, Cooper’s and Go Burrito, as well as the new Panera and Waffle House east of downtown and the addition of Subway and Kimono Japanese restaurant to the west.
“Something’s gotta give,” Wallace said. “In a somewhat stagnant population situation that we’ve got here, you can’t add a bunch of restaurants and not expect others to close.”
While fans recently bid farewell to Castaways, Ibiza Deli and Yoshi, Porky’s continues its march to dominate the Rowan County barbecue scene by preparing a third location in Spencer and fourth in Salisbury. The Cuba Cafe and Bakery has opened in Granite Quarry.
Mr. Gatti’s Pizza closed in December, and Charlotte-based Firewater restaurant and bar plans to open in the location at 122 S. Avalon Drive. Sabaidee Thai & Sushi opened in the former Bangkok Garden location, and Spanky’s recently reopened with expanded hours on the Square.
Wallace said he expects to lease the Gritz location quickly but will take his time on the much larger space that housed Cooper’s for two and a half years. The Wallace family is studying the possibility of putting 10 to 15 apartments above the restaurant.
The city of Salisbury is considering aggressive incentives to encourage residential development in the downtown as a way to help support additional restaurants and retail.
Business was good for Gritz until 2014, Hudson said. Gritz was named the 11th best-rated restaurant out of 131 in Salisbury by TripAdvisor.com
Together in business since 1980 when they met while working at the Downtowner, Ryan and Hudson are like sister and brother. Tears come quickly when Ryan talks about closing Gritz.
“We’ve really had a bond around here, all my people,” she said. “These girls have stuck with me the whole time.”
When Ryan had to take another job, Amy Leonard, Jordan Raye and Hannah Ryan kept the restaurant running, she said. Raye wrapped Ryan in a big hug Tuesday morning as she talked about closing the doors.
There just has not been enough business to sustain all the restaurants in downtown, Hudson said. When people go out to eat, they tend to forgot about options in the city’s core, he said.
“I wish people would come and see what we have to offer downtown,” Ryan said.
To inquire about catering or buying the business call 704-232-2589 or 704-798-2396.