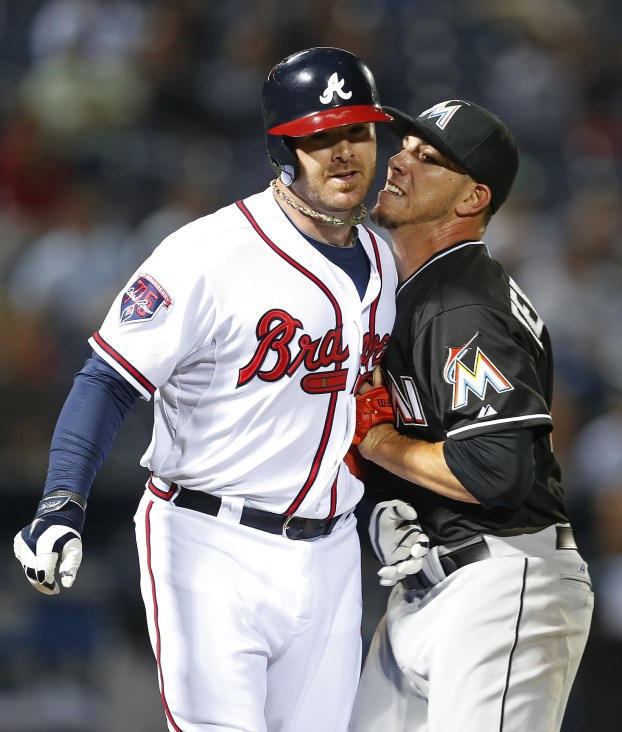 ATLANTA — Jose Fernandez gave credit to his catcher and even claimed he had “a lucky game.”
The Braves weren’t buying it.
Fernandez matched his career high with 14 strikeouts in eight innings and combined with Steve Cishek on a three-hitter as the Miami Marlins shut out Atlanta 1-0 on Tuesday night.
“He pitched amazing,” said Atlanta’s Chris Johnson. “We went up against a buzz-saw today.”
Braves manager Fredi Gonzalez said his hitters “were coming back shaking their heads.”
Fernandez (3-1) outpitched Atlanta’s Alex Wood (2-3), who also was dominant. Wood allowed four hits and one run with no walks and a career-high 11 strikeouts in eight innings.
But the night belonged to Fernandez.
“I think it would be fair to say that was probably his best-pitched game as far as his stuff and his command,” said Marlins manager Mike Redmond.
Fernandez struck out the side in the fourth and fifth innings. He allowed three hits with no walks but said he didn’t have that kind of control in the bullpen before the game.
“My breaking ball in the bullpen was horrible, horrible,” Fernandez said. “But I thought to myself that when they say ‘play ball’ it gets better.”
Fernandez said catcher Jarrod Saltalamacchia deserved credit for the way he helped keep Atlanta’s batters off-balance.
“He was just amazing back there,” Fernandez said. “I can’t explain how good he was.”
Gonzalez said Fernandez, 21, has more dominant games in his future.
“He’s got the capability of running those type of games out every time he goes out,” Gonzalez said.
When told he was receiving postgame compliments in the Braves’ clubhouse, Fernandez shrugged and said “That was a lucky game today, I think.”
The Marlins gave Fernandez the only run he would need in the fourth. Giancarlo Stanton hit a one-out double to left field and scored on Casey McGehee’s single up the middle.
Jason Heyward led off the first with a single to left field, and the Braves didn’t have another hit until Chris Johnson’s leadoff single in the eighth. Fernandez then struck out Dan Uggla and Evan Gattis before Andrelton Simmons’ infield single moved pinch-runner Tyler Pastornicky to second.
Pinch-hitter Ryan Doumit grounded out to Fernandez to end the eighth.
The eight innings matched Fernandez’s career high. He was at 109 pitches after the eighth, so Redmond said it was an easier call to bring in Cishek for the ninth.
“I think he did his job,” Redmond said of Fernandez. “The agonizing would have been had he been around 100 pitches. After the runners got on in the eighth, I knew that was going to be an easier decision.”
Cishek pitched a perfect ninth for his fourth save.
Atlanta’s only other baserunner before the eighth came when B.J. Upton reached on McGehee’s fielding error at third base in the fourth. Fernandez then struck out the next two batters to end the inning.
It was the second straight start Fernandez did not allow an earned run. He allowed three unearned runs and received no decision in the Marlins’ 6-3 loss to Washington on April 16.
Fernandez set his career high with 14 strikeouts against Cleveland on Aug. 2, 2013. Wood’s previous high was nine strikeouts against Washington on Aug. 16, 2013.
Wood lowered his ERA from 1.67 to 1.54 in the loss.
The game lasted only 2 hours, 8 minutes.