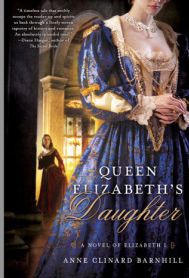 Author Anne Clinard Barnhill will sign books Saturday from 1-3 p.m. at Literary Bookpost & Just the Thing, 110 S. Main St.
Barnhill’s latest book, “Queen Elizabeth’s Daughter,” was released by St. Martin’s Press in March.
Mary Shelton, lady-in-waiting to Queen Elizabeth, is a royal ward, like a daughter to the Virgin Queen, and, like any mother, Elizabeth wants to make a fine match for her girl.
The Earl of Oxford seems to be exactly what the queen has in mind, but Mary knows him to be villainous and cruel. Instead, she finds the charms of a lowly courtier, Sir John Skydemore, more to her liking. But he’s poor and he’s a Catholic at a time when the Old Religion is banned.
Indeed, because of traitorous plots against Elizabeth sanctioned by the Pope himself, being a Catholic has become dangerous. Will Mary risk the queen’s wrath and marry her love? If so, what will become of them?