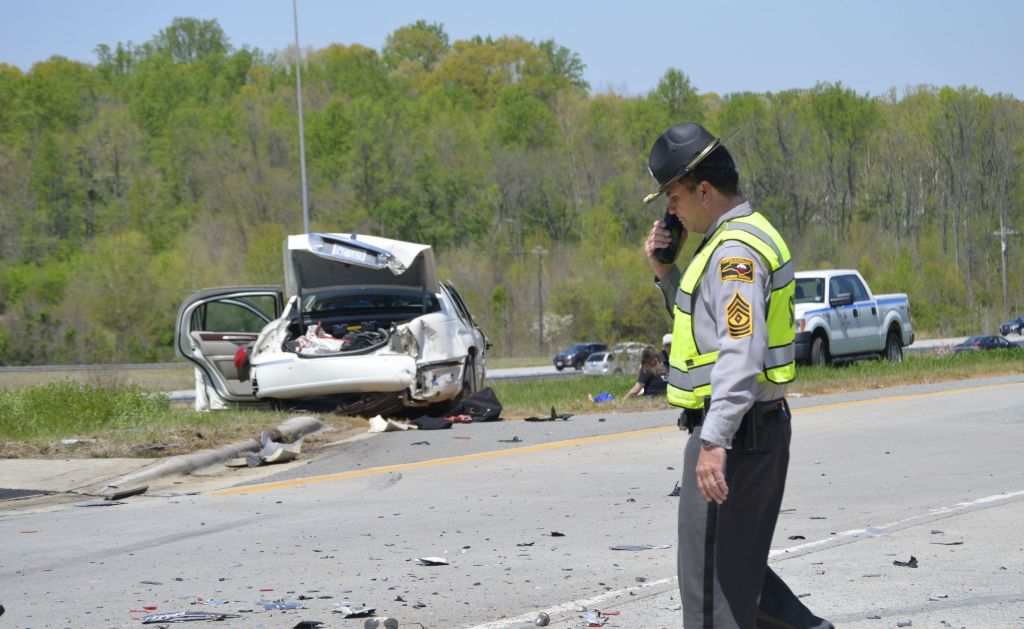 EAST SPENCER — A tractor-trailer going too fast to stop at a sign on Old Union Church Road hit a car carrying four people.
The wreck happened near the Interstate 85 on ramp at 1:30 p.m. Monday.
The tractor-trailer crashed through a guardrail and went down an embankment, taking out utility lines. Another tractor-trailer that came upon the crash also careened into the utility lines.
Multiple emergency responders were called to the scene and found a tangle of power lines stretched across the top of the two tractor trailers.
Elisabeth Husted, 32, of Lexington, said she was going to the park with her two young children and a family friend when the wreck happened. She didn’t have time to avoid it, she told a Post reporter.
The tractor-trailer, driven by Michael Sanders, 58, of Matthews, crashed into Husted’s Lincoln Town Car and it spun out of control. The car came to rest on the side of the roadway near the exit ramp.
N.C. Highway Patrol Trooper H.T. Sloop said Sanders failed to stop at a stop sign at the top of ramp on exit 79, traveled through Old Union Church Road, collided with the Lincoln and then hit a guardrail. He came to rest down an embankment and hit a utility pole, knocking down the lines. Sanders was driving truck from Ryder Truck Rental Co.
A second tractor-trailer driven by Robert Dix, 48, of Sharp Transit, Long Ferry Road, came along and hit the downed utility lines.
Officials aren’t sure why Sanders didn’t stop. He was not impaired, Sloop said.
Sanders was cited for failure to stop at a duly erected stop sign.
Husted said her children were fine, but shaken. She said it was the first car accident she’d ever been involved in and they were thankful they were OK.
She said they were taking a break Monday after dealing with parent’s health. Her father was checked into a hospital and her mother had a heart attack last week.
Husted said she was hit by her airbag, but was not seriously injured. The family friend, a 15-year-old, said she received cuts to her arm from the broken glass. The two young children were temporarily trapped in the car. The door was damaged, making it difficult to get out Husted said. As soon as the crash occurred, she said, there was a volunteer firefighter on the scene and two others who stopped to assist her.
The Miller’s Ferry, Union and East Spencer fire departments responded, along with Rowan EMS and Rowan County Emergency Services. Duke Energy, AT&T and Time Warner responded to repair the lines. Officials with the N.C. Department of Transportation arrived at the scene to repair the guardrail.
Contact reporter Shavonne Potts at 704-797-4253.