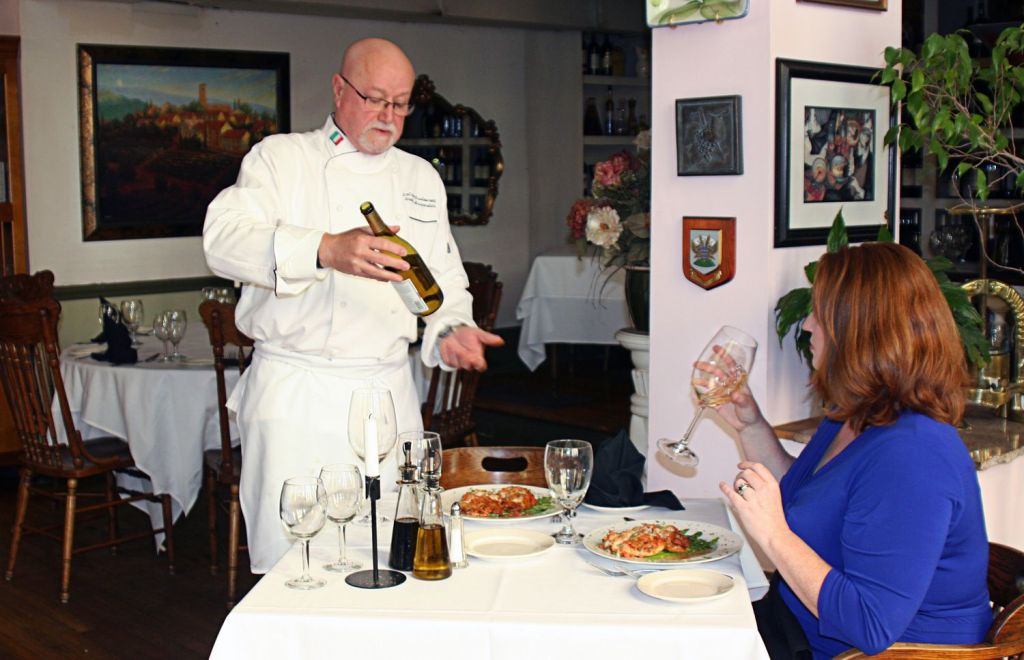 If you know me, you know that I hate being late. I often over-compensate for this by going to appointments a minimum of five minutes early. But the day I arrived at La Cava Italian Restaurant, I showed up far too early.

I accidently gave the film crew and La Cava different arrival times. But restaurant owner Gianni Moscardini was sitting outside on the patio, scrolling on his computer checking out Facebook, drinking a tall glass of wine and smoking a cigar. I arrived more than half an hour early, but he didn’t seem flustered.

Instead, he invited me in, showed me around his kitchen (he had everything prepared for us to cook), and we sat outside on a gorgeous day while he finished his cigar. This is classic Gianni. Cool. Calm. Collected.

La Cava Italian Restaurant is a gem in Rowan County. Gianni was kind enough to let me crash his kitchen, and it was a delight. La Cava was founded by Gianni and his wife, Mona, in 1994, and is housed in a glorious former church built in 1897, just a few blocks from downtown Salisbury on South Church Street.

One doesn’t just go to La Cava for its amazing food, though. One goes to La Cava to have an experience. The La Cava experience is familial.

Gianni is originally from Carrara, Italy, known for its white and blue-gray marble quarries, the town that provided marble for Michelangelo; Gianni will share with you stories of his childhood, all the while cooking recipes from his mother and grandmother. Mona welcomes you into La Cava as if you are family.

Local personality Gary Thornburg is La Cava’s maître d’, and as Gianni says, “Gary has been here so long, he’s just a part of the building.”

La Cava has a full, stocked wine cellar of some of the world’s finest vintage vines, and the dining experience is extraordinary. Call ahead of time and request the sweetest table in the restaurant, which is located in the wine alcove of the original altar. It is enchanting and incredibly romantic.

At La Cava, you will not be fed within a half hour. You are not at a commercial restaurant. You will be there for at least two hours. You will be fed an unforgettable multi-course meal, drink an amazing bottle of wine (or two) in an enchanted church among friends and family. Be sure to order dessert (the cream puffs are to die for).

Gianni decided to cook up Chicken Pizzaiola with asparagus. All ingredients were fresh and the recipe was incredibly easy. Gianni says that most of the meals prepared at La Cava are easy, and that it is the quality of the ingredients that make meals so good.

So we begin at the beginning.

The kitchen at La Cava is housed within the original left side of the church’s altar and had to be custom built. The kitchen is charming, but very small. Pans hang from the ceiling, a very old butcher block juts out from under the commercial countertop, and the kitchen is so narrow that two people cannot stand side-by-side. But Gianni likes the kitchen so cozy. Everything has its place and when the restaurant is packed, he doesn’t need to move around too much to cook since everything is within reach.

As he diced, Gianni shared that at La Cava, tomatoes are never put in the refrigerator. They are always left out at room temperature. Putting tomatoes in the refrigerator takes away their flavor. He then diced a ball of homemade mozzarella, which he makes himself at La Cava. He then set aside some sea salt, fresh oregano, pepper and a few tablespoons of nonpareil capers. Nonpareil capers are the smallest and most flavorful capers. Bottles will be marked “nonpariel” or “non-pariel.”

He then took four chicken breasts, wrapped them in plastic and pounded those to about a half-inch thick on the butcher block. He dipped the chicken breasts in flour until they were covered. On the stove top, he took a skillet and added a large dollop of extra virgin olive oil and about four tablespoons of butter, melted them together, and cooked up the chicken until it was cooked thoroughly on both sides. About half way through cooking the chicken, Gianni added a little white wine to the skillet, and there were flames. Lots of flames. It was awesome!

He cooked so elegantly and nonchalantly, and while the flames may have been slightly for show, adding the white wine was a wonderful touch to the flavor profile.

I kept asking Gianni, “How long do you cook that for?” And his standard answer was (with a shrug), “Until it’s done.”

When the chicken was cooked on both sides, he topped it, while still in the skillet, with the tomatoes, capers, a bit of oregano, a bit of sea salt and pepper and smothered it in mozzarella. He added a little bit more white wine, then put the entire skillet into the broiler to let everything melt together.

How long did we cook that? Until it was done.

While we were waiting for the chicken to finish broiling, we boiled some asparagus for about two minutes so that it was cooked, but still crispy. Gianni arranged the asparagus on plates and when the mozzarella on the chicken was melted and slightly golden, he placed the chicken and all its melted goodness on top of the asparagus.

It was gorgeous. And for so few ingredients, it was amazing and flavorful. I even packed some up to take home to my husband but I ended up eating it before he came home because it was so good.

Sorry, dear husband, for not saving you any, but feel free to take me to dinner at La Cava Italian Restaurant any time!

• A splash of white wine

• A touch of olive oil

• Sea salt and pepper to taste

Pound chicken breast to a half-inch thickness. Coat with flour. Add a touch of olive oil to a skillet and melt the butter in the olive oil. Cook chicken in skillet on medium to high heat, flipping it to cook thoroughly on each side. Add a splash of white wine to the skillet. When chicken is cooked fully, top with tomatoes, capers, oregano, mozzarella, parmesan and salt and pepper to taste. Put entire skillet into the broiler and cook until the cheese is melted and golden brown.