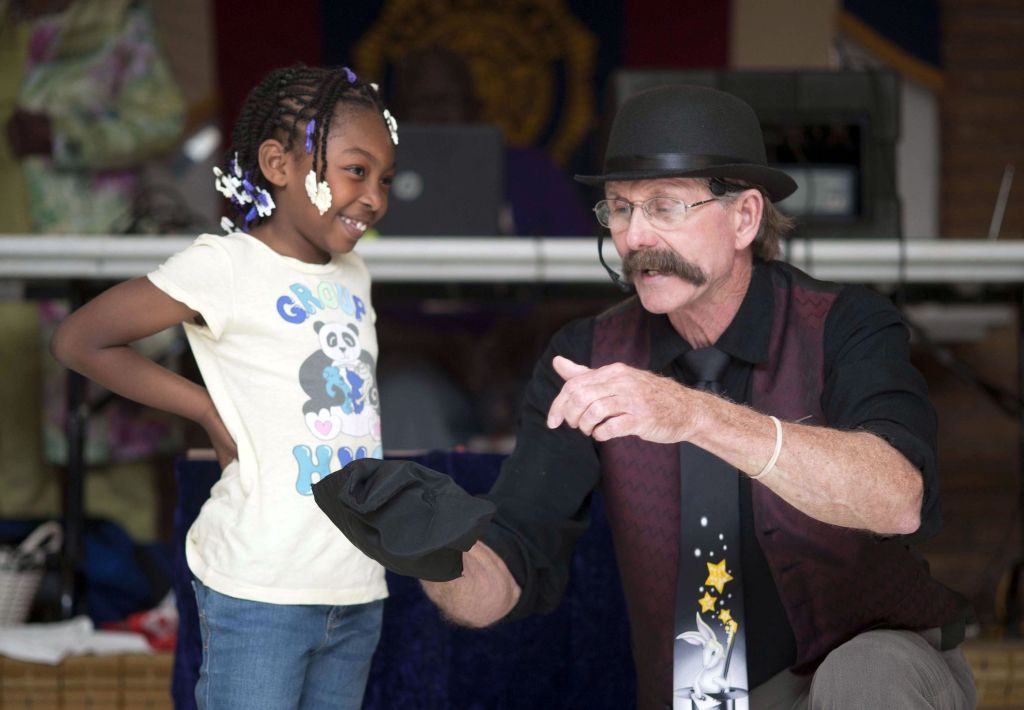 Easter might have been Sunday, but the holiday’s spirit lived on Monday afternoon at the J.C. Price American Legion Post #107 as more than 100 children gathered for its annual Easter celebration.
“We’re surrounded by three projects,” and those public housing developments “serve the under served,” said Commander Mae Carroll.
There are “no outlets” for the children who live near the post to celebrate holidays, she added.
The post has hosted its Easter celebration for roughly the past 35 years, Carroll said, but this is the first year that the event has been cosponsored by the City Council.
Also new this year, the post focused on reaching out to the Hispanic community and put an emphasis on gang prevention.
The children began trickling in right before 2 p.m. They played in a bouncy house, and chattered as they waited for the events to start.
As the children were gathered inside their numbers began to swell.
Salisbury magician Glen Yost wowed his audience by linking metal rings, making bottles and glasses appear and moving knots from one rope to another.
Yost asked 7-year-old Alexis Burch to assist him with one trick, where she made an egg appear in a pouch. He also had Salisbury Mayor Paul Woodson help him with the linking rings trick.
Afterward, Burch said, “I liked when I disappeared the egg,” adding that she also enjoyed the bounce house and egg hunt.
Then, Thomas Barksdale, who speaks to at-risk youth, spent a few minutes talking to the attendees.
He encouraged them to say “thank you” their parents, “go to school to learn” and “choose good friends.”
Barksdale shared that his best friend joined a gang when he was young, and that because of that; his friend spent 15 years in jail.
When it was time for the egg hunt, the children couldn’t contain their excitement as the descended on the field filled with Easter eggs. They ran around, grabbing as many eggs as they could, putting them in baskets, buckets and bags.
After the hunt, the children went back inside the post for a hot dog dinner, followed by a raffle. The post gave away four bikes and cash prizes.
Woodson said the point of the event was to be both fun and educational, and to “try to teach boys and girls to be good citizens.”
Several years ago, the City of Salisbury put anti-gang initiatives in their budget. This year, they decided to use some of that money to partner with the J.C. Price American Legion Post to bring the anti-gang speaker and the magician to its annual Easter celebration, Woodson said.
In addition to its Easter celebration, the post hosts a number of events for children throughout the year, including ones at Halloween, Labor Day and Christmas, and has been recognized by the American Legion nine times over the past 20 years for their involvement with the children and youth of the community.
“We know some of the children will never be able to have this,” Carroll said, as she explained why the group is so adamant about hosting events for the youth in the area.
The attendees, who were on spring break this week, had fun, each enjoying different parts of the afternoon.
Ty Adkins, 9, said his favorite part was the magic show.
Zkeiya Oglesby, who is 5, said she really liked finding the eggs during the Easter egg hunt.