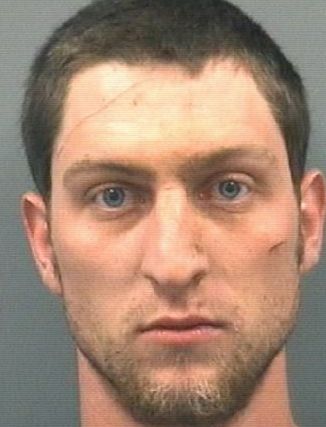 Police believe a Cleveland man was intoxicated when he was found outside a Keystone Drive home, officials say, trying to break into it.

Salisbury Police charged Travis Heath Davidson, 24, of the 1200 block of Bear Poplar Road, with attempted first-degree breaking and entering. The homeowner called saying there was a man banging on their back door. The owner threatened to call police and the man shouted an obscenity, telling the owner he didn’t care. An officer asked Davidson where he was and he gave the officer his address. He has since been released from the Rowan County Detention Center under a $5,000 secured bond.

• Two students were charged Friday with possession of a scheduled VI substance in the 599 block of McCubbins and South Caldwell streets.

• A man reported a larceny from his vehicle Friday in the 100 block of Crawford Street.

• Johnson Concrete reported a vandalism occurred sometime between 5:30 p.m. Thursday and 6:30 a.m. Friday in the 200 block of Klumac Road.

• A man reported a shotgun was stolen from an unlocked pickup sometime between 10 p.m. Thursday and 6 a.m. Friday on North Road.

• A man reported credit card fraud occurred on Friday in the 200 block of Ackert Avenue.

• A woman reported a larceny from a motor vehicle Friday parked at the Forum in the 2300 block of South Main Street.

• Two men reported a theft from their motor vehicles Friday in the 200 block of Castlewood Drive.

• The Car Spa reported a vandalism of a coin-operated machine Sunday in the 200 block of Faith Road.

• A man reported an assault Sunday in the 1200 block of Camp Road.

• A man reported a tag stolen from his motor vehicle Sunday in the 300 block of Bendix Drive.

• Livingstone College reported a burglary Monday at a vacant home it owns in the 800 block of West Monroe Street.

• Roy Lee Sims, 68, of the 20 block of Kesler Street, was charged Saturday with misdemeanor assault on a female.

• James Gerald Robinson, 19, of the 400 Ashbrook Road, and Marquez McCain, 17, of the 200 block of Maple Ridge Circle, were cited Saturday with simple possession of marijuana in the 1900 block of Old Wilkesboro Road at Kelsey Scott Park.

• Lakesha Sherelle Cowan, 22, was charged Sunday with misdemeanor simple assault in the 1600 block of Standish Street.

• A woman reported a vandalism Wednesday in the 2300 block of Airport Road.

• Rowan-Iredell Volunteer Fire Department reported cans of gasoline were taken from a fire truck on multiple occasions and $30 was taken Wednesday in the 5700 block of Chenault Road, Cleveland.

• A man reported a vandalism in the 4800 block of Statesville Boulevard.

• Dominique Valentino Jones, 21, was charged Wednesday with possession with intent to sell and deliver marijuana and possession of drug paraphernalia during a traffic sop on Interstate 85.

• Randy Shane Moore, 37, and Cathy Diane Coons, 38, were charged with misdemeanor resist, obstruct, delay an officer in the 300 block of Gee Drive, Kannapolis.

• Nicholas Lewis Neely 26, was charged with felony breaking and entering Wednesday in the 800 block of Needmore Road, Woodleaf.

• Stephen Phifer, 42, was charged Wednesday with misdemeanor assault on a female in the 200 block of North Main Street.

• Casey Adam Miller, 24, was charged Wednesday with misdemeanor allowing a vicious animal to run at large in the 200 block Hoofprint Trail, Mount Ulla.