Wouldn’t this be a great year to run in the Boston Marathon? 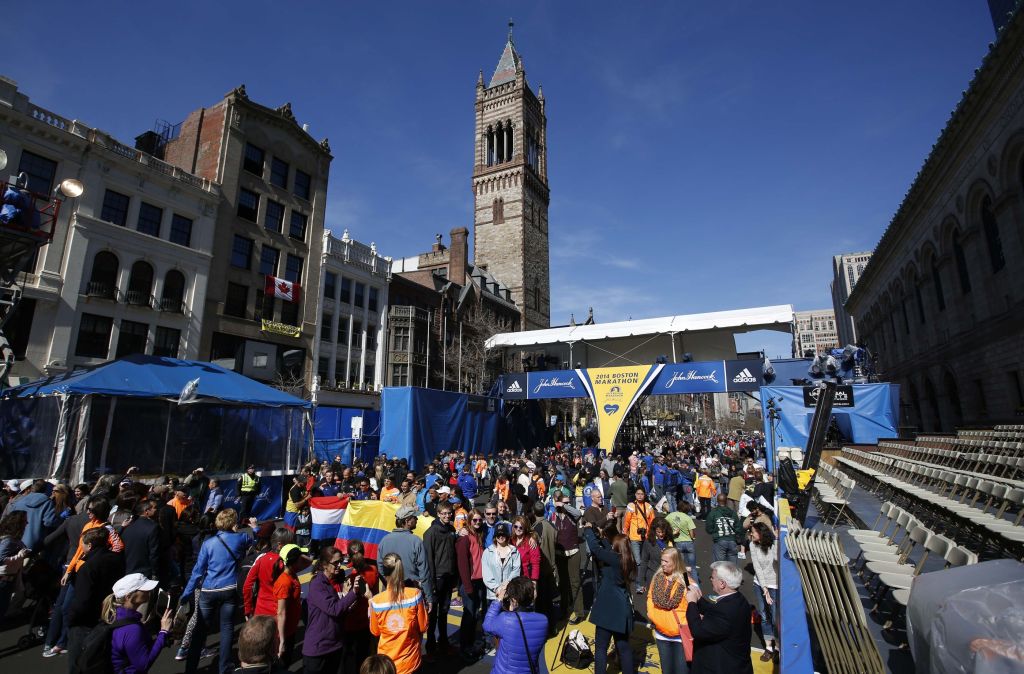 Most years, I am content with watching the Boston Marathon on TV. Folks around here aren’t familiar with Patriots Day, the day of the annual running of the Boston Marathon, the world’s most famous footrace. But if you are from Boston or the surrounding area, Patriot’s Day is a huge deal commemorating the battles of Lexington and Concord and the start of the American Revolution. Many have the day off for the major holiday and by far the biggest activity of the day is to volunteer at, or watch the 26.2 mile race. More than one million spectators will line the course.

I was fortunate to compete in several Boston Marathons. As marathons go, Boston differs in some ways from others. The largest percentage of the runners must qualify by meeting very stringent standards set by the Boston Athletic Association. It is the only marathon in the world that requires a previous performance at or below a certain age and gender graded time limit. Competitive runners at some point usually get around to dreaming of going to Boston.

The commitment to months of grueling training and the cost of the trip often make the idea of out of reach. Yet, each year thousands of runners do make just that commitment. This year, there are 37,000 of them from all over the world. Boston is considered one of the world’s “Big Four” marathons, joining London, New York City and Berlin.

My Boston marathons came in the late ‘80s and the ‘90s. The storied course is still the same, and probably always will be. The race starts in Hopkinton, Massachusetts, a small town that just happens to be 26.2 miles from the Copley Square finish line in downtown Boston. I remember the long bus ride out to the start on one of hundreds of school buses. Though I was a marathon veteran by that time, the anticipation keeps most runners fairly quiet on the ride as they think of how the day will unfold. On my first trip to Boston, I was alone and not sure of what to expect. The runners are required to board those buses very early in the morning, making arrival at the school in Hopkinton usually several hours before the actual starting gun.

That leaves lots of time to try to get comfortable. Runners are then ushered into a school building or onto the school grounds. Large tents help some, but “comfortable” is just not in cards. That first year, I just wondered around and certainly didn’t arrive at the start rested. The next two times, I went with a friend from Georgia and we found an abandoned outbuilding behind a vacant house to get out of the weather and rested on an old sofa. As with most major marathons, the start area is mass humanity. Hopkinton itself has a population of about 15,000, but will swell to about four times that size just before the starting gun. Speaking of the start, this year’s event will have nine corrals of runners, with the first one starting at 10 a.m. and the last at just after 11. Security is ramped up, as expected, in the start area as well as at the finish. Runners cannot bring their usual bags of pre-race food, clothing, etc. this year.

Towns visited early along the course are Ashland, Framingham, Natick and Wellesley. The runners cross the Charles River near midway. The course is slightly downhill through this point, and runners often run a little too fast because of adrenaline and the elevation decline.

The most famous portion of the Boston Marathon, previous to last year’s tragedy at the finish line, has been the Newton Hills. They are often referred to as the deciding portion of the course as runners climb a steady but not severe uphill grade that includes the infamous Heartbreak Hill. Heartbreak Hill has earned its name because the hopes of fast times for many runners have been crushed by the placement of the final major climb on the course. I will admit to being one of them. Once runners top Heartbreak, the course has only a few minor hills the rest of the way. Depending on how the body feels and whether the legs have had it, this last six miles can seem exhilarating or as painful and long as watching back to back episodes of the Bachelor.

Runners continue on through Brookline, then make a few quick turns and see the finish line about half a mile away as they turn onto Boylston Street in Boston. The long sought after finish line is finally in sight.

All of these town names, as well as the famous Citgo sign near Fenway Park, are almost biblical to long distance runners. Today is the 118th running of the world’s oldest annual marathon.

All of the above is what I consider special about the Boston Marathon but it is not why I especially would like to be there today in some capacity. Runners across the world have embraced the spirit of the city after the tragedy at last year’s finish line. Entries are up by about 13,000 over last year and many thousands more would be there if not for the qualifying standards. Once again, the strength and spirit of good people will win out over insane and ridiculous acts of violence. Runners didn’t shy away from returning and made a huge statement by increasing entries by about 50 percent. Today, I will watch the TV coverage and wish I was crossing that finish yet again but for much more than any personal goals.