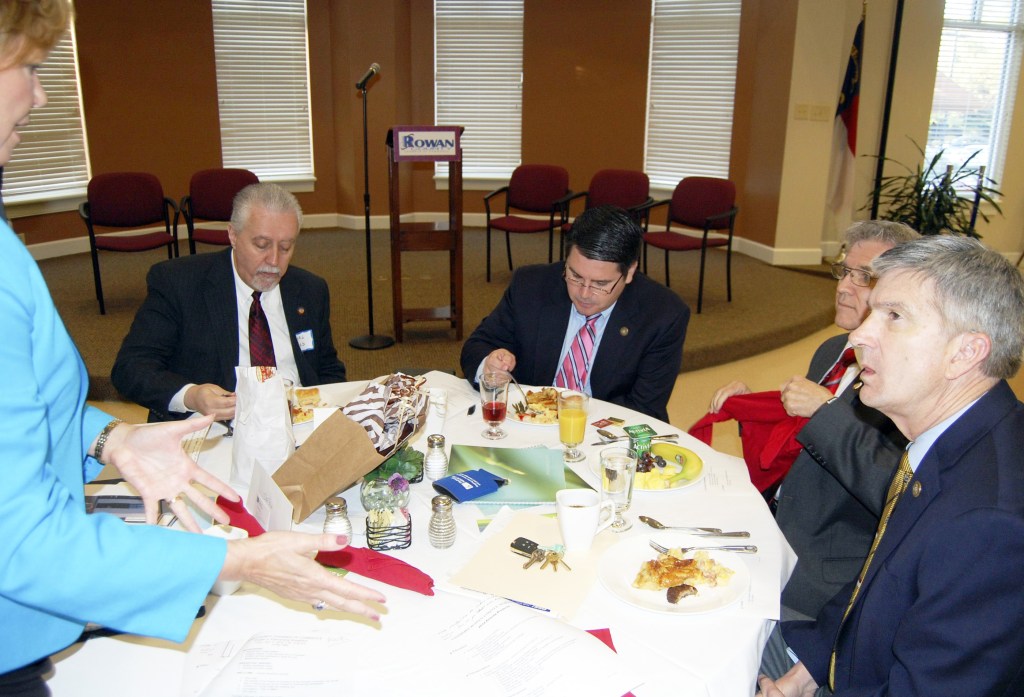 With the N.C. General Assembly’s short session starting at noon on May 14, Rowan County Chamber of Commerce officials wanted to make sure citizens received an update from the county’s delegation prior to the return to Raleigh.
Dozens turned out Thursday for the Chamber’s “Power in Partnership” legislative breakfast at Trinity Oaks.
Sponsored by Piedmont Natural Gas, the event brought together two state representatives and two state senators — N.C. Sen. Andrew Brock, R-Davie, and N.C. Sen. Gene McLaurin, D-Richmond, as well as N.C. Rep. Carl Ford, R-Rowan, and N.C. Rep. Harry Warren, R-Rowan.
“This is an event that allows us as chamber members to catch up with our state legislators before they head back to Raleigh,” said Tim Norris, chairman of the chamber’s government affairs committee.
The four legislators were limited to five minutes apiece to touch on the chamber’s priority projects this year, including those relating to education, transportation, economic development and tourism.
“We funded education at the highest level ever in the history of North Carolina. Some people will look back to 2008, but that money included federal stimulus money,” Brock said. “Unlike federal government, we can’t print our own money, but we were able to put as much money as possible into education.”
With the state’s new transportation formula, Brock said more money is going to come back into the area for construction projects.
“Now that the Yadkin River (Veterans Memorial) Bridge has been replaced, we have to finish up the projects in southern Rowan County and make sure we get (Interstate 85) free-flowing,” Brock said.
Legislators rewrote the tax code last year — a move Brock said took the state from 44th in the nation to 17th in terms of business tax environment.
“That’s how we get businesses to move in. We put more money in their pocket so they can start hiring and bringing people on,” Brock said.
Brock said his “baby” over the last four years has been regulation reform.
“Every year, we run another regulation reform bill where we see these regulations standing in the way of businesses,” Brock said.
McLaurin said he will do anything for Rowan County’s citizens, and healthy debate in Raleigh between lawmakers is crucial to coming up with decisions that are best for constituents.
A budget is about priorities, McLaurin said.
“Whether it is a personal budget at home, church budget, business budget or state government budget, it is about priorities,” McLaurin said. “North Carolina has a $20 billion budget. We’ve got to make sure we spend your money wisely. That is our top priority in Raleigh.”
If all 120 House members and 50 senators agreed all the time, McLaurin said, the public would not get what they deserve.
“Education is a major driver of economic progress in our communities and within our state,” McLaurin said. “I’m a strong believer in our public education system.”
More resources need to be directed toward community colleges — institutions McLaurin said are working hard to train the workforce for the future.
“We have to do workforce development with new innovative programs to prepare not only those who are entering the workforce, but those that need retraining so they can perform the jobs of the future,” McLaurin said.
Ford said education “is definitely changing.”
“With Common Core, you hear from parents and most people who don’t care much for it. You hear from administrators and some other parents who really think it is great,” Ford said. “(On Thursday), we’ll have our final meeting on Common Core. There may or may not be legislation drafted from that.”
Widening Interstate 85 and getting rid of the “big bottleneck” also is a priority for Ford.
Ford said the legislature has accomplished lowering both corporate and income taxes.
“There is another round of those next year, and more on the way,” Ford said. “We’re trying to help businesses and get government out of the way so they can expand and grow without more government regulations and more government red tape. To me, that is the most important thing.”
Warren said there are three things lawmakers can do in Raleigh to help their local communities — listening to constituents, ensuring the existence of an educated workforce and coming back to revisit the decisions they have made.
Over the last three years, Warren said, he has listened and reached back to his constituents for input on issues coming before the legislature.
“When you get up there, you are expected to know everything from puppy mills to hydraulic fracking,” Warren said. “If you don’t reach back to the local folks who are engaged in these things, you just don’t know what the impact of your actions may be.”
Education is one of the “three legs of the milk stool” in the effort to move any county forward, Warren said.
The Rowan-Salisbury School System has to be perfectly funded and well enough to attract new teachers and retain the superior teachers currently working there.
“It’s also important to make sure we take care of Rowan-Cabarrus Community College. When Freightliner calls people back to work after a long absence, our college is there to help retrain these people and help with local companies that do come here to help set up programs for training, alleviate the costs for that and help get our people in those positions,” Warren said.
Coming back to check how legislation has affected various stakeholders in the community is a vital part of being an elected state official, Warren said.
“A lot of times, you need to come back and look not just to see if the legislation you proposed in the past has met its objectives, but also if it had unforeseen consequences,” Warren said.
It is not a point of embarrassment to acknowledge an issue should have been thought through a little better and should be revisited, Warren said.
“When you look at economic development, you have to not only consider a tax environment that is attractive and competitive,” Warren said. “Businesses also look at the cultural and educational environment.”
Contact reporter Jim Holt at 704-797-4246.