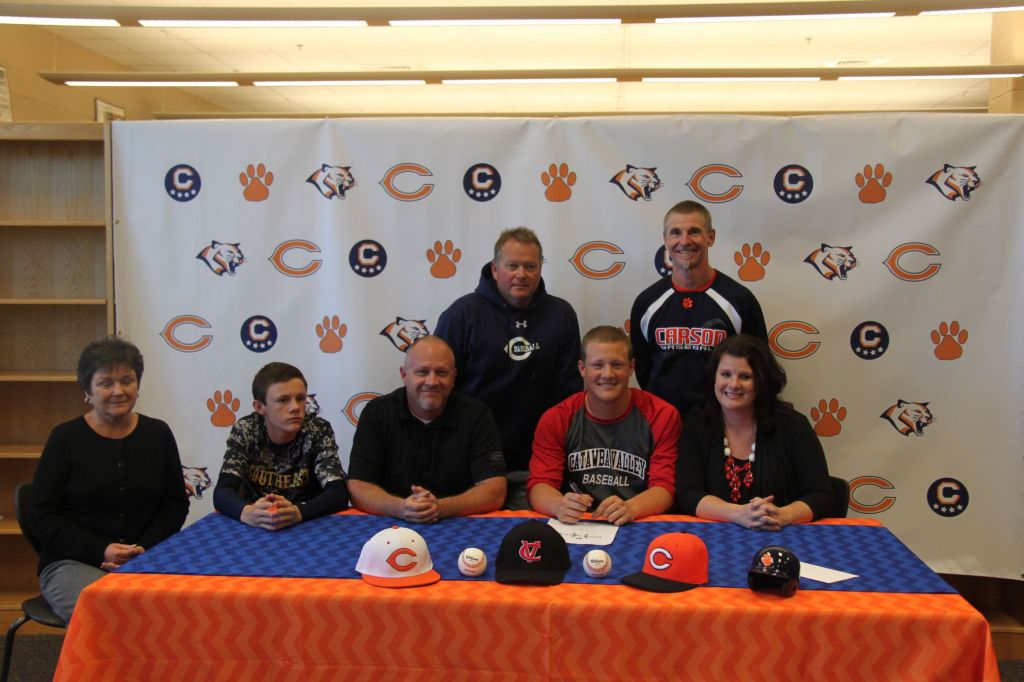 CHINA GROVE — Carson catcher Bryson Prugh has been introduced by P.A. men who are unfamiliar with him as everything from Brinson Pug to Bryan Pugh.
Through it all, Prugh — it rhymes with two — has maintained a good sense of humor, a good batting average and a good percentage as far as throwing out basestealers.
Prugh signed last week with Catawba Valley Community College in Hickory, not because of grade issues, but because he liked it and because he believes he can develop into a Division I catcher for a Southern Conference or Big South school in two years.
“He had Division II offers, but Bryson fell in love with CVCC and he really liked CVCC coach Frank Pait, who is a tremendous man,” Carson coach Chris Cauble explained. “Bryson is going there with a plan and he’ll play for a great program.”
In 2012, CVCC won 40 games and went to the D-II Junior College World Series. West Rowan graduate Brett Huffman, who is now starting at UNC Pembroke, played a key role on that team.
It used to be that Division I programs relied heavily on players they could develop for four years, but as Cauble pointed out, more and more junior college kids are being recruited by the big boys.
“Sometimes a D-I school needs a guy who’s ready to play right away, who already has two years of experience, and who is more mature than a high school kid,” Cauble said.
Cauble has watched Prugh mature. Bryson’s mother Crystel kept Cauble’s kids, Blake and Kristen, back in the day, so Cauble knew Prugh before he was 2.
“I’ve known Bryson since he was in diapers,” Cauble said. “I’ve seen him play his whole life. I remember him in T-ball, so seeing him sign with a college is pretty special. It’s going to be fun watching the rest of his journey.”
Prugh first put on the face mask and shinguards in his early baseball days.
“It’s true you’ve got to be about half-crazy to catch,” Prugh said with a laugh. “But I started to really love it in seventh grade,”
The first time most fans saw Prugh was when Cauble put him into the varsity game at East Rowan in 2011, his freshman year. Carson’s starting catcher Joseph Basinger was sick and couldn’t make the trip to Staton Field, so Prugh, a jayvee, moved up to second string.
Prugh went 0-for-1, but that boxscore shows caught stealings for two Mustangs, so it was mostly a positive experience for him.
“I know he was scared to death,” Cauble said. “But he did a good job.”
By his sophomore year, Prugh was a combination catcher/DH for the Cougars. His talent was obvious, but he still had thigngs to learn. Cauble made him mad a few times.
“Coach was a catcher himself, so he probably was tougher on me than anyone,” Prugh said. “But he pushed me and inspired me, and I would never have wanted to play for anyone else. It’s been amazing playing for him and getting to catch guys I grew up with, like Colton Laws and Dillon Atwell.”
Prugh’s three homers his sophomore year led Rowan County. He drove in 18 runs and made all-county.
As a junior, Prugh boosted his numbers to a .360 batting average and 20 RBIs and repeated on the all-county team. Prugh only hit one homer that year, but it was memorable. It came in a win against East Rowan, as the Cougars ended a 16-game losing streak against their nemesis and went on to take their first conference regular-season championship.
“It was hard to beat that feeling,” Prugh said. “It’s still the only time we’ve beaten East, but to be part of the first Carson team that beat them will always feel special.”
Prugh is batting .302 with a homer (in a big SPC win at South Rowan) and eight RBIs so far this season. As is the case with all catchers, his offense is secondary to his defense. He’ll always be a threat to hit one out, but he focuses on receiving, throwing and handling a special pitching staff.
“I’ve always been able to hit OK, but right now I’m probably a better catcher than a hitter,” Prugh said.
Carson (14-4, 10-4 SPC) has good arms in Laws, Atwell, John Daugherty, Heath Mitchem and Dylan Snider and will take a 2.31 team ERA into the F&M Bank Classic Easter Tournament in Kannapolis. Carson has posted four shutouts, two 1-0 victories and some eye-popping numbers. Laws has fanned 41, while walking three.
“It’s been a great experience watching Bryson improve each year,” said Laws, who has signed with East Carolina. “I think he’s got the potential to be whatever he wants to be.”
Prugh said Pfeiffer and Belmont Abbey were potential destinations before he visited CVCC.
“Sometimes you just walk into a place and everything feels right and it felt right with Coach Pait and Coach (Paul) Rozzelle,” Prugh said. “The recruiting process was a little nerve-wracking, but the biggest thing is I get to keep playing the game I love.”