A quiet Night Out 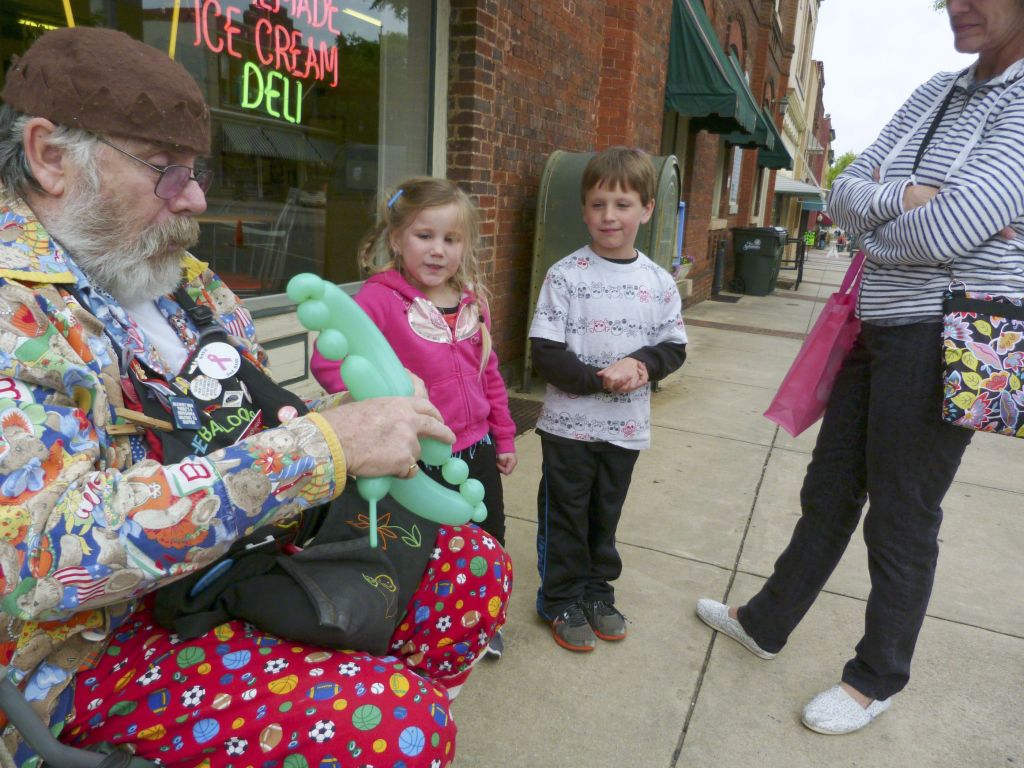 For those who braved cold weather and cloudy skies, Friday’s Earth Night Out proved to be a laid-back event. New activities such as a rock climb and an Easter egg hunt for the kids were available, without the usual crowd.

And in honor of Arbor Day, Downtown Salisbury Inc. was handing out free zinnia seeds and saplings to the crowd. Camille and Steven Butner manned a table on the square for the first hour of the Night Out. Steven offered thin green cypress saplings to everyone who crossed the street. The pair started off with 150 saplings and estimated that nearly half of them were given away in the first half hour.

“Some people are concerned about how big the cypress tree gets, but it’s been good,” Camille said.

On the corner of Lee and East Fisher streets, adventurers could try their hand at rock climbing, free of charge. Ronnie Burridge of Salisbury had never been on a rock wall before, but decided to test his mettle early in the evening.

“It was a little scary coming down, at first,” he said.

When climbers reach the top, they’re supposed to press a buzzer and then do something that goes against instinct—let go of the wall. Burridge said he thought he was going to fall, but came down all right in the end. After a moment to mull it over, Burridge went right back up — this time by a more difficult route.

Burridge wasn’t the only one to try the rock wall, though. Robert Jones gave climbing a shot while his girlfriend, Hailey Smith, shot a video. Jones said he was afraid of heights, but he made it to the top.

Smith and Jones moved to Salisbury at the beginning of the year, and this is their first time attending a Night Out. While initially reluctant because of the cold, they said they were enjoying themselves and commented on all the good food available. Smith said that so far, they liked living in Salisbury.

“It’s a nice little place to settle down,” she said.

On a bench near Innes Street Drug on South Main, Joseph Heilig showed off a large binder full of pencil portraits and gave drawing advice to kids who stopped to flip through its pages. Heilig said he used to do construction work, but when demand for the jobs died down this past winter, he had to think of something else to pay the bills. Now, he frequents the Nights Out and offers to do quick sketches for passerby.

Heilig estimates that he’s done over a thousand pieces in his life, and plans to do many more. When anyone compliments him on his art, he smiles.

“It amazes me, sometimes,” he said.

On Fisher Street, Cathy Basinger and Carol Worthy were waiting for hotdogs from the Hap’s Grill hotdog stand. Worthy said she hadn’t missed a night out since she moved to Salisbury in 2011. Basinger agreed.

“It’s a little cold out,” Worthy said, and mentioned that she was worried it would rain.

If it did, she said, it wouldn’t stop anyone — she recalled a Night Out a few years ago when there was a torrential downpour, but people moved inside to the shops and still had a good time. Basinger was not so optimistic.

The threat of rain and the cold temperatures prevented many Salisbury residents from coming in the first place, and wet weather later in the evening sent many scurrying for cover.

For those who dressed warmly and came early, however, it proved to be a good evening.

The Grooms family was having a great time. Christie and Paul Grooms with children Melanie and Noah potted tomato plants and geraniums before they went to look for Easter eggs in local stores.

Melanie heard about the Egg Hunt on Facebook, and looked up the list of shops that had goodies herself, so she and her brother could get a head start. The Groomses are from Rockwell, but they never miss a Night Out.

She said that Salisbury’s Nights Out remind her of similar community events in Charlotte, and Paul commented that the Nights Out had changed a lot from their early days. Now, they offer a lot more activities for kids, and are more family-oriented.