The bridge fears me. 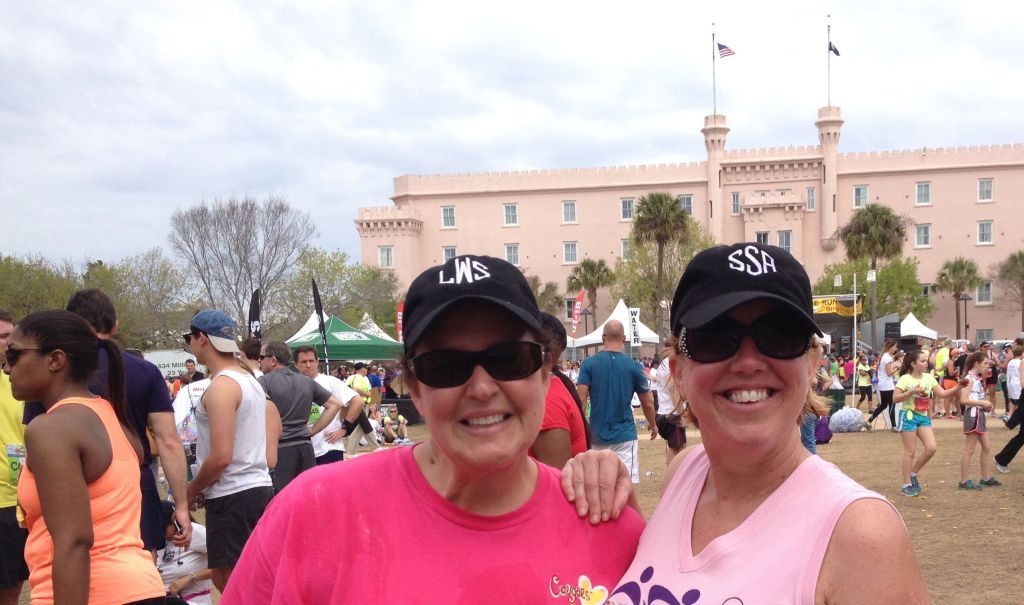 CHARLESTON, S.C. — The bridge fears me.

For months, my running partner, Laura Whitley, and I had been preparing for the Cooper River Bridge Run. Laura lives in Mount Pleasant, S.C., and had graciously allowed me to stay with her last year during the 2013 race. Before that, the last time I had seen her was at summer camp, just after we graduated from high school. It had been awhile.

We had a wonderful time, but this past fall, I said something to her to the effect of, “OK, girl, get your butt in gear and run with me in the spring.”

Sure enough, she did. She had not previously been a runner per se, but started a Couch to 5K program and went from there. I checked in with her from time to time. The next thing I knew, she had lost 28 pounds and her pace was better than mine. That’s when I realized I had better get MY butt in gear.

To be fair, her training season was way better than mine. We’d have a few decent days here, then rain then snow. Lather, rinse, repeat.

I spent a lot of time at the J.F. Hurley Y. I found out the first time I ran the bridge that you have to go on the uphill slope at 4 percent for 1.25 miles. The second time I ran it, I set the treadmill at 8 percent, figuring it’d be twice as easy once I got on the bridge.

Yeah, right. I don’t think I did that as much this time. To be honest, I don’t think I trained as well as I did before. My thinking was, hey, I’ve done this twice, I can do it a third time.

There were, of course, some variables. First of all, I was four years older than the first time. Second, I was still interested in beating my previous times. Third, Laura and I made a pact to run together. Granted, race day would be the first time we’d actually be running together, but in comparing times, we figured our pace was about even.

Laura and I arrived at her house about the same time on Friday afternoon. The plan was to take my car downtown so we wouldn’t need anyone to ferry us back across the bridge on Saturday afternoon. I wisely suggested we take a change of clothes. A lot of people run the race and then stroll around downtown Charleston the rest of the day. I was not going to be one of those people.

We finally found a parking deck in 5 o’clock, Charleston rush hour. Traffic is pretty bad anyway, but considering 40,000 people were in town for the race, it was even worse. We dropped off my car, then went to find someplace to carbo-load. Unfortunately, for all the planning we’d done, we didn’t decide where we were going to eat Friday night. Whoops! We ended up eating shrimp and pasta back at Laura’s house, which was pretty dang good.

We decided we’d leave by 6:30 the next morning to be at the race staging area in time. We wondered how we’d sleep that night.

We’d been watching the weather all week, but on race morning, there was absolutely no threat of rain. It was in the mid-60s when we left for Charleston. We wore our running shirts and shorts, our race bibs and matching black hats Laura had bought for us. On the front are our individual monograms. On the back is our running slogan I’d come up with weeks before: The Bridge Fears Me.

A friend who lives in Laura’s old neighborhood was kind enough to shuttle us over to our running corral. Race director Julian Smith has developed a “wave” start over the years, which is pure genius. Runners sign up by estimated running times; we’re then placed in groups or “corrals,” and each corral starts a few minutes after the previous one.

There was only one problem to this great system as far as we were concerned. I registered back in October, and Laura didn’t register ’til sometime in January. That meant we were in separate corrals. Unfortunately, you can move back but you can’t move up. So off we trucked to Corral K, the VERY LAST CORRAL.

The only problem with being in the last corral was that we had to wait about an hour after the start of the 8 a.m. race to cross the start line.

Finally, right at 9 a.m., we took off. We were going at a great pace, a little too good, in fact. I had to stop after mile 1 and mile 2 to stretch out my shins. After that, they were OK. The thing about running with 40,000 of your closest friends is that there’s fantastic energy and adrenaline in the air. When Laura and I run, neither of us can do much chatting, unlike David Freeze, my good friend-slash-running coach. He can tell a story at the start of our run and by the time he’s finished, our run is over. But Laura and I did check in with each other occasionally to see how the other was fairing.

Then it was time to climb that bridge. Our first two miles were right on the pace we wanted. Our goal was to run the race in 80 minutes. We started climbing the bridge and walking briskly. At the top of the bridge was the halfway mark. Our split time was good, I told Laura.

I have to admit, once I hit the downhill slope, I took off. I tried my best to channel my mother, a longtime runner, who never “pussyfoots around” during a race. The rest of the race wasn’t too bad, although it got noticeably warmer once we hit downtown.

I turned this corner and that, and finally saw the finish line. Hallelujah!

According to my watch, I finished in 1:22:31, and Laura came in just a few minutes behind me.

We changed clothes in the parking deck and walked around downtown Charleston. Laura wanted to take me to the market and to the Tervis tumbler store. Now, if you don’t have a Tervis tumbler, you must get one. It’s just the best insulated plastic cup there is. I purchased one for myself and one for Laura. They both had a 13.1 patch on them — we’d decided that we were gonna run the half marathon in Myrtle Beach in October next.

From there, it was out to Sullivan’s Island to Poe’s Tavern for the best burger I’ve ever eaten.

It was a great day.

I talked with Julian the next week. He sounded exhausted but was gracious enough to spend a few minutes answering my questions.

“It’s a fun weekend in Charleston,” he said of the race, noting that it has a $30 million impact on the community.

So far, he said, feedback from the race has been all good. An online survey is still open. There were 40,000 registrants, and 32,000 people finished the race.

“It was very smooth,” he said. “The corrals went perfectly this year.”

When I asked him about increased security following the Boston Marathon bombing, Julian gave me a surprising answer. “We’ve been doing a lot more security with the race since 9/11. We’re twice as big as Boston.”

I told him the security presence seemed even more visible this year. Laura and I saw law enforcement at every intersection we ran through, as well as all along the bridge. We saw a Coast Guard helicopter fly by when we were at the top. We felt extremely safe.

Julian noted the guard was involved, as well as the National Guard, the South Carolina Highway Patrol and law enforcement officers from the three surrounding towns.

“There was a lot of undercover work, too,” he added. “Y’all just didn’t know it.”

That included undercover officers who actually ran the race. (I started to recommend an SBI friend for the job, but I didn’t think he’d appreciate it.)

Julian said that registration opens soon for the next race, which takes place March 28, 2015. I’m logging on daily to check. Laura and I plan to register together this time.

The Monday morning after the race, I packed up and headed home. Laura had gone on to work. She is an elementary teacher, and says she’s starting her half marathon training over spring break. David says we don’t really have to start training until June. But at this point, we don’t really want to slack off any.

Driving across the Don Holt Bridge, I glanced over my left shoulder to steal one last look at the Cooper River Bridge. It was shrouded in fog. I wasn’t surprised.

Because the bridge fears me.