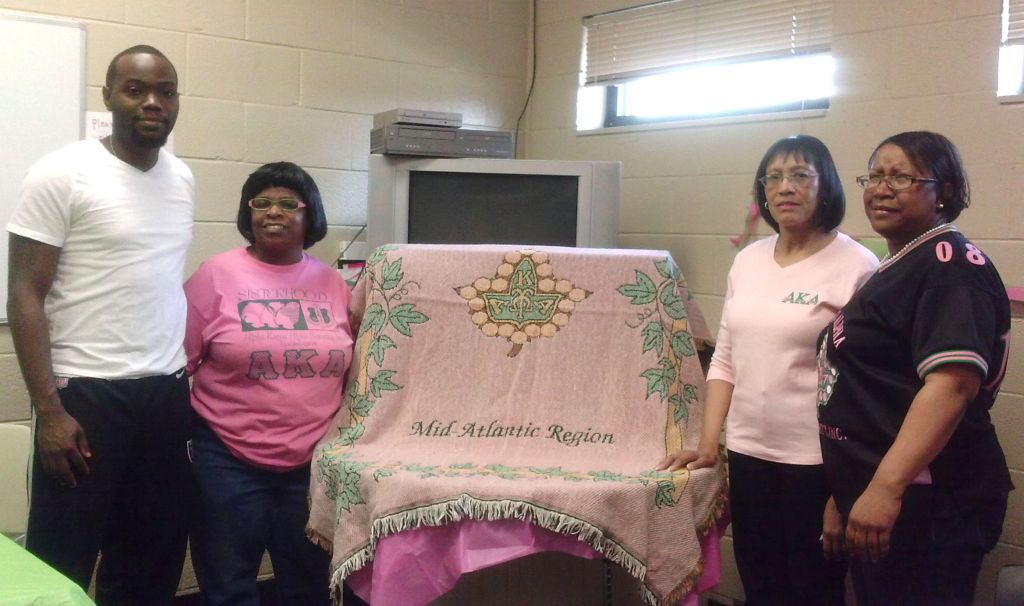 Salisbury Mayor Pro Tem Maggie Blackwell was featured speaker at the Annual Brunch of the Salisbury Branch of the American Association of University Women (AAUW), held at the Salisbury Country Club on Saturday, April 12.
Also in attendance were Sandra Sims-Campbell, candidate for register of deeds (Dem.) and Constance Johnson, candidate for N.C. State Senate District 34 (Dem.)
AAUW is a national non-partisan organization that addresses equity for women and girls through advocacy, education, philanthropy and research.
Livingstone College recently became an institutional affiliate of AAUW and was represented by Dr. Lea Vickers, dean of academic affairs, and Dr. Kathryn Moland, professor of computer information systems.
Blackwell opened her presentation by referring to AAUW’s trail-blazing role for women. In 1919 AAUW members raised $156,413 to buy one gram of radium for Marie Curie. Her radium research led to a Nobel Prize in Science. “In today’s dollars, that represents $2.2 million,” according to Blackwell.
Blackwell’s talk on “Successful Women in a Male Dominated Industry” included a slide presentation with examples of her own life’s experiences in business and public service. She shared several quotes from important women in her life, including “No one can make you feel inferior without your permission” from Eleanor Roosevelt, and “No one is ever worth losing your dignity” from Betty Azbell, Ms. Blackwell’s mother.
AAUW Salisbury Branch president Kathy Pulliam introduced Livingstone student Tonya Stewart as this year’s recipient of a $500 scholarship from the branch to attend the National Conference for College Women Student Leaders, to be held in June at the University of Maryland. Ms. Stewart is a junior studying computer information systems.
Founded in 1881, AAUW is one of the nation’s leading voices promoting education and equity for women and girls. Its most recent publication, “The Simple Truth about the Gender Pay Gap” is available for free through the Salisbury Branch.
For more information contact Kathy Pulliam, kathy@mkpulliam.com, 704-636-6082 or http://salisbury-nc.aauw.net
The members of the local chapter of Alpha Kappa Alpha Sorority Inc. recently presented Miller’s Recreation Center on West Bank Street with a flat screen television. The gift was in gratitude for the continued partnership between Miller’s Recreation Center and Delta Xi Omega chapter. The two entities have worked together sponsoring tutorial sessions, mentoring programs and self-awareness workshops for the past 15 years.
The chapter used the facility to donate school and arts supplies and give reading books to community children. Also, the chapter donated a Reading Center at Miller’s from a grant the chapter secured from RIF.
Larry Jones, recreation program director for the Salisbury Parks and Recreation Department, thanked sorority members for their generosity and dedication. Assisting chapter President Renese Bates with the presentation were Teresa Adams, fundraiser chairman, and Lillian Morgan, chapter vice-president.

Founder’s Day was recently celebrated by the local chapter of Alpha Kappa Alpha at the Community and Business Center on West Bank Street. Members of the Delta Xi Omega chapter observed the founding of the sorority during the regular monthly meeting. Special Observance Committee chairman Suzette Davis led the members in a flashback of history. Other committee members, including Shelia Brown-Miller and Yolanda Woods, assisted by highlighting the lives of the original founders of Alpha Kappa Alpha Sorority through a skit.
A video entitled “History of Twenty Pearls” was shown during a catered luncheon. Special recognition was given to three members for the years of membership, dedication and service: Lillie Nelson for 67 years, Jewell Holland for 63 years and Sarah Lightner for 53 years. The members of the local chapter have a combined total of 500 years of membership.
Alpha Kappa Alpha was founded on the campus of Howard University, Washington, D.C. in 1908. The sorority is an international service organization and is the oldest Greek lettered sorority established by African American, college educated women in America. The sorority is dedicated to improving the quality of life for citizens locally, nationally and internationally.