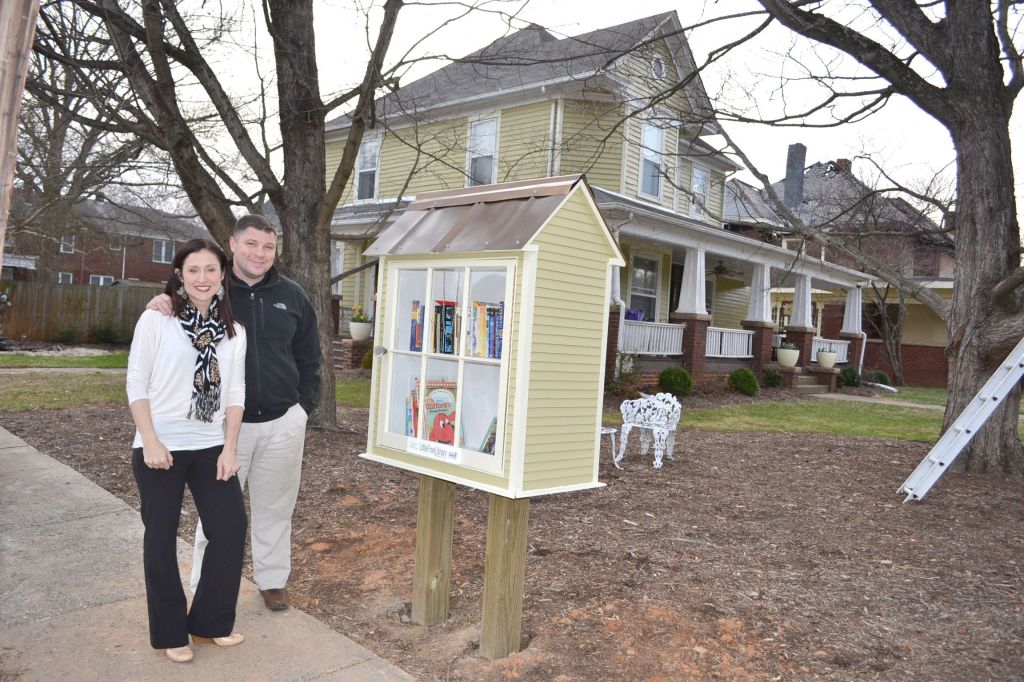 F or book lovers, magic sits on two sturdy posts at the corner of Mitchell Avenue and Fulton Street.
Full of books for both children and adults, the structure is, officially, a Little Free Library, one among thousands registered in this country and around the world.
The idea for this particular library came from bibliophile and Catawba College English instructor Shelley Palmer; the execution was up to her husband, Jon. Shelley was introduced to Little Free Libraries through a link on Facebook, and when Jon asked her in January what she wanted for her birthday, she knew just what to ask for. She and Jon started looking at models and samples online, and then Jon got to work.
He started with a window from Greyshores Trading Co. (now Zinc) and constructed the rest of the library around it. The handle is a vintage glass doorknob from Okey Dokey General Store. Jon and Shelley wanted the library to complement their home, so Jon took paint chips to Lowe’s so he could match the spring-like colors of their house.
The project took a little longer than anticipated — Shelley’s birthday came and went — but one rainy Sunday in March, Jon and Shelley mounted the library on posts near the edge of their yard so it would be easily accessible to those passing by. After it became apparent that Jon’s caulking job would keep the library’s contents snug and dry, Shelley loaded the shelves with books and hoped neighbors would come and check it out.
But they wouldn’t have to actually check out the books — no library card is required and no fines are ever levied.
“It operates on the ‘take a book, leave a book’ spirit of lending,” says Shelley, who has been surprised by how her birthday gift has taken on a life of its own.
The rules are pretty simple. Books are free for the taking but they shouldn’t be resold. You can return books to the Little Free Library after you’ve read them, but you don’t have to. You are encouraged to contribute your own books as well.
Always the teacher, Shelley is pleased that the library is poised to serve students after the school year is over.
“Students need to have those books out there at the ready for summer break,” she said.
Neighbors have been curious and enthusiastically supportive. Cars pull over to see what’s in the cute little house. Walkers pause to admire the library’s craftsmanship and scan the shelves for works by their favorite authors. Friends and neighbors, including a kindness-spreading group of women called The Dancing Phalangies, have shown up with books to share.
One of the first visitors was young Eva Carter, a voracious reader who came with her grandmother, Merry Overholser. They live in Fulton Heights, and Eva was excited to get some new books from such a cute little library.
“We’re enthusiastic patrons,” Merry says.
The increased activity near their house is a source of entertainment for Shelley and Jon’s sons Harper, 6, and Hampton, 4, who have been “super excited” by the project, Shelley says. The boys love to keep an eye out for “customers” and will often go out and chat them up. They’re used to interacting with their neighbors like this; in the summer, they run a free vegetable stand in the front of their house.
It’s not surprising that Fulton Heights would embrace a gift like the Palmers’ Little Free Library. The historic neighborhood is a friendly place, full of folks who get together for Halloween parades, Easter egg hunts, group dog walks and sidewalk chats. The library — the only one of its kind in Salisbury — fits in perfectly. It heightens an already strong sense of community. It’s a grace note for the neighborhood.
It’s a little bit of magic.
g g g

The roots of the Little Free Library go back to 2009, when Todd Bol of Hudson, Wis., constructed a model of a one-room schoolhouse, filled it with books and mounted it on a post in his yard. It was a tribute to his mother, a former schoolteacher and lover of reading. His neighbors loved it. He built a few more to give away, and the idea took off.
Little Free Library is now a thriving non-profit organization. The group’s website estimates that in January of 2014 there were more than 15,000 Little Free Libraries around the world, from Brazil to Australia to Germany to Ghana, with thousands more in the works.

For more information, go to www.littlefreelibrary.org

Colton Sherrill’s musical talents put the icing on the…