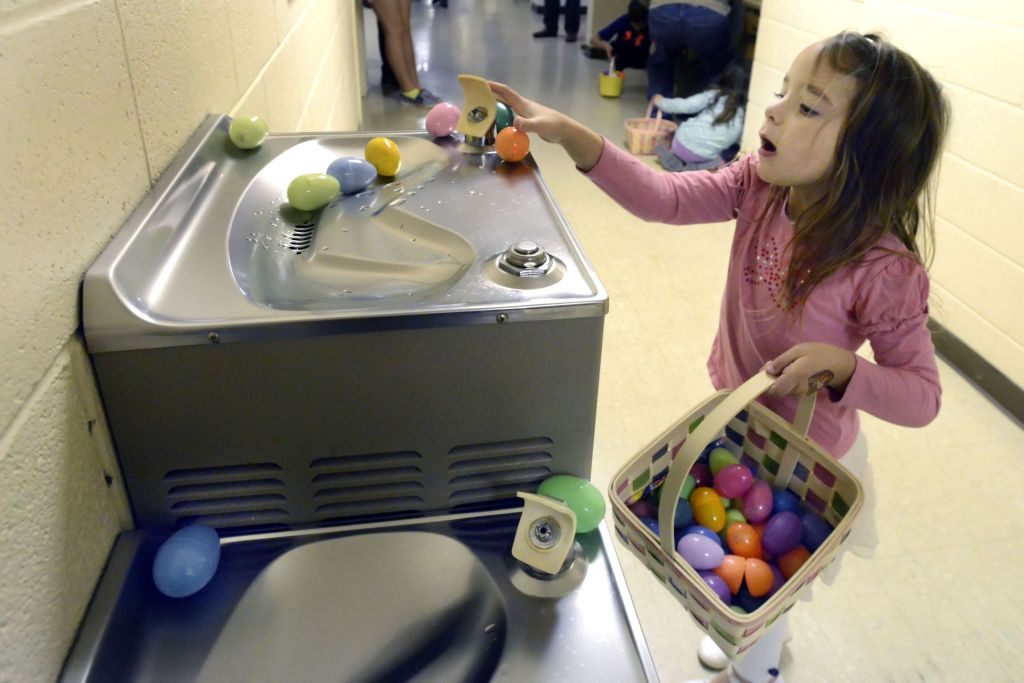 Landmark Church in Salisbury didn’t allow Saturday’s gray skies and soggy weather to stand in the way of the annual Easter egg hunt — organizers simply moved the celebration inside.
The church has hosted an Easter egg hunt every year since 1985.
“We try to shake it up every year,” said Cathy Faucette, who helped organize the event.
The weather certainly helped with that this year, she said.
Malachi Smith, a 9-year-old attendee of Landmark Church, said things were different from normal this year.
“This time it was an inside Easter egg hunt,” he said.
The indoor atmosphere didn’t seem to dampen his enthusiasm, however.
Smith said his favorite part was finding the eggs and eating candy.
Traditionally, the church’s Easter egg hunt is held outside. The children play on the playground, complete activities and, of course, go on an outdoor Easter egg hunt.
But sometimes, as Faucette said, “you have to improvise.”
“We thought it might slack off this afternoon,” she said, but that never happened.
So, they decorated tables with pastel tablecloths, Easter basket grass and candy. Children played indoor games, colored and ate Easter snacks. The Easter bunny visited, as did the famous Bible character, Mary Magdalene.
When it came time for the Easter egg hunt, volunteers had the children line up and close their eyes, then led them down a hallway filled with more than 400 eggs. When the children opened their eyes, they frantically scurried around the hallway to pick up as many brightly colored plastic eggs as they could. The eggs lined the hallway, balanced on door hinges and were under water fountains.
Faucette said the number of attendees varies from year to year, based on how many other Easter egg hunts are going on nearby. Last year, roughly 124 kids showed up, and the year before even more attended.
This year, only 15 or so children came. But, Faucette said, the church never cancels its Easter egg hunt.
Although Faucette said the church wants to provide entertainment and memories, her primary goal is to “get the Easter message across.”
If that happens for one person, “we’ve accomplished something,” she added.
Isabelle Barnhardt, 8, said she and her brother came because “we love Easter egg hunts because you get candy and it’s so much fun.”
Barnhardt’s great-grandmother attends Landmark, and Faucette said she remembers Barnhardt’s mother attended the Easter egg hunt as a child as well.
Three-year-old Triston Ferrell was excited about the candy he collected.
“I got this many candies. These are my best candies. I’m going to eat them all,” he exclaimed, showing off the candy filling his Easter basket.
Easter egg hunts at the North Carolina Transportation Museum, Dan Nicholas Park, Lazy 5 Ranch and Dunn’s Mountain Baptist Church were canceled by Saturday’s rain.
Immanuel Lutheran Church in Rockwell delayed its Easter egg hunt until today at around 8:45 a.m., after the church’s Easter breakfast.