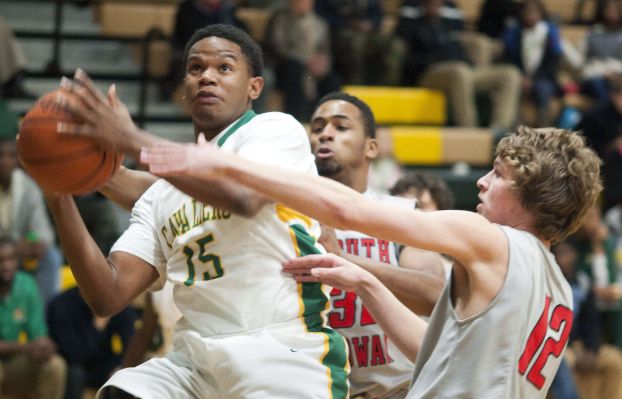 Bowman moving on to JC Smith

SPENCER — It probably seems like Michael Bowman’s been around forever at North Rowan.
The senior had his own dessert made for him at North’s basketball signing day celebration and it’s symbolic of a prep career where he’s had his cake and ate it too.
If you look back at the state championship clippings from 2011, there Bowman is, hanging out with his head on the front page of the Post the day after North beat Pender County for the 1A crown. His future impact was unknown at the time, but North coach Andrew Mitchell knew he had a guy who’d help him for the next three years.
“The first day I saw Mike was summer workouts the first year I was here,” Mitchell said. “I didn’t know anything about the guy but I could tell he was going to be a really good player.”
What neither Mitchell nor Bowman knew was that it was the greatest stretch in North basketball history. The Cavaliers have won 100 games along with four conference championships, four conference tournaments and reached the regional three times and the the state title game twice.
“I was privileged my freshman year to win a state championship,” Bowman said. “Junior year we have a team full of superstars and we came up short but fought until the end. This year, we weren’t the most skilled group of guys but we were really good. I love my teammates.”
Bowman came to Spencer from Washington D.C. in middle school, made good friends with Michael Connor and stood out on the floor.
At Smith, he’ll be paired up with former teammate T.J. Bates, who committed the same day unbeknownst to Bowman.
“Without even talking to him, he committed that afternoon and I committed that night,” Bowman said. “Coach actually told me T.J. comitted earlier and I immediately texted T.J. ‘it looks like we’re gonna be teammates next year.”
Bowman went to the CIAA Tournament in 2012 and was impressed by the atmosphere. Bowman says Smith offered him a scholarship as a junior and has been in contact off and on since then. Mitchell was an assistant at J.C. Smith in the 90s before a stint with the Livingstone women’s team.
“Coach was pulling strings for me all year,” Bowman said. “He’d been trying to get me in. Johnson C. Smith wanted me to commit early.”
Bowman didn’t feel ready to commit his junior year, but he has come around
“After analyzing it, it’s a great fit for me,” Bowman said. “It’s close to home. I’ll be able to play as long as I stay focused and work out.”
It makes sense JCSU’s surname is the Bulls, because that’s what Bowman resembled driving through the lane. When he put his head down, there weren’t many guards that wanted to get in front of the 6-foot-4, 220-pounder.
His freshman year, Bowman played on the varsity team, scoring double-digit points five times and helping the Cavs to a win in the state semifinal against Winston-Salem Prep. Bowman scored seven points against Pender County in the championship.
In 2012, The Cavs cruised through the 1A Yadkin Valley Conference slate with the biggest opposition being a South Davidson team that featured Austin and Taylor Hatfield. North fell in the sectional final to Monroe in a thriller. Last year, the Cavs reached the regional again and took WSP to double overtime before falling.
Bowman was the MVP of the regional last month and made the go-ahead shots in both games. He was an All-County pick his junior and senior seasons and part of the big three that included Michael Connor and sophomore point guard Jalen Sanders this year. Bowman averaged 13.4 points a game this year.
On some loaded teams that shared scoring duties, Bowman didn’t wow you with point totals most of the time. That said, he surpassed 1,000-career points in the championship game against Kinston last month.
“We came up short, but we played a really good game,” Bowman said.
Bowman carries a 3.3 GPA and wants to major in sports medicine.
“I need to prefect my jumpshot and keep working on everything,” Bowman said. “There’s always room for improvement.”

Edwards will play at George Mason