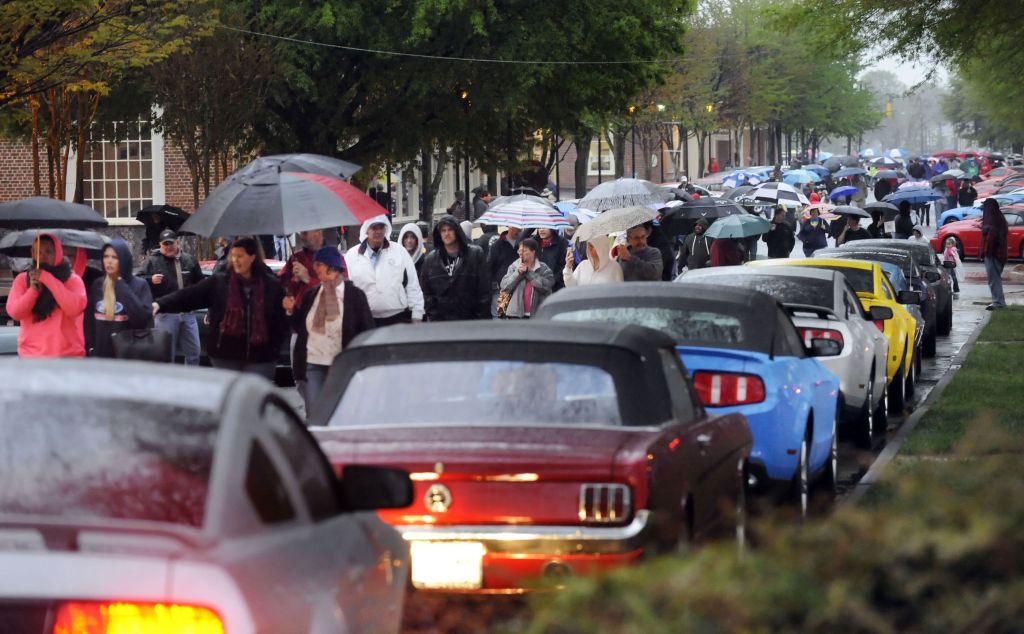 KANNAPOLIS — One after another, rumbling and revving, a world-record challenge rolled into Kannapolis on Friday.
Ford Mustangs of all ages, led by a procession of ’80s-model state police cars and fire vehicles, rolled into downtown and onto the grounds of the North Carolina Research campus.
In celebration of the 50th anniversary of the sports car, the Mustang Club of America and local Mustang clubs organized a caravan from the Z-max Dragway in Concord to attempt to set a world record for the largest Mustang cruise.
The cars have been in town for the Mustang 50th Birthday Celebration, a five-day event at Charlotte Motor Speedway.
About 6 p.m., an estimated 1,000 Mustangs left Concord, driving a preordained route to Kannapolis.
The procession had originally been estimated at more than 850.
Brenda Drye, of the Cabarrus Events Association, said that number had grown in the 24 hours or so before the record-breaking attempt.
“We have over 1,000 cars registered,” Drye said.
From brand-new models to fastbacks, Mach 1’s to Shelbys, model after model was represented as the procession went on.
Others came to Kannapolis on their own, without taking part in the procession.
Lloyd Crochet, of New Orleans, ended up in Kannapolis as part of the Mustangs Across America cross-country drive, which started in San Diego.
He and his wife, Marie, drove their 2005 Mustang GT convertible. They joined the procession in Atlanta, Crochet said
Along the way, Crochet said, they met people from around the United States and other countries.
“They’ve got people from Australia, Brazil,” Crochet said.
Crochet said the Mustang is an iconic car. His first Mustang was a 1968 six-cylinder coupe, he said.
He said he sold that one many years ago. “I kick myself whenever I think about it,” Crochet said.
“It’s just the first real pony car. My uncle had a ’66,” Crochet said, “Back then, you didn’t know what you had.”
“It’s almost a cult like thing with the car,” Crochet said.
Matt Fagala, of St. Louis, Missouri, drove his 1997 Cobra to North Carolina with his sons, Tyson, 11, and Riley, 6.
“For me, it’s a once-in-a-lifetime,” Tyson said.
Matt Fagala said the family has had this Mustang for about six years.
It’s his second Mustang. “It’s the allure of the car, how fun they are,” Fagala said.
Taking part in the anniversary celebrations was a no-brainer, Fagala said. “I knew it would be a lot of fun, meet a lot of people,” he said.
Kannapolis was chosen as “the perfect spot for a cruise,” Drye said. Downtown Kannapolis is home to monthly car cruise-ins and is already known as a destination for car events, she said.
Kannapolis City Manager Mike Legg said he hoped the world-record attempt would increase knowledge of the city and perhaps draw repeat visitors, even investors.
“It’s name recognition and brand awareness,” City Councilman Roger Haas said. He and other local residents gathered under umbrellas, or huddled under awnings and trees as the rain fell.
On and on, the parade of Mustangs continued. Volunteers directed them to different points around the downtown village.
Master of ceremonies Gary Walter told the crowd that, as the first cars arrived at N.C. 73 on the outskirts of Kannapolis, “they have not all left the parking lot” in Concord.
Walter said that, if all of the cars in the parade were parked bumper to bumper, the line would stretch three miles.
Bobby Huntley, of Kannapolis, said he’d heard about the event months back.
He and others crowded the entrance to downtown at the intersection of Mooresville Road and Dale Earnhardt Boulevard.
Although he’s never owned a Mustang, Huntley said he loves the car.
“I guess it’s the style and the quality of it,” Huntley said. “It’s sporty.”
Mustang owners and spectators alike said much the same, as Kannapolis paid tribute to the American sports car’s legacy.
Contact Hugh Fisher via the editor’s desk at 704-797-4244.