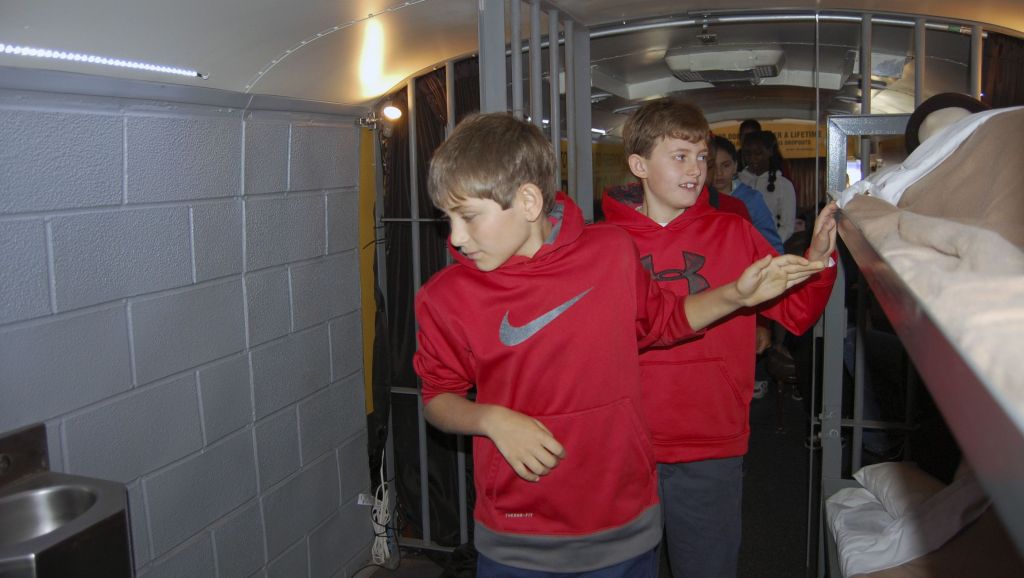 Students at Overton Elementary and Knox Middle schools were confronted with the harsh realities that often accompany dropping out of school as they boarded the Choice Bus on Friday.
School is “a place that lets you follow your dreams,” said Eryka Perry, who ran the presentations. “Education is the basis for everything.”
The Choice Bus is an anti-dropout program run by the Mattie C. Stewart Foundation.
When students entered the bus, they were in a mobile classroom that utilized the original bench seats of the bus, leaving space for a television and a presenter to stand. A black curtain hung behind the TV and blocked the rest of the bus. The side windows were covered and the inside walls were plastered with quotes touting the value of education.
Rather than just telling the students they should stay in school, Perry explained why they should.
She shared startling statistics about high school dropouts:
• The average high school graduate makes $27,000 a year, while a dropout could only dream of making that much, Perry said.
• A college education, even from a one- or two-year program, could add up to $1 million in extra income over each person’s career, she added.
• Incarceration is a likely consequence of not graduating from college — 75 percent of inmates do not have a high school diploma, she said.
Perry then showed the students a video, where inmates shared about their experiences in prison and how they wished they had finished high school.
“I regret losing my dream,” one inmate said.
Another said, “If I would have hung around with a better crowd, a crowd that was going to exceed and excel, I wouldn’t be in the predicament I’m in today.”
When the video was over, Perry swung the television to the side, and opened the curtains behind it, revealing a replica of a prison cell.
To the left, there was a metal frame bunk bed with thin pads serving as mattresses. On the right, there was a single fixture, housing both a toilet and a sink.
Typically in a cell that size, however, the toilet-sink combo would be found in the back of the cell and an additional bunk would be added on the right, housing four people, Perry explained.
There was signage on the walls, explaining the different parts of the cell.
Perry and students talked about the freedoms and privileges you give up if you go to jail, such as privacy, TV, video games and the Internet. Perry told the students that prisoners can’t even turn the lights on an off on their own.
Each student had the opportunity to walk through the cell.
“I’d like you to make a commitment that this will be the last time you walk in a place like that,” Perry said after the students returned to their seats.
On their way off the bus, students were given pledge cards with a spot to brainstorm about future careers, the education necessary and tools for realizing those dreams. It also included a pledge stating that the student would pay attention in class, graduate from high school, hang out with positive influences, follow their dreams and make the most of their education.
Overton fifth-grader Zariyah Thomas said the presentation made her realize the importance of having good friends that encourage you to improve.
“Just by making one mistake you can end up in jail for the rest of your life,” she said.
“You have to make good choices and hang around the right crowd,” added her classmate Olivia Alexander.
“The choice is yours,” Perry told the students. “Are you making choices that lead toward your dreams?”