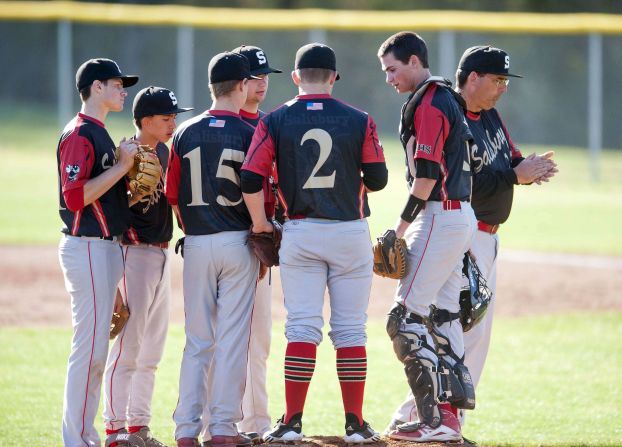 TYRO — When the opposing pitcher is introduced as “Lefty,” there’s a reasonable chance you’re in trouble.
Gloom, despair and agony continued on Thursday afternoon for punchless and luckless Salisbury, which fell 4-0 at West Davidson.
Justin “Lefty” Freeman, coming off a perfect game against Lexington, was in charge for the Green Dragons again. He struck out seven, walked none and limited Salisbury to three singles.
“I can sum up our season up in six words — you can’t hit, you can’t win,” Salisbury coach Scott Maddox said. “We lose 2-0, we lose 4-0, or we lose 3-1. We held a good team (West Davidson) to 11 hits the last two days. When you do that, you ‘ve got to be able to take one.”
Being swept by second-place West Davidson (11-6, 7-1) has placed the fourth-place Hornets (4-13, 3-5) in a grim situation.
Usually, the CCC gets four playoff berths. This time it only gets three, and Salisbury’s unexpected 1-0 loss to Lexington looms larger and larger by the minute.
“That one could bite us,” Maddox admitted. “Now we have to sweep North Rowan.”
Meanwhile, West Davidson continues its pursuit of East Davidson, which is still unbeaten in the league.
“We’re playing pretty good,” WD coach Jerry Walser said. “We’re 11-6, but we’re about five hits from 14-1.”
Five hits is about a weekly supply for Salisbury.
The Hornets got two of their three hits against Freman in the first inning.
Ryan Jones and Chance Bowden opened the game with singles, and they were running when Riley Myers hit a line drive to center field.
T.J. Eller’s shoestring catch to rob Myers was the play of the day, and he doubled Jones off second base,
“You hit a ball hard up the middle like that, and you’re sure it’s a base hit,” Myers said. “Then the center fielder comes out of nowhere.”
Had the ball gotten by Eller, the game might’ve traveled a different road.
“If he doesn’t catch that ball, Salisbury’s ahead 2-0, with a man on second,” WD assistant Jason Lemley said.
Freeman just mowed Hornets after that. A hard-hit single by losing pitcher Myers accounted for Salisbury’s only hit during the last six innings.
“I had good control of the strike zone all day,” Freeman said. “And we made some good plays defensively.”
West Davidson’s icebreaking run in the third was a thing of ugliness.
With two Dragons out and none on, Myers made a very good pitch, but Freeman blooped it down the left-field line for a fortunate double.
“Just a jam shot, but it’s a rip in the scorebook,” Freeman said with a smile.
When Chandler Simerson followed with a single, West Davidson led 1-0.
Back-to-back RBI doubles in the fourth by Graham Shoaf and Chance Fortenberry made it 3-0, and the way Freeman was pitching and the way the Hornets were swinging, it was close to over.
Three walks and a hit batsmen handed the Green Dragons their swing-less final run in the sixth.
Myers was in constant trouble because of seven walks, but he battled and stranded 11 Green Dragons on the bases.
“I’m not mad, and I can’t fault our effort,” Maddox said. “We’ve just gotten ourselves into a bad rut offensively, and it’s been hard to break out of it.”