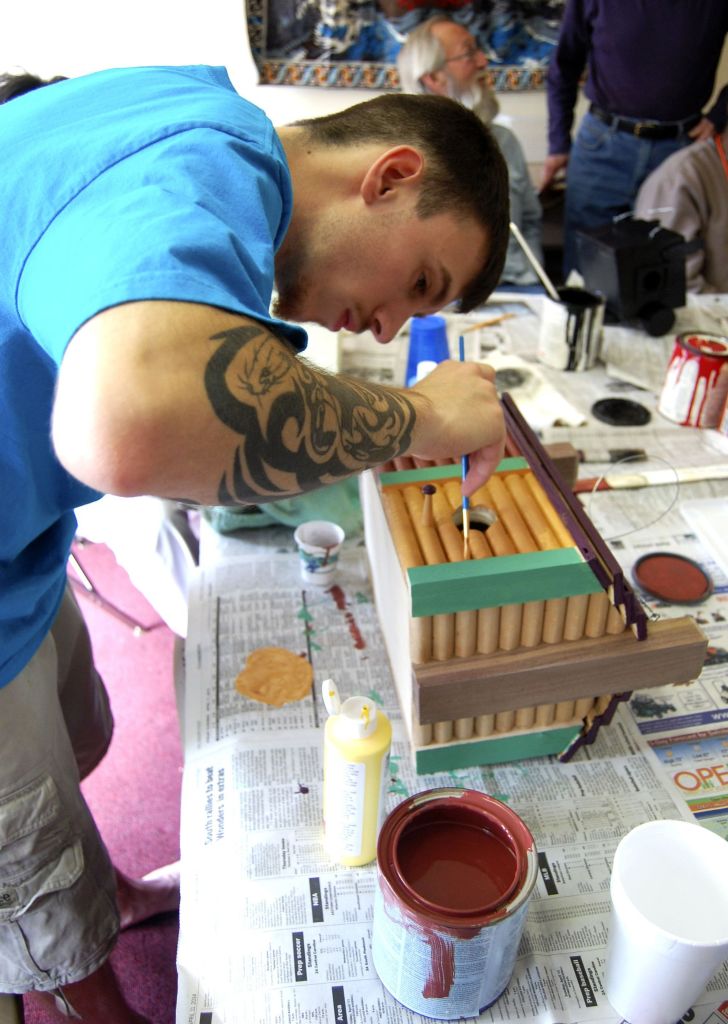 SALISBURY — People who don’t have homes of their own worked for two days this week creating homes for feathered friends in hopes of raising money for the local shelter.
Her brow furrowed in concentration, Leslie Saldivar carefully applied the finishing touches Thursday to a birdhouse that could fetch $100 or more at a fundraiser for Rowan Helping Ministries.
Saldivar and Keith Bynum worked together on the abode, built to look like a little barn. Both homeless, Saldivar and Bynum painted the wooden creation red, white and blue and dubbed it Barn Free.
“It’s fun,” Saldivar said. “I love doing stuff like this. It takes your mind off other things.”
Nine birdhouses painted by members of the RHM New Tomorrows program, which meets at Park Avenue United Methodist Church, will be auctioned off at 6:30 p.m. May 3 at Pass the Plate. Tickets are $50 each, available by calling Kim Taylor at 704-637-6838, extension 101.
Last year, birdhouses painted by New Tomorrows fetched $800 at the silent auction, said volunteer Gail Kimball, who led the two-day workshop to complete the structures.
“I think they will bring top dollar,” Kimball said.
Homeless shelter guests, volunteers and RHM staff worked diligently in a sun-filled classroom at the church. Painting was serious but the conversation was light-hearted as the group laughed about names chosen for various birdhouses: Donation Station, Fill-Er-Up, 3’s Company and even Chateau de Albatross.
The project is a family affair for the Kimballs. Gail’s husband Bob Kimball, as well as their grandsons Andrew Daniels and Shane Robert, helped decorate, and the Kimballs’ son-in-law Brian Howell builds the birdhouses every year.
Howell, who retired from the N.C. Transportation Museum, asks his family for ideas, and they sketch possible designs. Howell then builds the birdhouses, which this year included a gas station, camper and log cabin.
One homeless guest with a background in carpentry commented on the quality of the intricate birdhouse construction. Howell’s designs featured embellishments like wire dragonflies and perches made from drawer handles.
Sheenia Daugherty works as program coordinator for New Tomorrows, and Charlie Taylor is her assistant. Taylor is a member of the RHM Journey Forward program and lives in transitional housing near the shelter.
Whoever paints the birdhouse that commands the highest bid at the auction will earn a cash prize straight from Gail Kimball’s pocket.
“A substantial reward,” she said with a smile. “Enough to go to Taco Bell.”
While many people who go home with birdhouses display the them indoors as works of art, Kimball said the structures are functional. She’s had several birds nest inside the houses she’s won at past auctions.
Proceeds from the sale go toward Rowan Helping Ministries’ operating budget, said Kyna Grubb, executive director.
RHM is preparing to open a new shelter and Jeannie’s Kitchen on May 18.
Pass the Plate will be held at Chris and Renee Bradshaw’s house this year, yet another example of Chris Bradshaw’s service to the organization, Grubb said.
Bradshaw serves as chairman of Shelter Ministries, which owns all RHM property, and spent months voluntarily putting together the 17 parcels of land that the new expansion sits on, across North Long Street from the original shelter.