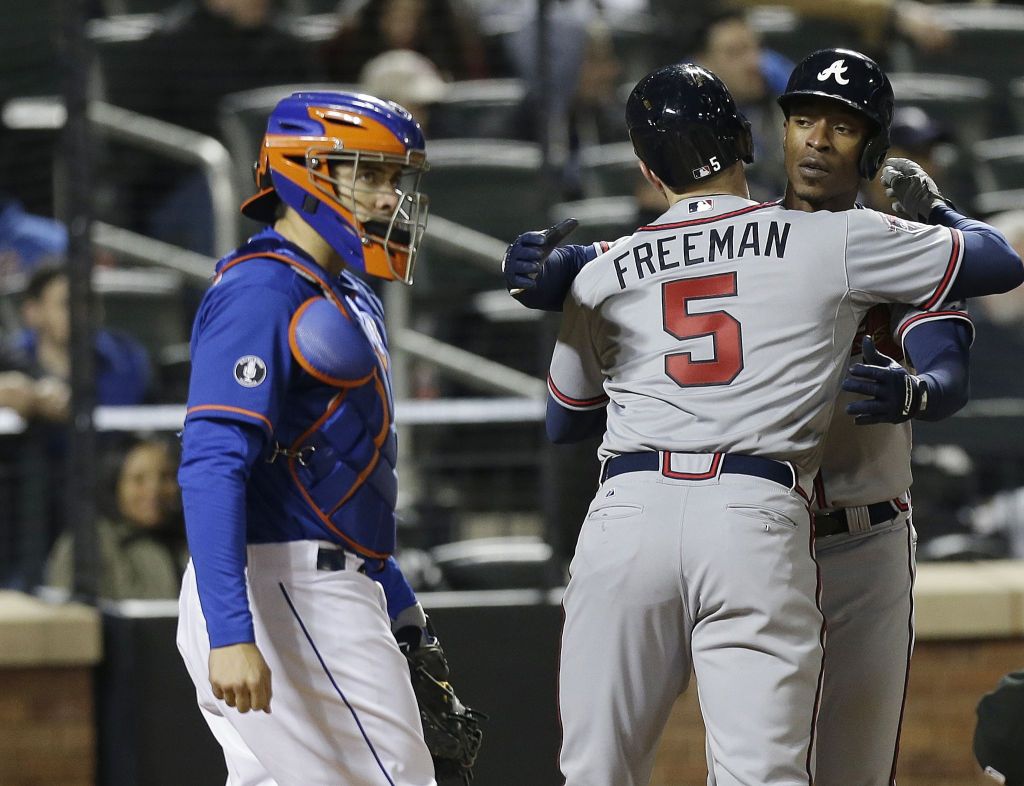 NEW YORK — Aaron Harang knew the score, he’d done this before: No hits, too many tosses.
Harang didn’t allow a hit for seven innings but was pulled after 121 pitches, and reliever Luis Avilan gave up David Wright’s two-out single in the eighth as the Atlanta Braves beat the New York Mets 6-0 Friday night.
“It wasn’t that tough of a decision, really,” Braves manager Fredi Gonzalez said.
As Harang’s pitch count increased on a chilly evening, it seemed doubtful he would go the distance. Harang walked six, including two in the sixth inning and another pair in the seventh.
“I know how it works,” he said.
Sure does.
In 2011, in his first start for San Diego after missing a month because of a foot injury, he pitched no-hit ball for six innings and was taken out after 95 pitches.
Harang retired the first two Mets batters in the seventh, then went to full counts on the next three. He threw 23 pitches in the inning.
“If I’m through eight, I’m going back out,” Harang said.
Harang (3-1) left for a pinch hitter during a long, four-run eighth. He was never in the on-deck circle — the decision had already been made.
Gonzalez had Harang’s health in mind. The 35-year-old righty said he fought his manager, but not much.
“I know it’s probably the hardest decision he’s ever going to have to make,” Harang said. “He reiterated multiple times, ‘Man, I hate doing that.’”
Gonzalez said it wasn’t quite that difficult.
“I want him pitching 27 more times,” Gonzalez said. “If it was the ninth inning, maybe, think about it.”
“It gets to the point you chase that no-hitter, chase that dragon, you’re up to 140 pitches,” he said. “I think we made the right decision.”
Jordan Walden completed the combined one-hitter.
The Mets hit few balls hard against the resurgent Harang, who lowered his ERA to an NL-best 0.70. The closest they came to a hit off him was actually on a check-swing tapper by Travis d’Arnaud in the second inning.
Second baseman Dan Uggla charged, snapped a throw and d’Arnaud was called out. Television replays appeared to show d’Arnaud might’ve been safe with an infield hit, and manager Terry Collins discussed the call with first base umpire Eric Cooper. But Collins didn’t challenge it because Lucas Duda, who had been on first, tried to advance to third and was easily beaten by first baseman Freddie Freeman’s return throw.
“I thought I was safe, but it’s the perfect reason to not challenge something because there was an out at third,” d’Arnaud said. “I know that if you get it right, they give it back to you, but Terry went out, talked to the umpire and then explained the whole situation to me.”
Wright spoiled the combo no-hit bid with a clean single to left field.
The 6-foot-7 Harang took a no-hit try into the seventh inning for the second time this year. He did it in his season debut, giving up a leadoff single in the seventh at Milwaukee. He has never pitched a no-hitter in 13 major league seasons.
Harang struck out five. He fanned pinch hitter Andrew Brown with runners at first and second with his final pitch, protecting a 1-0 lead.
Harang finished up last season with the Mets, then was let go by Cleveland in spring training.
He kept up the Braves’ recent run of stellar pitching. Julio Teheran beat Philadelphia 1-0 on Wednesday and Alex Wood lost to the Phillies 1-0 Thursday.
The Mets had their three-game winning streak snapped. Before the game, they traded slumping first baseman Ike Davis to Pittsburgh and activated outfielder Chris Young from the disabled list.
Freeman hit his fifth homer, a two-run shot in the eighth.
The Braves got a run on a strange sequence that began with a double by Uggla — Justin Upton was thrown out at home on the play, but Uggla headed to third and scored when d’Arnaud threw wildly into left field. Jordan Schafer added an RBI double beyond the reach of right fielder Curtis Granderson.
Chris Johnson hit an RBI double off Jonathon Niese (0-2) in the second for a 1-0 lead.
NOTES: RHP Ervin Santana (1-0, 0.64 ERA) starts for Atlanta on Saturday vs. RHP Bartolo Colon (1-2, 6.00). Colon has been having back trouble, and Collins said Daisuke Matsuzaka needed to be ready in case the problem flares up. … Kent Mercker pitched the Braves’ last no-hitter in 1994.