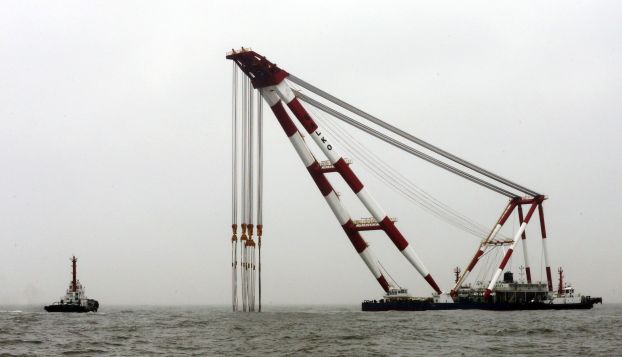 Your daily look at late-breaking news, upcoming events and the stories that will be talked about today:
1. UKRAINIAN MILITIA DENIES CALLS TO FREE BUILDINGS

Pro-Russian insurgents in the east who have been occupying government buildings say they will only leave them if the interim government in Kiev resigns.

Officials say they’re looking at whether the third mate ordered a turn whose degree was so sharp that it caused the ship to list.

3. TRAGEDY ON THE WORLD’S HIGHEST PEAK

An avalanche on Mount Everest kills at least 12 local guides, and three more are missing in the deadliest disaster in the mountain’s history.

It explains how the government will gather the user data of online visitors to WhiteHouse.gov, mobile apps and social media sites. It also clarifies that online comments are in the open domain.

New numbers on "Obamacare" enrollment are encouraging to the president, but still to be announced is how many of those were previously uninsured.

Christians are marking Good Friday with prayers and processions through Jerusalem’s Old City, while Pope Francis joins a torch-lit Via Crucis procession later in the day.

7. HOW THE OFFICER KILLED AFTER BOSTON BOMBINGS IS BEING REMEMBERED

Sean Collier will be honored in a ceremony at MIT, and some 25 friends and family will run the marathon to raise money for a scholarship fund named for him.

8. CHINA SAYS ONE-FIFTH OF ITS FARMLAND IS POLLUTED

The admission by Beijing is a stunning indictment of unfettered industrialization under the Communist Party’s authoritarian rule.

9. NEW DETAILS ABOUT DEATH DURING A LONG 911 CALL

Search warrants say the man accused of killing his wife while she was on the phone with a dispatcher had eaten marijuana-infused candy from one of Denver’s pot dispensaries.