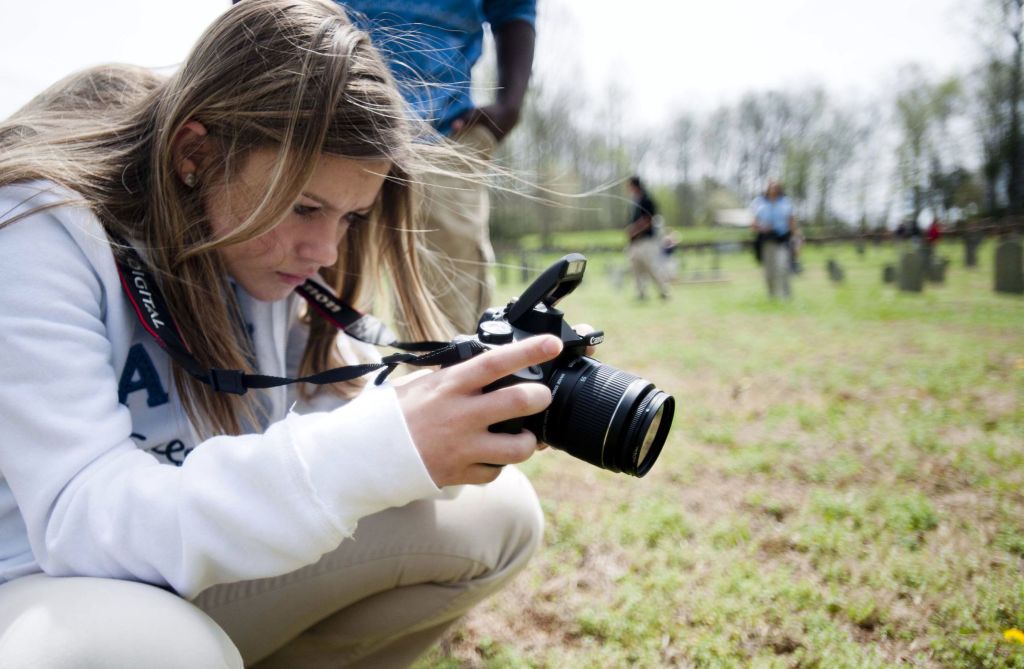 Armed with brand new digital cameras, 18 sixth-, seventh- and eighth-graders explored Thyatira Presbyterian Church and its cemetery Tuesday afternoon.
Jane Current’s enrichment class at West Rowan Middle School received a $5,000 grant from the Rowan Arts Council for photography and videography equipment to tell the stories of Rowan County.
Current said her goal for the class is to have them “weave the stories” of the county’s residents.
Current said her students plan to interview long-time residents and newer residents, including those who have moved from far away countries as well.
Their goal is to “weave these stories of why they came to Rowan County” and look at why people stay in the area as well.
In addition to learning about the heritage of their home, Current also wants her students to get more comfortable talking to people, an art that she says is lost in this age.
“It’s gotten a lot of them to have conversations at home,” she added.
In an attempt to “go from the past to the present,” the class started off their project by visiting Thyatira and Third Creek Presbyterian Church. They explored the cemeteries at both churches and documented what they could about the lives of the earliest citizens of Rowan County.
Led by Thyatira’s sexton, Glenn McCorkle, students set out to document the lives of some of the county’s earliest citizens. They inspected tombstones for different inscriptions, such as lambs or skulls and crossbones and photographed ones they found interesting. They even found the final resting place of several Revolutionary War soldiers.
Current said the students were “having a great time trying to learn this equipment.”
With the grant, they were able to purchase eight digital cameras, a video camera and a 35-millimeter camera. There is still some money left in the budget for developing the photos and creating a way to display their work.
Current said she is “very thankful” for the grant and for the ability to purchase the cameras.
Before the grant, the class only had one camera, but with the extra equipment, they can gather “a lot of different pictures from everyone’s point of view,” said Katie Moss, one of Current’s students.
Moss said her favorite piece of equipment they bought is the video camera.
“I like doing the interviews,” she said.
Current’s class had to compete against other artists and organizations for the grant. The Rowan Arts Council looks for projects that further art, history and education, according to council member Barbara Perry. Knox Middle School was also awarded a grant by the council for an anti-bullying mural.
Council member Shirl Hull said West Rowan’s grant application “really intrigued” the council.
“School should be fun,” Current said, adding that creating a tangible way to access history is the best way to do that.