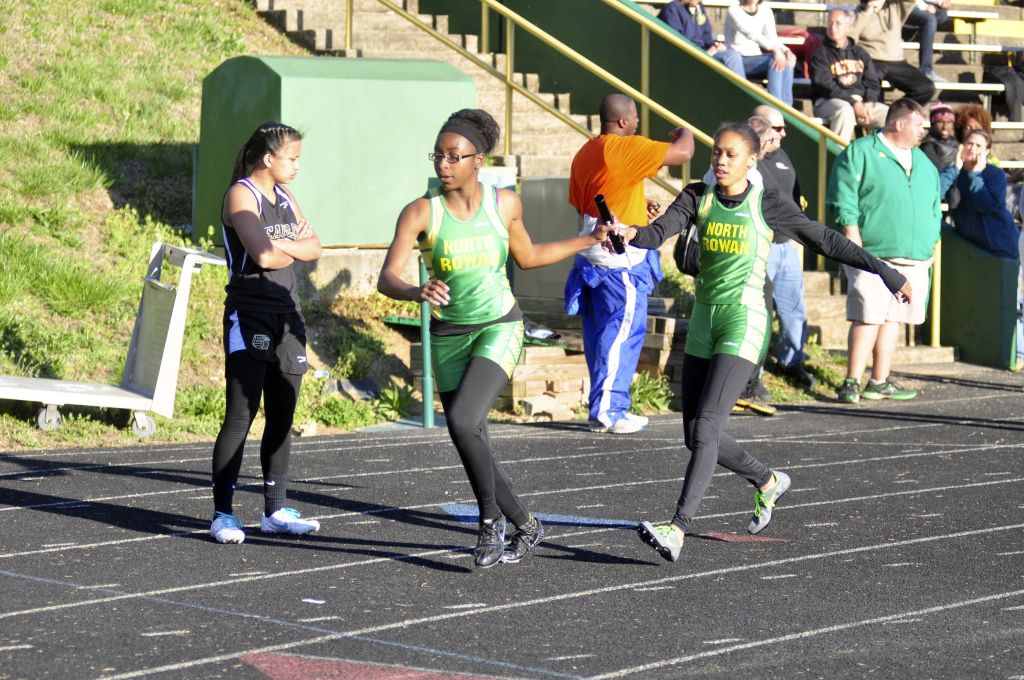 SPENCER — West Davidson’s girls outdistanced the field in the CCC track and field championships —literally.
West Davidson coach Kevin Troy liked his team’s chances of repeating as conference champs, but he had two concerns — his second-best distance runner was out with an injury and perennial track power North Rowan was back in the CCC after a four-year hiatus in 1A.
Troy needn’t have worried. Winning proved as easy as 1-2-3 for the Green Dragons, who were devastating in the distance events. West Davidson runners grabbed the top three places in the 800, 1600 and 3200 and won the 4×800 relay as well. Their dominance in the four distance runs was worth 82 points in a 10-8-6-4-2-1 scoring system, and the Green Dragons finished with 140 points. North placed second with 99. Other scores were Salisbury (86), Thomasville (82), East Davidson (81) and Lexington (30).
WD’s Callie Wynn was a triple winner in the 800, 1600 and 3200 and got lots of help from Patience Hunt, Valerie Vittori and Jasmine Benitez.
“Callie is the face of the program and we love her to death, but she’d be the first to tell you it’s our depth, not one person, that’s allowed us to win championships,” West Davidson coach Kevin Troy said. “Even with a good girl out today we were deep. We have a very good cross country program and a very good indoor track program. Our girls run distance year-round, and if I’m not there, they’ll run on their own. The program has come a long way. Eight years ago, West Davidson had four or five girls, Now we’ve got 34.”
West Davidson’s success wasn’t limited to long runs.
“Going 1-3-4 in the high jump was big,” Troy said. “Our hurdlers did well, and while we’ve only got one sprinter (Mariah Seaford), she picked up some key points.”
North winners included flying freshman Payton Russell in the 400 and Alexis Mitchell in the 100 hurdles,
Mitchell is the daughter of North’s basketball coach Andrew Mitchell, but she says she’s really not much of a hoops person.
“I’m actually kind of clumsy,” Mitchell said with a laugh. “When I first came out for track, I never thought I could do hurdles, but Coach (Robert) Steele convinced me I could. He just kept telling me I could do it, and I’m glad he did. Now I’m hoping to do hurdles in college.”
Steele is retired now, but his presence is still felt everytime North track competes, and the list of championships on the Eagle Stadium scoreboard and on T-shirts is reminder of North’s track legacy.
Salisbury got wins from its two stars — Jaleesa Smoot, who edged Thomasville’s Kameron Skeen in the 100, and Cheyenne Gloster in the discus. Salisbury freshman Breya Philpot edged North’s Janiah Hall for first in the long jump.
Salisbury stayed on top of North a long time in the fight for second, but the Aleeyah Johnakin’s fourth in the triple jump pushed the Cavaliers ahead to stay.
Lexington’s Karrigan Ellison was impressive in pulling away to victory in the 200. East Davidson’s Taylor Moretz won the 300 hurdles. Thomasville’s Miracle Johnson won the triple jump, and Thomasville’s Monique Tuttle nipped Winston-Salem State signee Gloster in the shot put.
“It was a little disappointing because I lost the shot put by 2 inches,” Gloster said. “But I did win the discus, and that’s my main event.”
Gloster placed second in the 2A state meet a year ago and has a good chance to win it all this time. She’s thrown a whopping 142 feet this season, and coming anywhere close to that effort probably would mean gold.
Smoot clocked a relatively slow time — for her, at least — to take the 100, but that was the end of her day, and that hurt the Hornets. Smoot usually is a huge factor in multiple sprint events.
“I strained a muscle,” Smoot explained. “I couldn’t compete afer that.”
Smoot won the 400 in last year’s state meet and has run one of the top 400 times in the state this season. She placed third in the 2013 2A state meet in the 200 and fourth in the 100.
The relays were extra competitive, with Thomasville taking the 4×100, Salisbury winning the 4×200, North rolling in the 4×400 and West Davidson winning the 4×800.
Maybe the best race all day came when Thomasville beat East Davidson by one-hundreth of a second in a dead heat in the 4×100.
But mostly the day belonged to the Green Dragons, who happily mobbed Coach Troy after their victory was officially announced.
“I didn’t have a thing to with this,” Troy said modestly. “It was all the girls.”