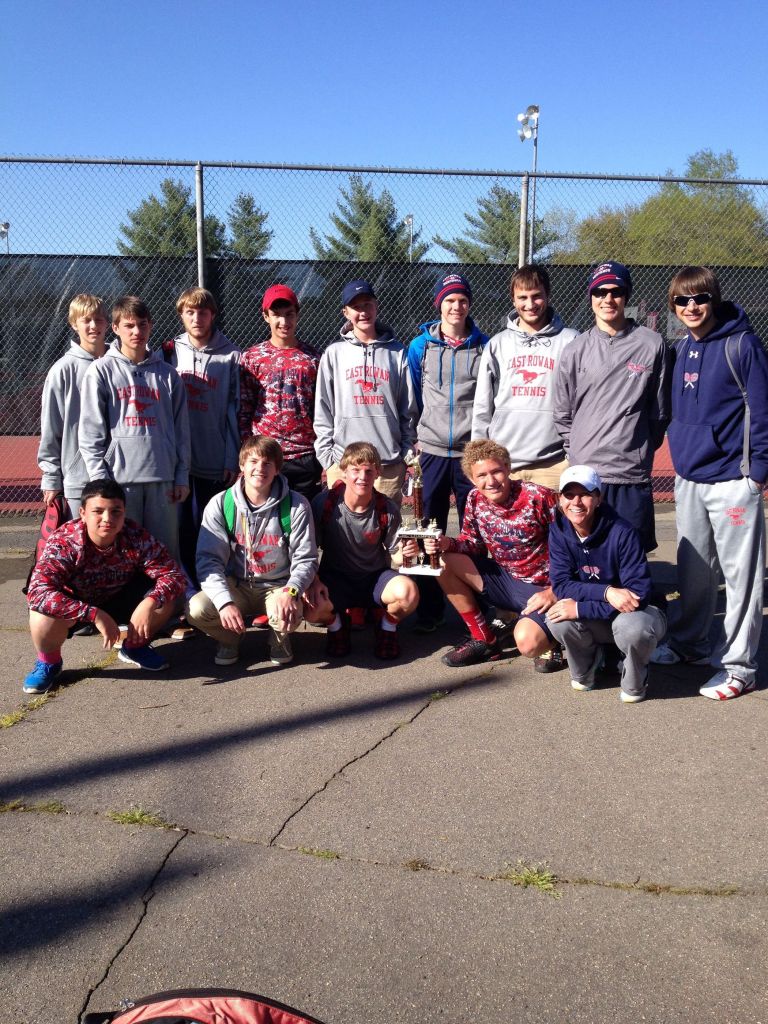 East Rowan’s team of Chance Brown-Ike Emerson won the SPC doubles tournament on Wednedsay at Concord’s Myers Park.
East will have a first-round playoff game at home on April 29 at 4 p.m.
CCC
In the CCC tournament in Lexington, Salisbury’s Michael Ogden beat West Davidson’s Brett Moore 6-3, 6-0 for the singles championship.
Salisbury’s Hunter Carlton won 6-0, 6-0 against West Davidson’s Noel Lopez in the third-place match.
All four qualified for regional play.
• In CCC doubles, Salisbury’s Clint Comadoll-Spencer Storey won 6-3, 6-4 against Salisbury’s Chris Derrick-David Derrick in the final.
East Davidson’s Jake Finlay-Brett Fuller and West Davidson’s Jaime Lopez-Nathan will join the two Salisbury doubles teams in the regional.
Regionals will be held May 2 at Lexington, beginning at 2 pm.
Taylor Martin had four hits as West Rowan won 8-3 against East Rowan in SPC softball on Wednesday.
Down 3-2, West scored six runs in the sixth.
Peyton Geene pitched a complete game and struck out eight for the Falcons.
Greene and Hunter Gibbons had two RBIs each.
Katie Kepley led East with three hits and two RBIs. Schrade Daniel.
• Central Cabarrus held South Rowan to three hits and scored in the seventh to beat the Raiders 3-2 in SPC softball.
South pitcher Logan Lowery struck out six.
Salisbury defeated Lexington 3-1 on Wednesday in CCC soccer.
Salisbury (11-1-1) stayed undefeated in the league. The Hornets are 6-0 in the CCC.
Salisbury overcame a sluggish first half, beginning with an unassisted, well-earned goal by Kate Grant.
The second Hornet goal was scored by Maddie Labovitz and assisted by Shelby Holden.
The final tally started from Maddie Labovitz and was finished by Katie Bullock.
“We’re banged up unlike any other team I have coached,” Salisbury coach Matt Parrish said. “ We were without eight players tonight and lost another with less than five minutes left in the match. Between those that started spring break a little early and those that can’t walk, we really struggled to find balance and rhythm tonight. Girls were playing in unfamiliar positions with seemingly unanticipated expectations.”
Parrish credited a bit of “positive encouragement” at halftime producing better second-half results.
“We came out with more passion and heart. I was proud of the girls for taking the ‘positive encouragement’ and translating it to heightened performance on the field. We hit the woodwork no less than seven times and continued to fight and eventually persevered.”
Next up is Thomasville away on Monday, April 28.
East Rowan will hold a six-team Easter tournament on April 24-26. It’s a round robin format with pairings already set. East will play West Iredell on Thursday, the 24th, at 4 p.m. East will play North Iredell on the 25th at 4 p.m. and will take on Mooresville on the 26th at 7 p.m.
West Rowan also is participating. The Falcons play North Iredell at 7 on the 24th, Mooresville at 7 on the 25th, and West Iredell on the 26th at 4 p.m.
Uwharrie Charter also is in the event and will play in the 1 p.m. game each day.
• The annual F&M Bank High School Baseball Classic returns to CMC-NorthEast Stadium on April 23-25.
The eight-team tournament will crown a champion. The field includes South Rowan, Carson, North Rowan, Salisbury, A.L. Brown, Northwest Cabarrus, Mount Pleasant and Robinson.
First-round and winner’s bracket games will be played at CMC-NorthEast Stadium. Consolation games will be played at A.L. Brown.
Tickets are $6 for adults, $5 for students and seniors, and children 3 and under will be admitted free.
See Scoreboard for pairings.
• Salisbury lost 6-1 to West Davidson in CCC baseball on Wednesday.
Chandler Simerson was the winning pitcher. He struck out 10 Hornets.
• Michael Pinkston had three hits by West Rowan lost to Cox Mill 8-2 in SPC action on Wednesday.
Juan Garcia had two hits for the Falcons.
Michael Ball took the loss. He pitched five innings, and Nick Collins finished up.
Julian Smith pitched a gem for Cox Mill. Justin Sponseller knocked in two runs.
• Concord won 8-1 against Northwest Cabarrus on Wednesday afternoon.
• South Rowan-Robinson was canceled.

Catawba’s women are the No. 4 seed in the SAC tournament and will play top-seeded Queens at 4 p.m. Friday at Queens in a semifinal.