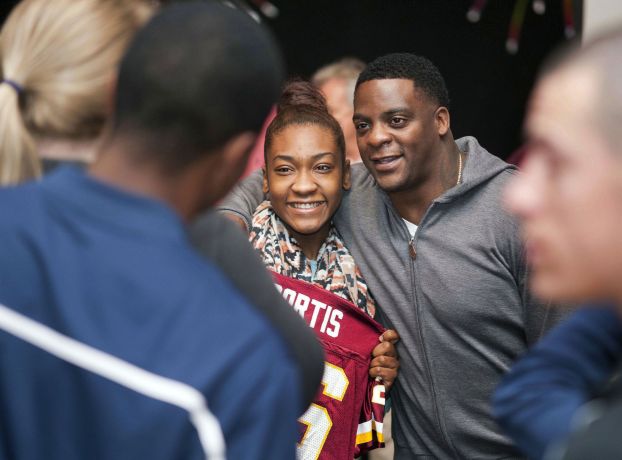 GRANITE QUARRY ­­— Clinton Portis retired from the NFL in 2012 but he’s got plenty of good years left.
He’s 32 now, but not that far removed from the 17- and 18-year olds he was talking to at East Rowan High School on Wednesday afternoon. Sports can keep you young, but it can age your body in a hurry, especially if you’re a running back. If there’s a lesson to be taught from retiring at 29, it’s that opportunities don’t come around often and don’t last forever. Portis maximized his talents and tried to relay that to the students in an assembly.
Granite Quarry is probably as far away as you can get from Miami culturally, but Portis entered East in a nondescript gray hooded sweatshirt looking like another Rowan County resident and not a record-breaking football star.
“I wouldn’t say it was cut short,” Portis said of his playing days. “I played long enough. I think nine years in the NFL was great. My time was up. Injuries are a part of the game. It’s a violent game and I played it to the best of my abilities.”
His time in college was awesome too. Portis was part of the 2001 Miami team that won the national championship and had an unreal legacy with NFL players like Jeremy Shockey, Ed Reed, Andre Johnson, Willis McGahee and Vince Wilfork. The Hurricanes rolled Nebraska 37-14 in the national title game, giving the ‘Canes their fifth championship in 18 years.
“It was unbelievable,” said Portis, who was inducted into the Miami Hall of Fame last week. “Who’d ever thought looking back 10 years later that there’d be so many successful guys from that team.”
Portis headlined a three-school tour Wednesday that was part of a “Game Plan For Life” program that was sponsored by the Rowan-Kannapolis ABC Board and Joe Gibbs Racing. Former NFL players Steve Israel, Renaldo Wynn and NASCAR driver Darrell Wallace also spoke at length about the dangers of drug and alcohol abuse.
Israel, now a wealth management advisor at Fifth Third Bank, told the crowd that when you invest in something, you see a bigger return. Setting goals was emphasized and Israel revealed his goals as a youth of playing football for Pittsburgh, obtaining an economics degree and dating the prettiest girl on campus.
Portis likened his life to always being fourth or fifth on the depth chart and overcoming challenges to become No. 1. As a small-town kid from Mississippi, Portis avoided drugs and alcohol and stayed out of trouble despite his brother, Gary Hampton, falling in with the wrong crowd and later serving time in prison.
After leaving the game at 29, he’s seeking fulfillment in contributing to the community.
The former Denver Broncos and Washington Redskins ball carrier works with ACC Network as a college football analyst.
Portis gave away autographed footballs to Sam Wyrick and Darin Basso and Amani Ajayi received a signed jersey.
“The opportunity to speak to today’s youth is an easy opportunity to be involved in,” Portis said. “I think kids think that they go through. I tell them it’s a recycled period. They go through the same thing I went through.”

Your daily look at late-breaking news, upcoming events and the stories that will be talked about today: 1. NEARLY 300... read more