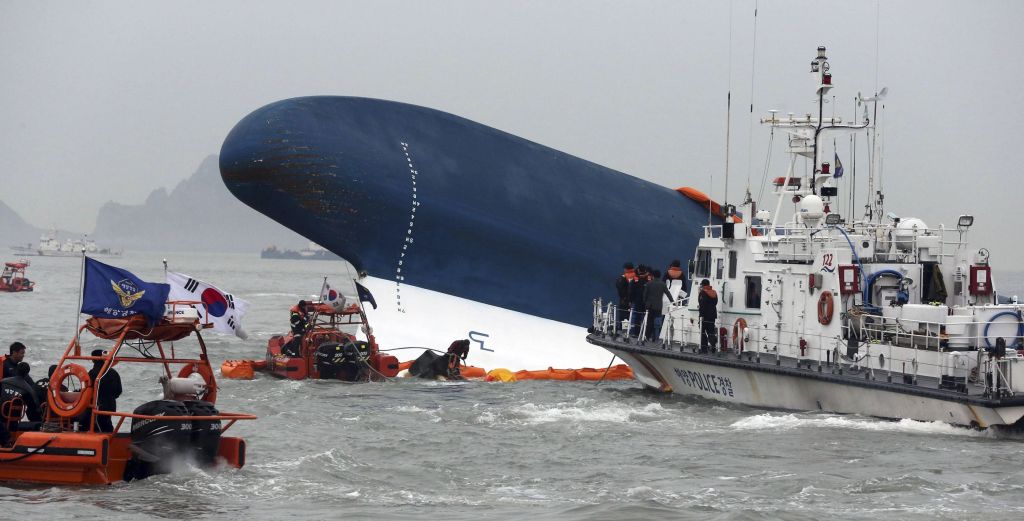 MOKPO, South Korea (AP) — Strong currents and bad visibility hampered rescuers today in the search for 287 passengers still missing more than 24 hours after their ferry flipped onto its side and filled with cold water off the southern coast of South Korea, causing fury among families waiting for word of passengers who were mostly high school students.
Nine were confirmed dead, but many expect that number will rise sharply because the missing have now spent more than a day either trapped in the ferry or in the cold seawater.
There were 475 people aboard and frantic parents have gathered at the high school student’s school near Seoul and in Mokpo, in the south of the country, not far from where the ferry slipped beneath the surface until only the blue-tipped, forward edge of the keel was visible.
Parents, siblings and other relatives of three high school students killed in the sinking wailed and sobbed as ambulances at a hospital in Mokpo took the students’ bodies to the city near Seoul where their high school is located. The families, who spent a mostly sleepless night at the hospital, followed the ambulances in their own cars.
The family of one of the victims, 24-year-old teacher Choi Hye-jung, spoke about a young woman who loved to boast of how her students would come to her office and give her hugs. She loved teaching and loved her students and was excited about her first-ever school trip to Jeju island. There were 325 students on board, headed to Jeju for a four-day trip.
“She was very active and wanted to be a good leader,” her father, Choi Jae-kyu, 53, said at Mokpo Jung-Ang Hospital while waiting for the arrival of his daughter’s body. Choi’s mother, sitting on a bench at the hospital, sobbed quietly with her head bent down on her knee.
Meanwhile, 20 divers tried to get inside the ship’s wreckage but couldn’t because of the current, the coast guard said. More than 400 rescuers searched nearby waters overnight and into this morning.
The coast guard said it found two more bodies in the sea Thursday morning, pushing the death toll to nine. The two were believed to be men in their 30s and 20s but authorities are trying to confirm their identity, said an official from the coast guard’s press team who would not give her name because she did not have permission to speak to the media.
Dozens were injured. Coast guard officials put the number of survivors early Thursday at 179.
It was still unknown why the ferry sank, but coast guard officials were interviewing the captain and crew. The Sewol, a 480-foot vessel that can hold more than 900 people, set sail Tuesday from Incheon, in northwestern South Korea, on an overnight, 14-hour journey to the tourist island of Jeju.
The ferry was three hours from its destination when it sent a distress call after it began listing to one side, according to the Ministry of Security and Public Administration.
Passenger Kim Seong-mok told broadcaster YTN that after having breakfast, he felt the ferry tilt and then heard it crash into something. He said he was certain that many people were trapped inside the ferry as water rushed in and the severe tilt of the vessel kept them from reaching the exits.
Koo Bon-hee, 36, told The Associated Press that many people were trapped inside by windows that were too hard to break.
“The rescue wasn’t done well. We were wearing life jackets. We had time,” Koo, who was on a business trip to Jeju with a co-worker, said from a hospital bed in Mokpo where he was treated for minor injuries. “If people had jumped into the water … they could have been rescued. But we were told not to go out.”
Oh Yong-seok, a 58-year-old crew member who escaped with about a dozen others, including the captain, told AP that rescue efforts were hampered by the ferry’s severe tilt. “We couldn’t even move one step. The slope was too big,” Oh said.
The Sewol’s wreckage is in waters a little north of Byeongpung Island, which is not far from the mainland and about 290 miles from Seoul.
“We cannot give up,” said South Korean President Park Geun-hye, after a briefing in Seoul. “We have to do our best to rescue even one passenger.”
White House spokesman Jay Carney said the U.S. and its 7th Fleet stood ready to assist, including the USS Bonhomme Richard, which was in the region.
The last major ferry disaster in South Korea was in 1993, when 292 people were killed.
TV stations broadcast live pictures Wednesday of the listing Sewol as passengers clambered over the side, jumped into the sea or were hoisted up by helicopters. At least 87 vessels and 18 aircraft swarmed around the stricken ferry.
The water temperature in the area was about 54 degrees Fahrenheit, cold enough to cause signs of hypothermia after about 11/2 hours of exposure, according to an emergency official who spoke on condition of anonymity because department rules did not allow talking to the media. Officials said the ocean was 121 feet deep in the area.
The survivors — wet, stunned and many without shoes — were brought to nearby Jindo Island, where medical teams wrapped them in pink blankets and checked for injuries before taking them to a cavernous gymnasium.