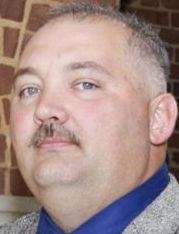 John Brindle is going head-to-head with Rowan County Register of Deeds Harry Welch in the Republican primary to try and take back the seat he commanded four years ago.

Brindle, 42, is a detective with the Rowan County Sheriff’s Office, and said the register of deeds office is in need of new leadership.

Welch, 66, is running for his second term and said he has saved the taxpayers “thousands of dollars” by simply ending contracts he said his predecessor and Brindle previously had paid.

Having earned an advanced register of deeds certification from UNC-Chapel Hill as well as serving in the office before, Brindle said he has a working knowledge of the office and the requirements to keep the records backed up and secure as they are recorded.

“(I have) dedication and time spent in the office, meaning being available to the citizens during office hours and during emergencies on the weekend,” Brindle said. “As the register of deeds from 2008 to 2010, I was able to make many cost-saving changes to the office.”

In addition to replacing a computer system that was installed in 1984 with an efficient system without using tax dollars, Brindle said he removed more than 55,000 Social Security numbers from the records to protect them from fraudulent use.

Welch said he also has implemented cost-saving measures in the office.

“I simply ended contracts that my predecessor and (Brindle) previously had paid. These services were actually free from the N.C. General Assembly,” Welch said. “I instituted a secure online vital request system – making a simple, secure system for obtaining these records for the public.”

With 40 years of successful business management, Welch said he operates the register of deeds office like a private enterprise through emphasizing customer service as well as ensuring the office is profitable.

“Regular visitors such as attorneys, PAs and others note my staff’s friendly, courteous and professional services,” Welch said. “I was the first register of deeds to sign a class action lawsuit against Fannie Mae and Freddie Mac. These two organizations claimed federal protection to avoid paying excise tax in North Carolina, but they also deny any federal mandates when paying their executives hundreds of millions of taxpayers’ dollars in bonuses.”

Brindle said Rowan County citizens should receive nothing less than a leader who gives their time and attention to the day-to-day needs of the office.

Since the 2010 last election, Brindle has changed his party affiliation from Democrat to Republican.

He said he did so while he was working for former Rowan County Register of Deeds Bobbie Earnhardt.

“The term was from 2008 to 2010, and I was trusted to fill the term by the Democratic Party. I changed to support Sheriff Kevin Auten who hired me full-time at the (Rowan County) Sheriff’s Office in 2010. For me, it has never been about politics, but rather providing an unbiased service to all users of this office.”

As a “lifelong Republican,” Welch said he would not challenge an incumbent, especially “one who is saving the citizens money.”

In his first six months in office, Welch said he cut the register of deeds annual budget by more than 10 percent.

“Customer service improved, and no employees’ salaries were cut,” Welch said. “The Rowan County Register of Deeds office has records going back to 1753. As one can imagine, some of our older books need special TLC. Many of these older books need to be refinished. After inquiring with other registers, (I found) the process that they all are using entails having the books shipped out of state, the pages cut out, copied and reattached into a new binder.”

“I asked and got help from Jeff Hall, the director of the Rowan County libraries. Our older books are hand-carried to the Rowan County Public Library where they use a state-of-the-art satellite scanner to copy the books and put them online for public access,” Welch said.

The scanner doesn’t damage the books, Welch said, and the effort saved taxpayers more than $27,000 on the first restoration job’s bid.

Brindle said new software allows the instant return of a recorded document, and this measure saves thousands of dollars in postage every year.

“Scan projects being handled by the staff instead of outsourcing to the public sector. This project preserves aging documents to digital images to prevent less handling, keeping these records for our future users to view and enjoy. This project alone is saving hundreds of dollars daily and keeps the records in the office,” Brindle said. “I would continue these projects to include the indexing records to provide more researchers availability to the records thus limiting the handling of these delicate instruments.”

Mitchell and Warren go head-to-head at Catawba College for…