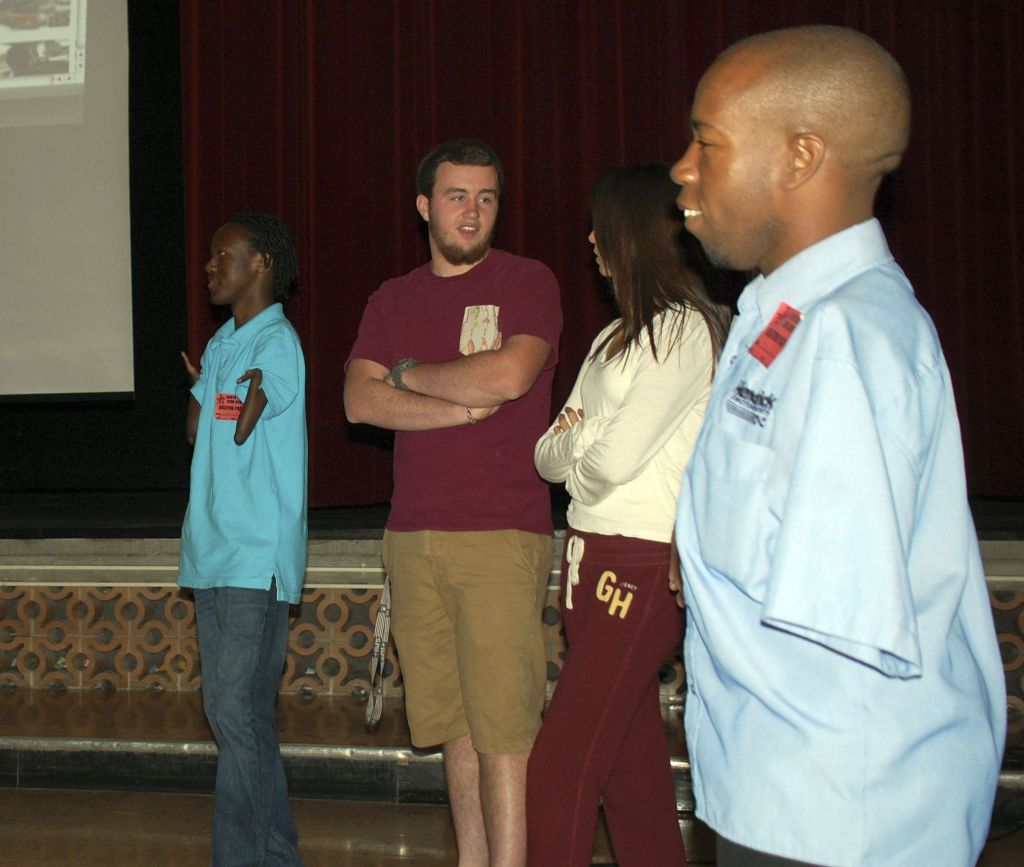 LANDIS — Don’t feel sorry for Richie Parker. That’s a mistake.
Instead feel sorry that you ever took things such as getting dressed, eating cereal, opening a door, typing a letter or driving a car for granted.
Parker, 30, does all those things without arms and has most of his life, never giving in to a non-genetic birth defect. From the day he came home from the hospital, Richie and his parents found ways to accomplish the everyday things — he just had to do them a different way.
Parker became an honor student, a graduate in engineering from Clemson University and, for the past nine years, a chassis and body component designer for Hendrick Motorsports, one of the top teams in NASCAR.
Parker drove his 1964 Chevy Impala SS to South Rowan High School Tuesday morning to take part in a “Game Plan for Life” program, sponsored by Joe Gibbs Racing and the Rowan/Kannapolis Alcoholic Beverage Control.
The general message to South Rowan seniors from former National Football League players such as Perry Tuttle and Renaldo Wynn was make good decisions, especially about alcohol.
The message from Parker focused more on perseverance. All through his life Parker has been asked outright — or people’s eyes have posed the question — how did he deal with the obstacles presented in having no arms?
And over every phase of his life, people made assumptions or bluntly told Parker he would never ride a bike, drive a car, attend college or live on his own.
You either embrace the challenges and find a way, Parker said, or you let the obstacles get the best of you. His advice to the South Rowan kids was simple: Set goals, have a plan to meet those goals and find the motivation.
Parker says all of these things matter-of-factly. He’s a driven man.
ggg
Parker gained national attention last summer when ESPN featured him and his work for Hendrick Motorsports. On graduating from Clemson, Parker took a 10-month internship with Hendrick, the company behind drivers Jimmy Johnson, Jeff Gordon and Dale Earnhardt Jr.
He was hired full-time after the internship was over.
Parker performs his design work on a computer, but the keyboard and mouse rest on the floor. His bare, calloused feet move the curser and handle the typing.
He also drives with his feet, which steer by using a specially designed wheel on the floorboard. He opens the Impala’s driver’s side door with his chin and snaps the seat belt with his mouth. Parker’s foot turns the ignition key, and his head pushes the middle console lever into “drive.”
Over the years, Parker and his family devised certain tools to help him do things on his own, such as open doors and eat his food with utensils. In college, playing with his feet, Parker gained a reputation as one of the better gamers in Madden Football.
ggg
Parker grew up in the coastal town of Beaufort, S.C. From the beginning, his parents, Tracy and Lottie Parker, tried to find techniques and tools to give Richie the chance to do things on his own. Parker said his parents otherwise did their best not to treat him differently from anyone else.
As a youngster, Richie was drawn to his father’s interest in classic cars. Tracy Parker’s everyday car was a 1957 Chevy. By the time he was a teenager, Richie wanted to own and drive an older car as well, and he has now had the Impala for 16 years.
Elijah Clark, a sophomore at Alexander Central High, drove the hour with his mother, Alishia Clark, to hear Parker’s presentation Tuesday.
Clark also has a birth defect affecting the full use of his arms — an anomaly that has been documented in only seven other people in the world, his mother said.
But it hasn’t stopped Elijah from driving on his learner’s permit, being an A-B honor student and gaining statewide recognition for his play on the soccer field.
Not unlike Parker, Clark is pretty adept at video games.
Parker hopes he can be a positive influence on other people, but public-speaking, he acknowledged, takes him out of his comfort zone.
Plus, other guys at Hendrick Motorsports work hard, and he doesn’t think he should be singled out.
What does the future hold for Parker?
“I look forward to what God has in store,” he said.