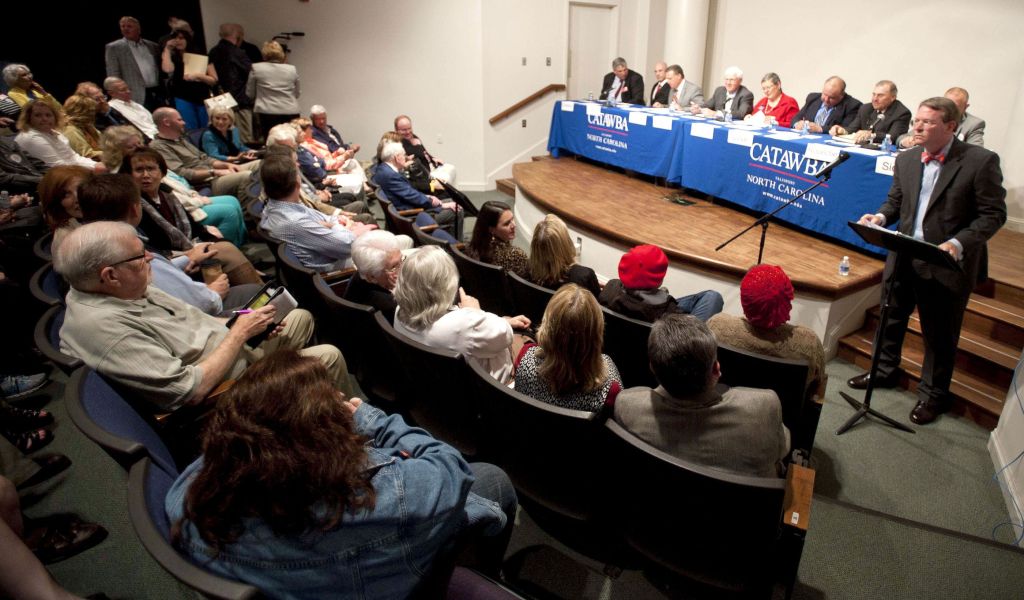 Questions about jobs, schools and the county’s purchase of the former Salisbury Mall drew out the differences Tuesday night among the eight Republicans hoping to win a seat on the Rowan County Board of Commissioners.

The candidates faced a standing-room-only crowd in Catawba College’s Tom Smith Auditorium at a forum sponsored by the Salisbury Post, the Rowan County Chamber of Commerce and Catawba.

As the event’s moderator, Dr. Michael Bitzer of Catawba College hit the candidates with a series of questions, and the diverse answers mirrored the personalities of the people who gave them.

“We are centrally located in the middle of 3.4 million people. That is an ideal reason to be here. That same reason is one of the things I believe is a good way to grow our economy in Rowan,” candidate Joe Coladarci said. “I am a Republican and a Tea Party candidate. The Tea Party is not a political group, but it has the same fundamental ideas and values as our Republican Party does.”

Candidate Brandon Cupp, owner of Cerberus Firearms, said he and his family live in a “beautiful county with many treasures.”

To achieve prosperity, Cupp said Rowan County needs to focus on education, employment for the workforce and utilizing the assets the county has been afforded.

“It is within our grasp with the right leadership, using the skills and things we learned and know to be right in our daily lives,” Cupp said.

Edds advocated developing a countywide jobs and economic improvement plan and relentlessly pursuing the jobs the county can best compete for.

“Let’s begin to act like adults and direct our energies toward turning this economy around,” Edds said.

A Rowan County resident since 1957, candidate Jim Greene is on his second term with the Rowan County Economic Development Commission.

“It’s been a great education and very enjoyable. I have taken great ideas on how to bring jobs to Rowan County,” Greene said. “I have a way of bringing in jobs in through private money to incentivize new building in Rowan County.”

Former Wisconsin lawmaker Judy Klusman said she is running because it is time for new leadership — experienced leadership. Klusman said the county needs to have leaders who are willing to cooperate, collaborate and communicate.

“When you look at the statistics for our children in grade school, and you have 26 percent of them living in poverty — that, my friends, is unconscionable,” Klusman said.

“If Rowan County and local government and other municipalities worked together, it would take some of the tax burden off of everybody. Let’s sit down and work out the problems we have,” Love said. “We elect those people on the school board to educate and run that. Therefore, the only thing the county needs to do is fund what we can afford and let them do their job and educate our children.”

“I’m a designer of ideas. I embrace risk-taking and I’m confident in my decision-making skills when making these decisions to move things forward,” Roueche said. “County government needs a leader who supports communication with in-touch ideas.”

Government should work with corporations in cooperation as opposed to confrontation, Roueche said.

Rowan County Board of Commissioners Chairman Jim Sides, looking to retain his seat, said he doesn’t believe anybody had a problem with him being a Christian until he was elected a commissioner.

“I believe with all my heart I’m right where God wants me to be, doing what God wants me to do,” Sides said. “I do not believe there has ever been a Rowan County commissioner who held his position in more awe and respect and reverence than I do. I live and breathe this job day in and day out.”

Sides said if his past record as a Christian, member of the Republican Party, Tea Party or Rowan County Board of Commissioners offends a person, he or she “is free to join the ranks of ‘la resistance.’”

When Bitzer asked the candidates what they thought of Dr. Lynn Moody’s proposal to transform Rowan education from age 3 through high school, starting with Knox Middle School, nearly every candidate had praise for the new Rowan-Salisbury superintendent.

Edds compared Moody to a first-round draft pick and said he’d like to hear ideas for such bold, sweeping changes that the community would say, “We can’t do that.” That’s the way to be transformative, he said, and the community should get in behind Moody. Teachers should know they have a partner in the county commission, he said.

Coladarci called Moody a “bright light,” but said he was a little surprised she wanted to take the effort all the way down to age 3. He said commissioners are criticized for being intractable when it’s actually the school board that’s intractable and needs new leadership.

Though Bitzer divided the candidates into groups of four to receive different questions, they all addressed the county’s recent purchase of Salisbury Mall in some way.

Roueche said the purchase was a questionable solution to county building needs, and he was not in favor of raising taxes to upfit the mall for county offices.

Sides defended the purchase, saying there was not time to put the $3.425 million purchase on a ballot for voters to approve. Commissioners spent millions on space for a satellite jail, Social Services and 911 operations without putting any of those projects on a ballot, he said.

Commissioners were “forced by the school system” to buy used buildings, Sides said, and in five years today’s naysayers will say the mall was the best idea ever.

Klusman said the county paid about $2 million too much for the mall and would have to develop a strategic plan — after construction and engineer firms inspect the structure and address possible asbestos issues.

Love said the county should not be in the real estate business or a landlord for retail business. The mall was expensive and its upkeep will be expensive, he said. Building new offices would have been cheaper, Love said.

Edds said the mall had become a political and emotional issue after a commissioner publicly and negatively talked about moving county offices and emptying out downtown Salisbury. “I will not allow that to happen,” he said.

In the end, the mall could be a good thing, Edds said. “It’s up to us as leaders to make sure it’s done right.”

Greene said he probably would not have voted to buy the mall, but now the county has to make it an asset. He would not pull jobs out of downtown just to fill the mall, he said.

Coladarci said people use innuendo and “straw dogs” to stir opposition to the mall, and mentioned Klusman’s reference to asbestos as an example. The school office could go into just part of the former Belk’s space and save the school system millions, he said.

Cupp said he was still torn about the mall purchase but thought the structure would make a nice convention center.

When Bitzer asked what Rowan’s business reputation was and how candidates would seek to attract new jobs, Sides opted not to answer the question. Instead, he shared statistics about county revenues and expenditures, emphasizing that Rowan is 68th in its ability to fund schools and 34th in actual school funding, according to one report.

Other candidates talked about the need to be business friendly and positive. “Roll out the red carpet,” was a phrase Klusman used. Love advocated establishing a one-stop shop for developers to deal with the county. Rouche talked about improving Rowan’s image.

In discussing tools to court and cultivate jobs, Greene said he had a plan to get private funding for a spec building. Coladarci said Rowan was perfectly situated to attract distribution centers. Cupp said Rowan should study what has made Mooresville and Statesville so successful. Edds spelled out several points, including the need for a countywide strategy for job growth.

The forum will be broadcast in its entirety on Time Warner channel 16 in Salisbury and 22 in Kannapolis in the coming days.