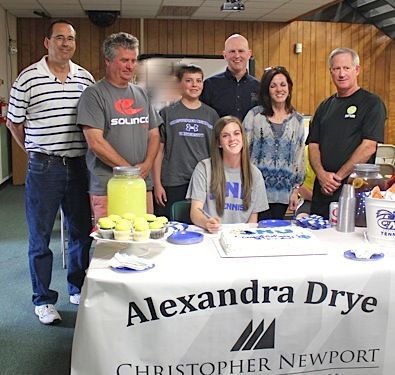 SALISBURY — Salisbury’s Alexandra Drye, a player you’ve definitely heard of if you follow tennis, is going to a school you probably haven’t heard of — Christopher Newport in Newport News, Va.
It’s always a good idea to pick the school that fits you best, not the biggest school that wants you, and that makes Drye’s decision a smart one.
“I think she agonized over this a long time,” SHS tennis coach Scott Maddox said. “But it came down to where she felt the most comfortable. Christopher Newport is a place where she can not only go play tennis, she can do what she wants to do academically as well.”
Drye bleeds tennis and excels at it. The last four years have proven that. But her choosing Christopher Newport is mostly about life after competitive tennis.
“I really like the tennis coach at Christopher Newport, but academics always come first, and the President’s Leadership program there was the biggest factor in my decision,” Drye said.
Drye will probably major in business with a minor in Spanish, but that’s not set in stone yet.
What is set in stone is Drye’s legacy as far as Central Carolina Conference tennis.
Salisbury tennis has been nothing short of amazing, a true dynasty, and Drye has been part of four straight state championships for a program that has taken six straight crowns in 2A and seven of the last eight.
Drye led the Hornets to their 11th straight CCC title last fall, and they’ve claimed league championships 16 of the last 17 seasons.
A three-time all-county player, Drye not only is the reigning Rowan County Player of the Year, she extended a long line of Salisbury CCC players of the year. Hornets Susie Wear, Hannah Lebowitz (three times), Joy Loeblein (twice), Katelyn Storey and Drye have accounted for the last eight CCC Player of the Year awards.
Drye capped her career with the individual state doubles title that she won with teammate Madeline Hoskins. That was the fourth state doubles championship for Salisbury tennis in a seven-year span.
“Winning that championship with such a good friend was a perfect way to leave high school tennis,” Drye said. “We always had great teams here. Our depth is why we won those state championships, not any one person.”
Drye isn’t big or powerful, but she’s gifted with athletic genes on both sides of her family.
People who were around in the 1950s will remember her late grandfather — China Grove’s Carl Drye. He was a marvel, a large but nimble man who doubled as a football lineman and baseball second baseman at Duke.
Alexandra’s father John was an all-county fullback at South Rowan in 1981. He jokes that all-world halfback Michael Ramseur made him look better than he was, but Drye was a fine player in his own right.
When she was an eighth-grader at Salisbury Academy, Drye figured her contribution to Salisbury athletics would be on the volleyball court. She changed direction literally at the last minute.
“I had friends who were going to play tennis, and they convinced me right before tryouts,” Drye said.
By the middle of her freshman year, it was clear Drye had tennis talent. By her sophomore year, she was a key cog keeping that perpetual victory-machine humming.
“I fell in love with the sport quickly,” Drye said. “I started to see I had a chance to play in college, and I tried to put in as much time and work as I could to improve.”
She’s had good coaches. Her first tennis coach Jack Thompson is known statewide. Salisbury coaches Chris Myers and Maddox played their roles. Randy Pate, who operates a tennis academy in Winston-Salem is her current coach as she prepares for college tennis. She doesn’t take a lot of time off.
“She’s a perfectionist who is never satisfied and she’s mostly a self-made player,” Maddox said. “Every good program has a very strong No. 1 player, so she’s been up against a number of ranked players this year. She’s embraced her role and has been excited about it.”
The Tennis Recruiting Network ranks Drye 21st in North Carolina, 149th in the Southeast and 481st nationally in the Class of 2014, which is pretty impressive for a girls who’s tennis game is still relatively young.
She’ll take her talent now to a 5,000-student, academics-first school in the Virginia Tidewater. The Christopher Newport Captains are named, logically enough, after Captain Christopher Newport, a seaman who carried those first English settlers to Jamestown 407 years ago.
“She’ll do great in school and in tennis,” Maddox said. “Alexandra’s best is yet to come.”