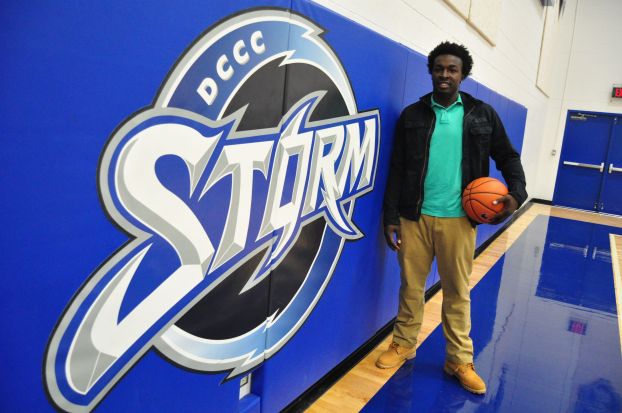 LEXINGTON ­­— If you’ve seen the box scores for the Davidson County Community College men’s basketball team, you know their appeal.
The Storm gives you fits on the defensive end, not unlike the North Rowan teams Oshon West played on. Last year DCCC, a National Junior College Athletic Association Division III school, was second in the nation in scoring and eclipsed 100 points 16 times.
West, the Rowan County Player of the Year in 2013, will play for DCCC next year, a decision he made final on Tuesday. He played at another junior college, Louisburg, last season where he averaged 5.8 points a game. In the second game of the year against Mt. Zion Academy, West was at his best, scoring 18 points and grabbing 10 rebounds. He wasn’t as vital to that team as he was at North, but the level-headed West has kept an even keel and is ready to contribute to one of the more established junior college programs in the region.
“We’re ecstatic to have Oshon as part of our basketball family,” DCCC coach Matt Ridge said. “We feel like he’s humble and I feel like that’s the most important quality he possesses. Obviously, he’s talented, but he’s eager to work and be coached.”
DCCC is 109-9 at home in the past seven years with fans spilling out the exits at some games to catch a glimpse. The Storm posted a 22-5 mark while claiming a regular season co-championship in the Tarheel conference last year.
After a year where it averaged 104 points a game, DCCC is a fun program to be a part of on game nights, but Ridge is quick to point out that offensive efficiency doesn’t happen overnight.
“Practices aren’t as much fun because they’re intense, competitive and demanding,” Ridge said. “ We do pride ourselves in being the best-conditioned team.”
Just about anybody on the roster can score and West is no different. He’s still a threat to hit jumpers as well as drive toward the basket and post up with his 6-foot-3, 215-pound frame.
“I want to go the JUCO route one more year and try go Division I or Division II school,” West said. “This is a good place to do that.”
West is closer to home now, which means more chances to play with old friends at North like Michael Connor and Michael Bowman, who will make their college decisions soon. West watched his teammates play for the state 2A championship in Raleigh last month a year after helping North to a 27-4 record. West scored 1,390 points in his prep career between three years in Spencer and a sophomore season pit stop at North Hills Christian. He wasn’t part of North’s 2011 state title team but was the leading scorer his senior year and helped the Cavaliers make the regional.
After West asked for a release from Louisburg, he contacted Ridge, who was delighted to hear the voice on the other end. All the necessary paperwork was completed and he was on his way to Lexington, not far from his high school.
You’ll see Ridge at a lot of Rowan County prep games, and he liked West early on. West was a player that didn’t have a defined position and that’s not necessarily a bad thing.
“I really believe that his best basketball is ahead of him,” Ridge said. “He can play inside or out. He’s a good shooter, but we’re hoping he turns into a great one. He’s got tremendous upside because of his versatility.”
While West will no doubt enjoy the breakneck pace, he still knows patience will lead him to improvement and be the key to a Division I scholarship he covets. At North, he was one of the big green fish in a small pond in the 1A Yadkin Valley Conference. At Louisburg, West said “they’re all top notch JUCOs.”
Though the Storm’s offense can be an efficient assembly line, Ridge says the pride of the team lies in the halfcourt pressure defense. West admits defense is a facet of his game that needs toning.
“I feel like I still need to get better,” he said. “You got to play defense in college.”
The coachable West knows the best offense is a good defense.