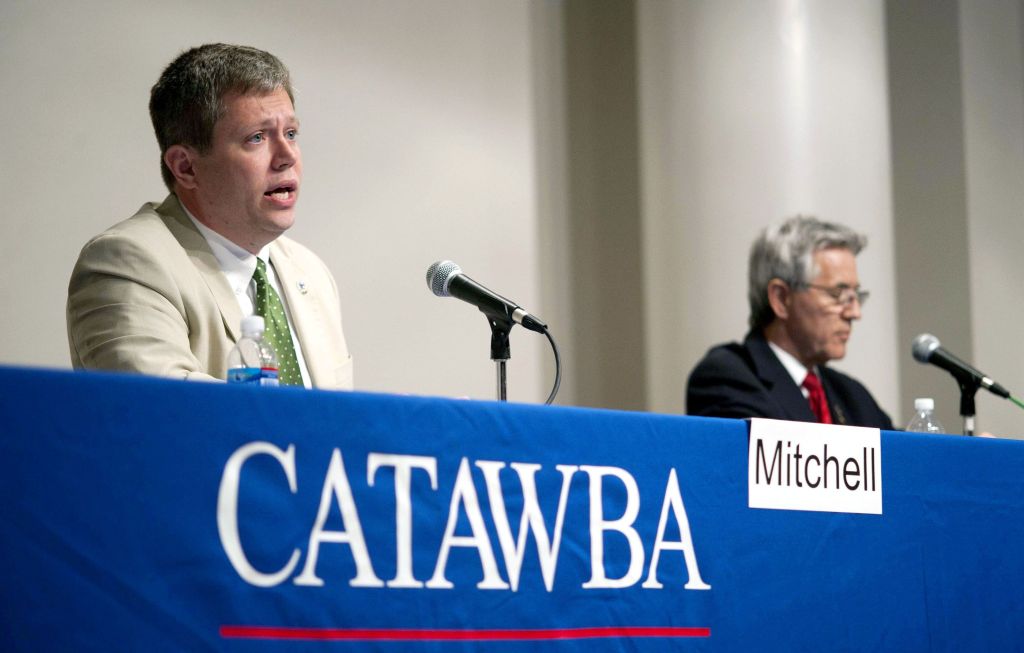 In the race for Harry Warren’s 77th District seat in the N.C. House of Representatives, the results of the May primary ultimately will determine who goes to Raleigh next year.
Longtime Rowan County commissioner Chad Mitchell took the stage with Warren, a two-term state lawmaker, on Tuesday in the Tom Smith Auditorium at Catawba College.
The two Republicans took turns answering a series of questions generated from the Post’s readers ranging from transforming the education system to rectifying the state’s Medicaid program to whether school boards should be able to sue commissioners.
The forum, co-sponsored by the Salisbury Post, Rowan County Chamber of Commerce and Catawba College, was taped by ACCESS16 and will be rebroadcasted.
“My children will not go to a school that teaches Common Core curriculum. Having taught in a school with Common Core curriculum – trust me, you don’t want it,” Mitchell said. “They have already come out and said the math standards are horrible (and) they do not train people for the science, technology, engineering and mathematical careers that we want our state’s children to be trained in. It is something we need to modify.”
During his 243 days as a legislator, Warren said he succeeded in fulfilling the 2010 and 2012 commitments he made when he ran for office.
“During 2010, I helped draft the legislation that ended forced annexation, was co-sponsor of the bill that removed the cap on charter schools and passed the E-Verify law, which made it tougher for illegal immigrants to get a job here in North Carolina,” Warren said.
Last year, Warren said he was very pleased to have no less than a dozen bills turn into law, including the Voter Information Verification Act which requires a photo ID for voters going to the polls in 2016.
The unemployment insurance reform bill and House Bill 937, for which Warren also took credit, “will help protect the integrity of the voting process and have helped put people back to work.”
For Mitchell, education is an extremely personal experience and needs to be personal for each individual student.
“One-size-fits-all schools do not work. We need to move to a system where we support a child going to a school where they can be successful,” Mitchell said.
The relationship between commissioners and school board members as set up by the N.C. Constitution is designed for conflict, Mitchell said.
“There are some reforms that we could look at that would eliminate the need for a school board to sue. I do not agree with taking away the right of a school board to sue a county commission for not giving enough money, unless it is accompanied by reform that makes that not necessary,” Mitchell said. “When you look at the state constitution, the (N.C.) General Assembly is the organization and the body that is supposed to be responsible for funding the operations of the school, yet in Rowan County, we commit over $33 million to the school system for their regular operations.”
Mitchell proposed coming up with a formula that dictates what each county should be expected to kick in for the operations of the schools, thus eliminating contentious battles and waiting on school boards to present budgets that are turned down.
Warren said there has to be some kind of recourse for school boards, but the ultimate fiscal responsibility lies with one body.
The paradigm, Warren said, is money is being used to pay attorneys to fight each other over money that isn’t there.
“It seems counterproductive and counterintuitive to have one body suing the other for something like that,” Warren said. “The whole thing about a non-responsive body, whether it is the school board or the county commissioners, is that the checks and balance in the system is here at election time.”
Contact reporter Jim Holt at 704-797-4246.