West standout will play at CVCC 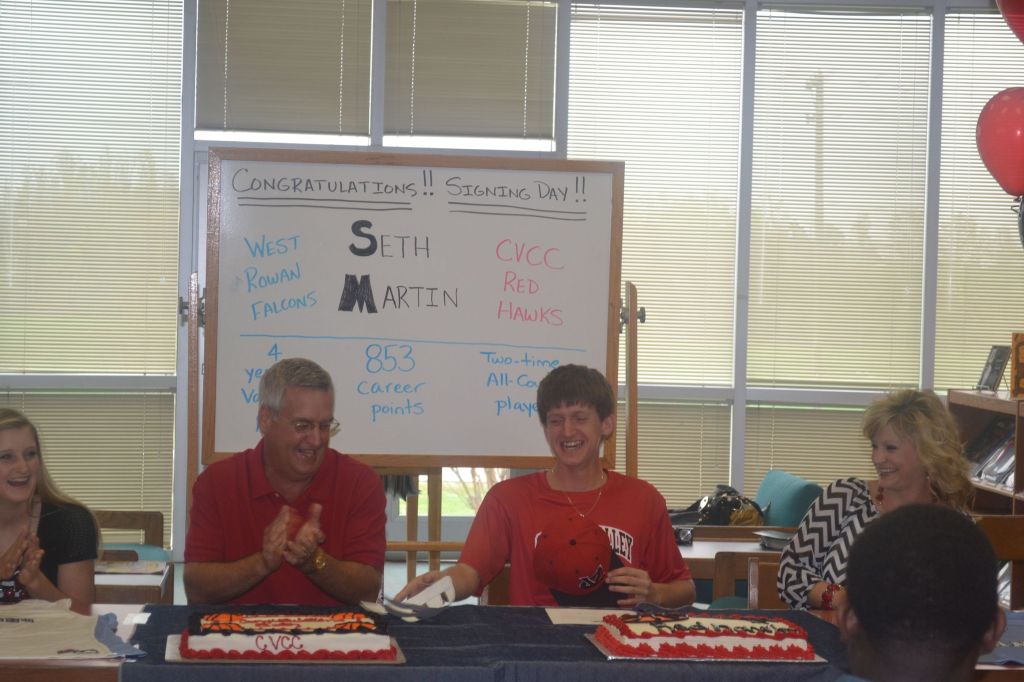 MOUNT ULLA — The greaseboard stationed behind his family as West Rowan’s Seth Martin signed with Catawba Valley Community College’s basketball program on Monday told most of the story.
Four-year varsity player. Two-time all-county player. 853 career points.
Not in their wildest dreams did anyone see that coming. Not Martin’s coaches. Not Martin’s family. Probably not even Seth Martin.
“He’s a real Horatio Alger story,” said West coach Mike Gurley, referencing a long-ago novelist who specialized in rags-to-riches stories. “Seth was a kid who was a sub in middle school, and I don’t think many people thought he’d even be able to play for our jayvee team. But here he is today to celebrate the opporunity to play in college — and he’s earned it.”
When Martin graduates he’ll do so as the No. 17 scorer in the history of a program that has produced far more than its share of legends and championships. At 5-foot-11, Martin isn’t big or strong or especially quick, but he’s moved up the Falcons’ career scoring ladder past tremendous players such as Dadrian Cuthbertson, Bam-Bam Mattox, Ken Clarke and Tim Hogue.
“If we’d still played 30 games a year like we used to, Seth would’ve been a 1,000-point guy,” Gurley said.
Martin is getting a chance to play for the CVCC Red Hawks — formerly the Buccaneers — mostly because he’s a great shooter. Not a good shooter — a great one. When Martin missed an open 3, West fans gasped and groaned. It was a shock.
“Seth’s the best shooter in the county,” teammate Celexus Long said. “It’s been a great experience playing with him, and he’s made me a better player.”
Martin was a freshman in November, 2010, when West was making its third straight run to a 3A football state championship and athletes such as Jarvis Morgan, B.J. Sherrill, Domonique Noble and Maurice Warren were still involved in the football playoffs as hoops got under way.
Gurley’s basketball team was so depleted that Martin, looking like the ballboy, suited up for the varsity in the early games. When West played on the road against a loaded Davie squad, Martin hit a flurry of 25-foot 3-pointers over 6-foot-6 guys and the Falcons pushed Davie to overtime.
“I knew I had to do it big,” Martin said. “Making those 3s at Davie gave me a chance to keep working with the varsity even when the football players came back.”
Gurley agrees that game was a turning point.
“I saw that we didn’t have anyone else like Seth,” Gurley said. “He could really shoot the ball.”
That was a good West team when it reached full strength, and it made it to the Western Regional in Greensboro. Martin hit the last three points of the season with a bomb against Hunter Huss.
“We lost, but that was a big shot as far as my confidence,” Martin said.
As a sophomore, Martin advanced from novelty act to sixth-man role. Gurley used him on offense and did his best to protect him on defense.
“When the other team was shooting free throws, I’d go to the scorer’s table to be in on offense,” Martin said. “Coming out of timeout, in situations where we were on offense, I’d go in.”
He averaged 4.9 points that year and scored in double figures twice.
The big leap came between his sophomore and junior seasons. and he also started to add inches.
“I worked really hard that summer on my overall game,” Martin said, “I was named one of the captains for my junior year, and we put together some good winning streaks.”
Martin averaged 11.7 points as a junior and had 20-point games against Salisbury, Mooresville and North Iredell.
Martin’s senior year obviously was his best. Other than a struggle in the Christmas tournament, he had a consistent season, scoring in double figures 19 times and averaging 13.0 points per game. He topped 20 three times in SPC games and finished his career with his best outing ever — a 28-point outburst at Morganton against eventual 3A state champ Freedom.
“I wanted to go out with a bang,” said Martin of his senior year.
Martin visited Davidson Community College and St. Andrews and had a recruiting trip to Warren Wilson scheduled, but he canceled it after making the 45-minute ride to Hickory to see CVCC. He played in a scrimmage and reportedly shot the lights out.
CVCC has an outstanding basketball facility. West has played regional games there and the SAC tournament was held there for many years.
“I liked everything about it,” Martin said. “The school, the facility, the coaches and the way the team plays. It’s a team that likes to score and the coach told me I know how to score.”
West recently enjoyed another success story at CVCC. Isaiah Cuthbertson, a late bloomer at West, used CVCC as a springboard to a scholarship at Mars Hill and was one of the SAC’s top rebounders this season.
Surrounded by family, teammates and friends, Martin signed with CVCC in the West media center, and the “Red Hawks” cake served mutiple purposes. He was signing on his 18th birthday.
He took a deep breath Monday and relaxed a little bit. Today, he’ll be back in the gym working.
“You have to be tickled for Seth,” Gurley said. “He’s a great example of what a kid can accomplish if he doesn’t mind putting in the work.”