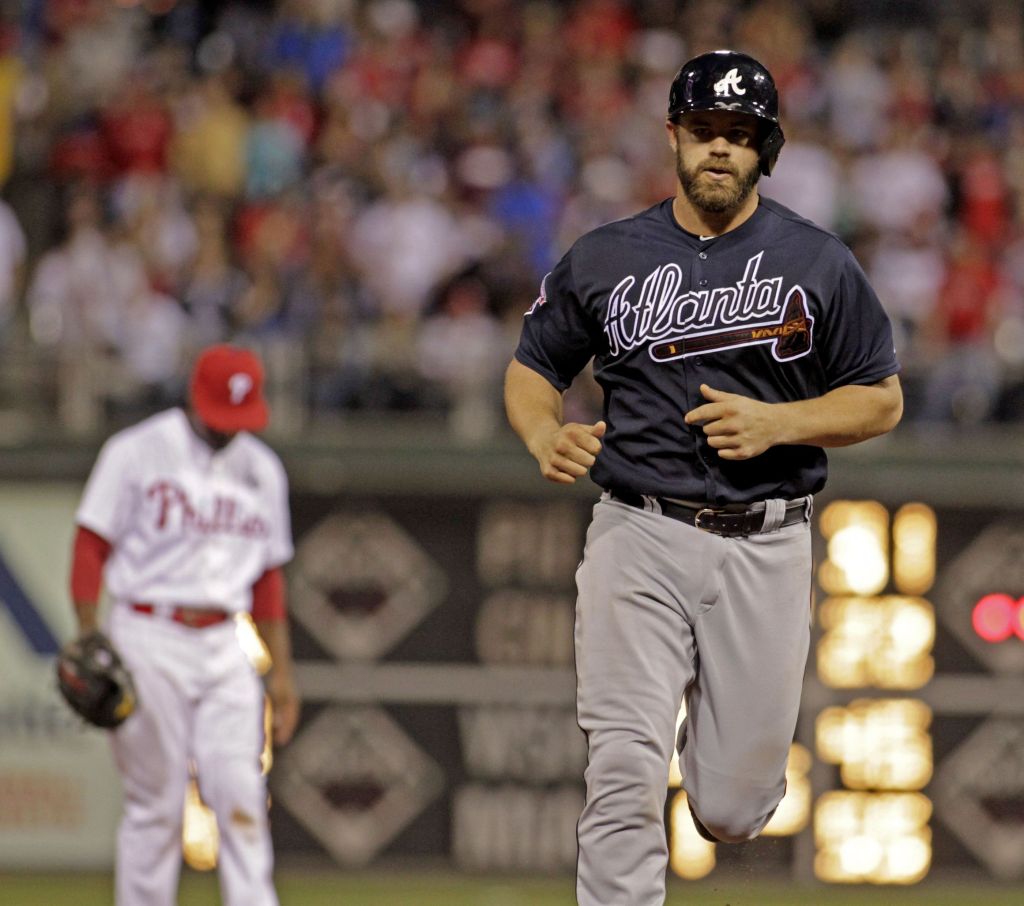 PHILADELPHIA — The Braves keep showing they are resilient and powerful.
Dan Uggla hit two home runs, including a grand slam in the ninth inning, Monday night that lifted Atlanta to a wild 9-6 win over the Philadelphia Phillies.
Evan Gattis also homered twice and Uggla drove in five runs as the Braves won their fourth straight. The teams combined for five homers and 12 runs in the final two innings.
Gattis, Uggla and Andrelton Simmons hit consecutive homers in the eighth that put Atlanta ahead 5-1.
“We have a lot of guys who can change the game with one swing,” Uggla said. “Tonight we were able to put some at-bats together. Didn’t have much going early on but we were able to get to them.”
Domonic Brown’s three-run homer capped a five-run bottom of the eighth that gave the Phillies a 6-5 lead.
But the Braves rallied against Jake Diekman (1-1). B.J. Upton walked, Freddie Freeman reached on a grounder when second baseman Chase Utley made a questionable decision to try for a forceout and Justin Upton walked to load the bases with no outs.
After Gattis struck out swinging at a 98 mph fastball, Uggla drove an 0-2 slider from Diekman deep into the seats in left.
“(Diekman) has electric stuff,” Uggla said. “It’s not a comfortable at-bat at all. He throws really hard and has great stuff. We’ll take it.”
Braves manager Fredi Gonzalez was impressed with his team’s comeback, but not surprised by it — especially at hitter-friendly Citizens Bank Park.
“It’s a resilient squad and in this ballpark we’ve seen it enough,” Gonzalez said. “If you make a mistake, it’s in the seats.”
Neither team’s closer was available. Philadelphia’s Jonathan Papelbon wasn’t used because he had pitched three straight days, and Atlanta’s Craig Kimbrel has a sore shoulder.
“For all those people who say anybody can close in the ninth, it’s a little different, a different animal,” Gonzalez said.
Gonzalez said Kimbrel, who experienced discomfort after recording his fifth save of the season on Saturday, is day to day.
Luis Avilan (3-1) wound up with the win and David Carpenter got his first save.
Ryan Howard homered and Marlon Byrd drove in two runs for Philadelphia. Utley had two hits, and is batting .489 this season.
“We made a comeback,” Philadelphia manager Ryne Sandberg said. “The guys really battled and had good at-bats. We just weren’t able to close the door in the ninth.”
Braves starter Ervin Santa matched his career high with 11 strikeouts. He pitched six innings and gave up one run and four hits.
“I’ve been so impressed with him,” Gonzalez said. “He’s got command, he’s got some life, he knows how to pitch.”
Gattis put Atlanta in front 2-1 with a two-run homer in the sixth off Roberto Hernandez. After the Braves hit three more homers in the eighth, the Phillies loaded the bases with no outs against Avilan.
Howard struck out looking, but Byrd hit a two-run single that made it 5-3. Brown gave Philadelphia the lead with his first homer since last Aug. 14.
The Upton brothers didn’t get any hits, but they almost hit each other. Justin sent a liner that nearly took out B.J. as he led off third base. B.J. had to dive out of the way, got up slowly and stared at Justin in the batter’s box in mock disgust.
NOTES: Freeman went 0 for 4, ending his nine-game hitting streak. … Phillies C Carlos Ruiz made two throwing errors, both trying to nab B.J. Upton stealing second. … Phillies RHP A.J. Burnett has been diagnosed with a hernia but will make his scheduled start on Wednesday. … Philadelphia manager Ryne Sandberg said before the game that MLB executive Joe Torre called him to say that both the umpires and replay officials incorrectly ruled on a play at the plate on Sunday. Sandberg unsuccessfully argued on Sunday that Tony Gwynn Jr. didn’t have a lane to home plate and should’ve been safe based under the new rules on catchers blocking the plate. … Philadelphia reliever Mike Adams will be activated from the DL on Tuesday. Adams, who is recovering from right shoulder surgery, hasn’t pitched since last June. … Atlanta RHP David Hale (0-0, 2.89) is scheduled to face Phillies LHP Cliff Lee (2-1, 5.50) on Tuesday night.