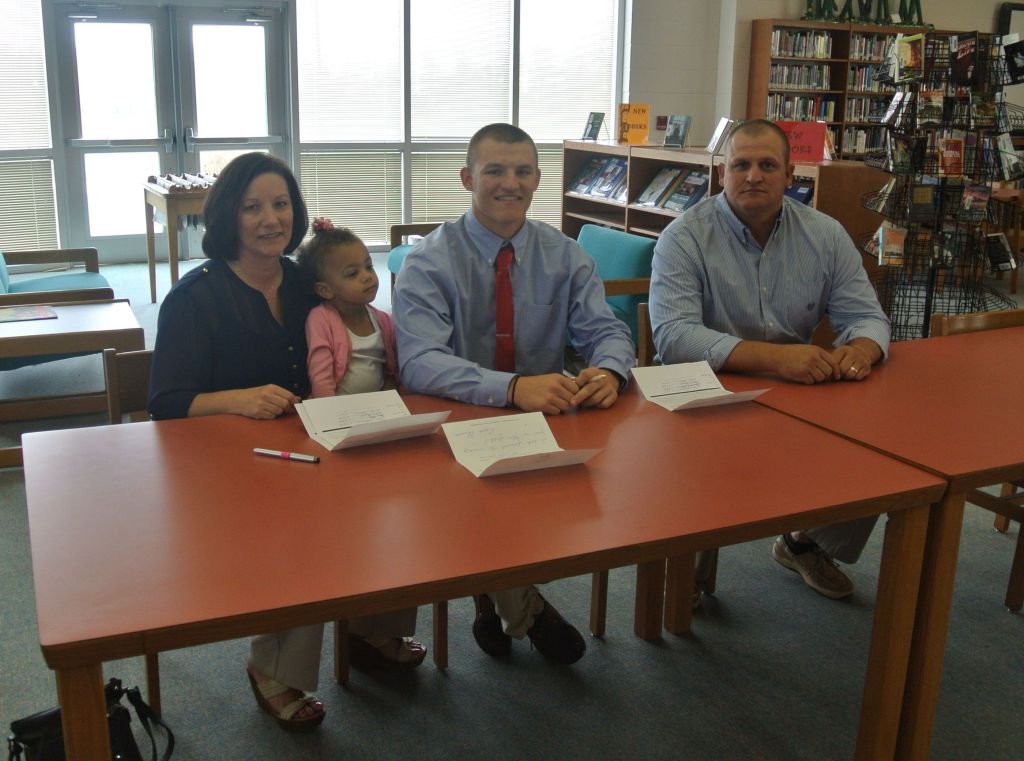 MOUNT ULLA — Nick Collins was West Rowan’s leading tackler on the football field last fall, but his linebacker days are officially over.
Collins is now embracing a baseball-only future, and he signed last week with junior college power Louisburg.
It’s a smart decision. While Collins loves baseball and football equally, and while his father James is a West football assistant, there’s only so far Collins can rise on the gridiron as a 6-foot-1, 200-pound linebacker.
In baseball, on the other hand, Collins’ athleticism really makes him stand out. He could develop into a Division I guy two years from now — or even a draft pick.
Those fall Saturday mornings when Collins woke up with evey muscle in his body aching reminded him of the serious wear-and-tear advantage that baseball always will have over football.
“Definitely you’ve got a longer life in baseball,” Collins said. “I had a decision to make, but it really wasn’t too tough a decision. Since seventh or eighth grade I’ve known it probably eventually was going to be baseball.”
West football coach Scott Young benefited from Collins’ hard nose and fearlessness, while West baseball coach Chad Parker is now enjoying Collins’ senior season. Collins has been all-county in both sports.
“Nick’s got athletic ability, but you’ve got to pick a sport at some point, and baseball is where more doors can open for him,” Parker said. “He’s getting scholarship money at Louisburg, so he’s going to get the opportunities to develop and to be seen by a lot of people. He’s gonna play 30 baseball games in the fall and 60 games in the spring and 20 more in the summer. Year-round baseball is a challenge that he’ll tackle head-on, and it’ll be exciting to see how he develops.”
Exactly where Collins will fit in at Louisburg is uncertain because he does have unusual versatility. He could play outfield, first base or third base for the Hurricanes, and he’ll get chances to pitch.
“He’s grown every year for us, from jayvee guy to an important cog in our program,” Parker said. “He could be a two-way guy for Louisburg. We haven’t gotten him on the mound that much because we’ve got Michael (Ball) and Omar (Bautista), but he’s a talented pitcher.”
Collins played multiple positions for the Falcons as a junior. This season, he’s been the center fielder and has pitched occasionally.
During his time at West, Collins has participated in baseball and football workouts on the same day frequently. During the recruiting process, most of his workouts for college baseball coaches came on Saturdays following Friday night football games.
One of those Saturday workouts was at Louisburg. Collins made the trip with his father and teammates Ball and Michael Pinkston. Pinkston caught, and Ball and Collins threw.
“The coach told me he could tell I was a multi-sport athlete,” Collins said. “He also said he could tell I would listen to coaching.”
Keith Shumate is the head coach at Louisburg. He was the head coach at North Carolina A&T 15 years before taking the helm of Louisburg’s Hurricanes.
“Louisburg is a good school with good coaching,” Collins said. “Getting a scholarship was a big goal this year, so it’s a great feeling and a relief to sign.”
Louisburg’s history dates back to the 1700s, and it’s one of the nation’s oldest two-year schools. Former MLB outfielders Greg “Pee Wee” Briley and Otis Nixon were first-round draft picks out of Louisburg. Long-time NBA guard Blue Edwards also put in two years at Louisburg before he moved on to East Carolina.
Whether Collins can become a notable alumni remains to be seen, but it’s a fact that no one will work harder to maximize his skills.
“He’s one of the hardest-working kids I’ve ever seen,” said Harrison Baucom, who has been Collins’ teammate in football and baseball. “You’ll never catch Nick not going hard. He’s non-stop, running to the dugout, running onto the field. Seeing a work ethic like he has, has been a lot motivation for me.”
Collins was invited to play in the Under Armour Preseason All-America tournament in Arizona in January and competed against some of the nation’s top prospects. He has the drive to keep improving and has his head on straight. He credits his parents for that.
“They’ve pushed me to be the best I can be, but they’ve also been supportive,” Collins said. “Whenever, I’ve had a bad game, they’ve been there to tell me, everything was going to be all right. They’ve kept me faithful.”