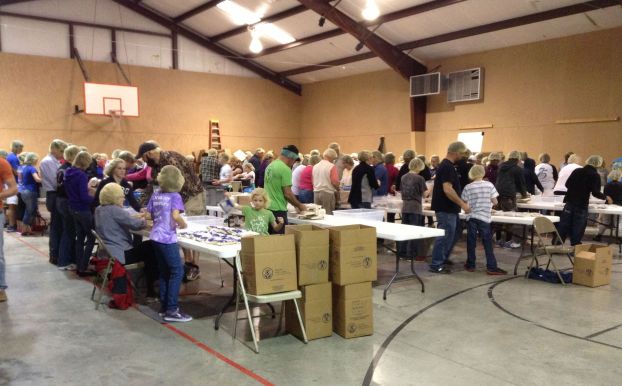 MOUNT ULLA — As the morning shift of food packing drew to a close, 11-year-old Gabe Coffield pushed his table to finish with the most cases packaged.
Known as “The Motivator,” Gabe said, “Chop, Chop!” while encouraging his table to quickly package the next case of dehydrated food.
Centenary Methodist and project director Carla Kluttz were all on a mission on Saturday morning, March 29. More than 200 volunteers worked two shifts with a goal of packaging over 100,000 meals for Servants With a Heart, a humanitarian food-aid and service organization.
Servants With a Heart sends the food packaged to countries in need, particularly Nicaragua, and also provides food for backpack programs and food banks.
The food packages are made from four readily available dried ingredients that are easy to package, have a long shelf life and require only boiling water to prepare. Ingredients used include long-grain white rice, crushed soy, a dehydrated blend of six vegetables and a vegetarian blend of vitamins and minerals.
Kluttz said it was Centenary’s third year packaging the meals.
“Last year, we were more church group driven,” Kluttz said, “but this year we have volunteers and random groups from all over our area. A small group represents the Crosby Scholars and another group is here from Lake Norman Charter High School. We are glad to get all the help that we can. We love this ministry.”
Fundraisers throughout the year provide the means to have the annual packing days. Kluttz said, “We had a 5K, a fashion show and spaghetti and pancakes suppers to get the required $7,500 in hopes of packing 100,000 meals.”
Kluttz is also the race director of the annual 5K at Centenary, appropriately titled “Will Run for Food 5K.”
Jeff and Suzanne Yoh from Servants With a Heart came back again to supervise and motivate the packers.
Jeff said his wife was better at interviews, but he had something to say. “Two things I am especially proud of are that we (at Servants With a Heart) have now packaged 3,365,000 meals over three years, and that we set aside about 10 percent of packing totals for domestic food banks.”
Jeff quickly hustled off to get more supplies for a packing table.
While preparing samples of the dehydrated food products for the volunteers to eat, Suzanne Yoh complimented Centenary Methodist on their effort.
“This is a super enthusiastic church, one of the few that we have now returned to on three separate occasions,” Yoh said. “There are lots of kids here today, and this operation is a great community builder.
“Jeff and I will be working with churches to pack every weekend in April, but normally we do this about twice a month. The best thing to remember is that one person on one shift packs enough food to feed a child for a year.”
Production and community involvement were on the minds of all those at 11 packing tables. As a group, they set a goal of breaking last year’s record and having a lot of fun. Sharon Waller, affectionately known as “Captain Ironpants,” pushed her group to compete with Coffield’s table.
“She recruits her volunteers and lets them know if they are not keeping up,” Kluttz said. “They don’t stop for breaks either. They work ‘til it’s over.”
Some of those working at Waller’s regimented table were Wiley Goodman, McKenzie Callon, Brenda Goodman, Jed Waller and Adele Goodman.
Crosby Scholars Javin and Jordan Goodine, Koby Debose and Kendall Reid all enjoyed packing the dehydrated food. They attend North Middle School except for Javin, a student at North Rowan High School.
Jordan Goodine said, “This is a great cause, and we can do our part to make the world a better place. A big plus for us is to get community service hours for the Crosby program, but we are willing to work at any place that might need our help.”
Marae Reid, Kendall’s mother, said, “We got an e-mail from the Crosby Scholars about this opportunity. I spoke to Carla Kluttz and then the Goodines, and we all ended up here working. Everyone is nice and friendly, and patient too. This is a team, a real assembly line.”
Crosby Scholars join the program in middle school and get instruction on academics and guidance, both personally and financially, through high school with the goal of allowing all students to have the opportunity to attend college.
Gloria Standley of Troutman brought her grandsons, Collin and Corbin Charity of Charlotte.
“I have been to Nicaragua and have seen how much this food is needed,” Standley said. “This is my first time at Centenary, but I have packaged in other churches several times.”
The future looks good for Samaritan’s Purse and their food packing project. Several large mega churches have packing dates scheduled.
Suzanne Yoh said, “We packed our millionth meal in November of 2012, our second million in April 2013, our third million in November of 2013, and we are well on our way to finishing 4 million very soon.”
For this year’s packing day at Centenary, Kluttz reported a final packaging number of just over 101,000 meals.
For more information on Servants With a Heart, go to www.servantswithaheart.org

Over a year ago, Salisbury City Council formed the Nuisance Animal Study Committee to address animal-related issues. One of the... read more