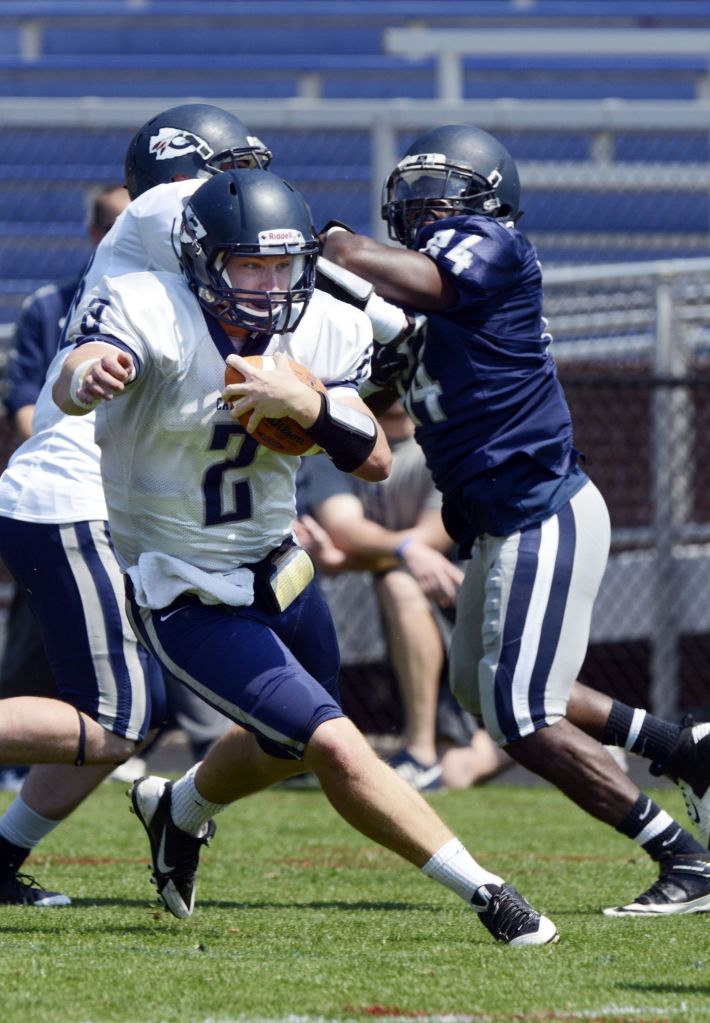 SALISBURY ­­— Sports historians say April 12, 1970, is most notable for the plaques that were dedicated to Mickey Mantle and Joe DiMaggie at Yankee Stadium, but that’s also the day Curtis Walker entered the world.

Now in his 16th month as Catawba’s football coach, Walker seems to be gaining on Mantle and Joltin’ Joe. He’s popular, he’s energetic, the Indians’ program took a step forward with a 6-5 record in his first season, and the schedule has been upgraded for 2014.

Walker technically went 1-1 on Saturday when Catawba’s White team beat the Blue squad 10-7 in the annual Spring Game, but he walked and talked like a winner. He even allowed himself a laugh as he dried off after players drenched him with a “Gatorade dump” to celebrate his 44th birthday.

“I think we’ve built some unity in the last year,” Walker said. “We had a good day today, and it was great to see a great crowd out here supporting the efforts of these young men.”

Catawba will have a new quarterback this fall after a successful one-year partnership with Danny O’Brien that benefited both parties. Mike Sheehan, who backed up O’Brien last season, and B.J. Sherrill who started in 2012, took most of the snaps Saturday.

Sheehan directed the winners and scored a TD for a 7-0 halftime lead on a short run that was set up by two acrobatic, big-time catches by Diante Hodges.

Following a fine catch by Jason Williams, Sherrill plowed for the Blues’ TD in the third quarter on a battering-ram sneak.

“It was just good being out there with the guys competing again,” said Sherrill, who directed West Rowan to three consecutive 3A championships from 2008-10 and threw a Rowan record 66 touchdown passes. “We had good energy today, and it’s been like that all spring. Guys have been hopping around.”

Yogi Davis had a big interception and Kegan Funderburk was a pass-rushing terror, but no one had a better spring than White DB Mark McDaniel, who starred at South Rowan. McDaniel ended the first half with an interception and his forced fumble late in the game was the biggest play all day.

With the White team clinging to a 10-7 lead after a Troy Mitchell field goal with 7:38 remaining, Cary Littlejohn broke a long run for the Blues, but McDaniel stripped the ball at the end of his jaunt.

“Cary held the ball out wide, and my team needed a play,” McDaniel said.

Sherrill said McDaniel has been making plays since spring practice started on March 19.

“I wasn’t surprised he made that play because he’s been a leader all spring,” Sherrill said. “He’s probably the best football player on this team right now.”

If there’s an area where Catawba has obviously made strides it’s the offensive line. Former Indian star Brian Hinson coaches a maturing group that punched holes as the White team ran out the clock.

“We’ve gotten a lot better,” Hinson said. “Guys have gotten in the weight room, and they’re stronger. We’ve also got scatbacks who can really make an offensive line look good. All they need is a seam.”

Walker liked what he saw and viewed the final score as Indians 1, Injuries 0.

“I’m most excited about coming out of the spring healthy,” he said. “We operated well enough to get in all the work we needed to do, but we also took care of each other.”

Whether the Indians can take care of opponents in Walker’s second season is something they’ll start finding out on Sept. 6 when they visit Davidson for a night game.

For now, there are plenty of reasons to be optimistic.

“I honestly believe we will be a great team,” McDaniel said. “We showed today we’re moving forward and not backward, and that’s a great feeling to have.”