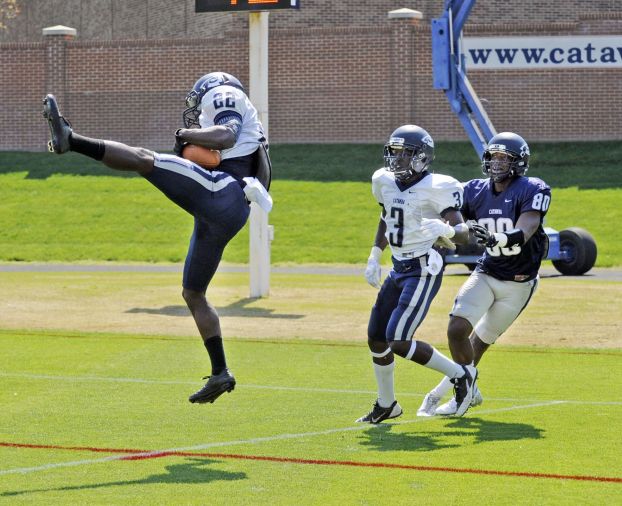 Area athletes update …
Tennessee’s Tavis Bailey (A.L. Brown) has won the discus in three straight meets to open the outdoor season.
Bailey, who set the school record in the event in March in a meet at Alabama (202 feet, 6 inches), threw the discus 199-3 in Saturday’s Tennessee Relays.
An offensive lineman in his days with the Wonders, Bailey also placed second over the weekend in the shot put with a career-best effort of 63-3.5 that was the fourth-best throw in Tennessee history.
“It feels good to have a good shot put mark outdoors,” Bailey said. “I had it indoors but hadn’t put it together outdoors.”
• Western Carolina’s Alisha Bradshaw (Salisbury) swept the throws in Saturday’s Beynon Classic.
Bradshaw threw a season-best 149-4 in the discus. She threw 168-1 in the hammer and 43-7.25 in the shot.
• Western’s Keith Leonard (East Rowan) placed second in the pole vault in the Beynon Classic. He cleared 15-5.

Pro football
Most are projecting Arkansas defensive end Chris Smith (West Rowan) as a third or fourth round draft pick by the NFL.
He’s ranked among the top 10-12 defensive ends and as one of the top 100 to 125 players.

College football
• Virginia’s Kevin Parks (West) sat out the Spring Game with injuries, but he’s been voted one of the team captains for his senior season.
• Guilford junior Jordan Farmer (Davie) was named to the All-ODAC sportsmanship team.
• In Catawba’s Spring Game, B.J. Sherrill (West) rushed three times for 21 yards and a TD and was 5-for-11 passing for 75 yards. Trey Mashore carried five times for 25 yards. Nathan Lambert (South Rowan) was 1-for-2 passing for 11 yards and rushed three times for 6 yards.

College baseball
Army’s Jon Crucitti (West) went 3-for-4 and scored two runs in a 10-4 win against Bucknell on Sunday.
• Brett Huffman (West) had three hits for UNC Pembroke in an 8-7 victory against Francis Marion on Saturday.
Preston Troutman (East Rowan) had `two hits for Appalachian State in a 6-5 win against The Citadel on Saturday in Boone.
Troutman had a triple in a 10-6 win over Citadel on Sunday, and Brian Bauk (Salisbury) went 1-for-3 and scored a run.
• Corey Randall (Davie) pitched seven strong innings for UNC Asheville in a 3-0 loss to Campbell on Sunday.
• Avery Rogers (East) pitched a scoreless ninth for Guilford in an 11-2 win against Emory & Henry on Sunday.
• East Carolina’s Eric Tyler (South) had the game-winning single in the ninth inning in a 2-1 victory at Rice.
• UNC Wilmington’s Andy Austin (East) drove in a run in a loss to Hofstra on Saturday.
Ş Jacob Barber (Davie) drove in three runs for Winston-Salem State in an 8-4 win against Lincoln on Sunday.
• Rob Bain (NW Cabarrus) is 3-1 on the mound for Davidson.
College softball
Kaitlyn Jones (South) had a hit in both games of a doubleheader with Mount Olive on Saturday, but the Crusaders lost both games. Katherine Starnes (South) went 2-for-3 for BA in the second game.
• Steffi Sides (East) went 2-for-2 and drove in a run in Guilford’s 8-4 loss to Emory & Henry on Sunday.

Minor leagues
Jerry Sands (Catawba) is batting .324 with two homers and seven RBIs for Durham, Tampa Bay’s Triple A team.
• Jordan Jankowski (Catawba) hasn’t been scored on in his first three relief appearances for Double A Corpus Christi and he’s struck out six.
• Daniel Wagner (South) is 1-for-5 for Double A Birmingham. He was 1-for-2 on Friday.
• Whit Merrifield (Davie) is batting .219 for Double A Northwest Arkansas.
• Justin Seager (NW Cabarrus) is batting .263 in Class A.
• Corey Seager (NW Cabarrus) hasn’t homered in his first 10 games, but he’s batting .333 in advanced A ball.