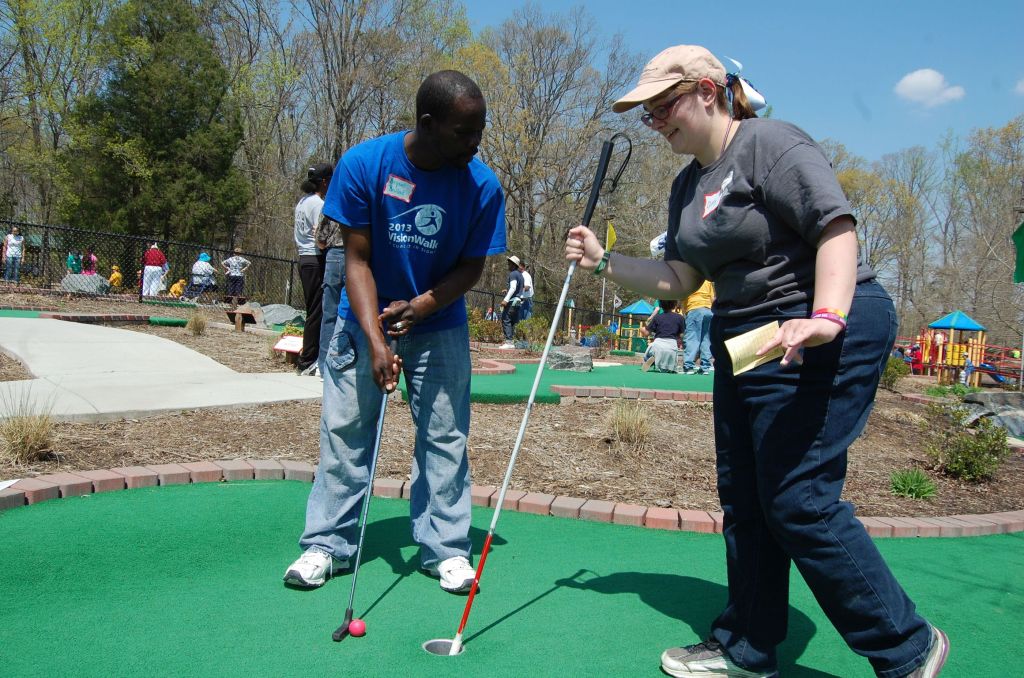 For more than 80 visually impaired golfers hitting the miniature greens Saturday at Dan Nicholas Park, being blind was not a handicap.
It was a hindrance.
Dozens of men and women of all ages turned out to the 26th snnual Statewide VIP Putt-Putt Golf Tournament.
Golfers and their guides came from about 15 different counties, including Catawba, Guilford, Alamance and Gaston, to tee off at 10 a.m. under the hot sun.
“This event is more about the camaraderie, the friendship and being around other people than it is trying to win,” said Sheldon Birdsong. “I’ve been getting mostly twos and threes with the exception a few fours and fives.”
Birdsong, who has been attending the tournament for seven years, rotated between the course’s holes along with other visually impaired people and his guide, Rachel Rivera.
Birdsong is from Caldwell County.
Each golfer played a total of 36 holes.
Bryant Ballad, who lost his sight due to diabetes about eight years ago, came from High Point and said the tournament is a great chance to network.
“There are a lot of us out there — visually impaired and totally blind,” Ballad said. “There are plenty of things to get us out of the house. Events like these give you the strength to accept what has happened to you.”
The visually impaired didn’t let their disabilities hold them back, and several of them walked away after logging a hole-in-one.
Vernon Richmond, 66, is a Vietnam veteran who lost his sight due to glaucoma in 2007.
Richmond and his guide, Steve Glahn, came from Alamance County to participate in the event.
“The only thing that is going through my head is making the putt. I’m totally focused on that,” Richmond said. “Sometimes things don’t work out that way.”
Vernice Gallon, the county’s therapeutic recreation supervisor, helped to organize the event.
“This is an opportunity for them to have fellowship and see some people from other counties they may only get to see once a year,” Gallon said. “Being visually impaired, your resources are limited.”
The blind and visually impaired on the course certainly were competitive, Gallon said.
“It’s not all kumbaya. They want those trophies,” Gallon said. “They keep having their guides come over to glance at the scoreboard and see who is beating who and by how much.”