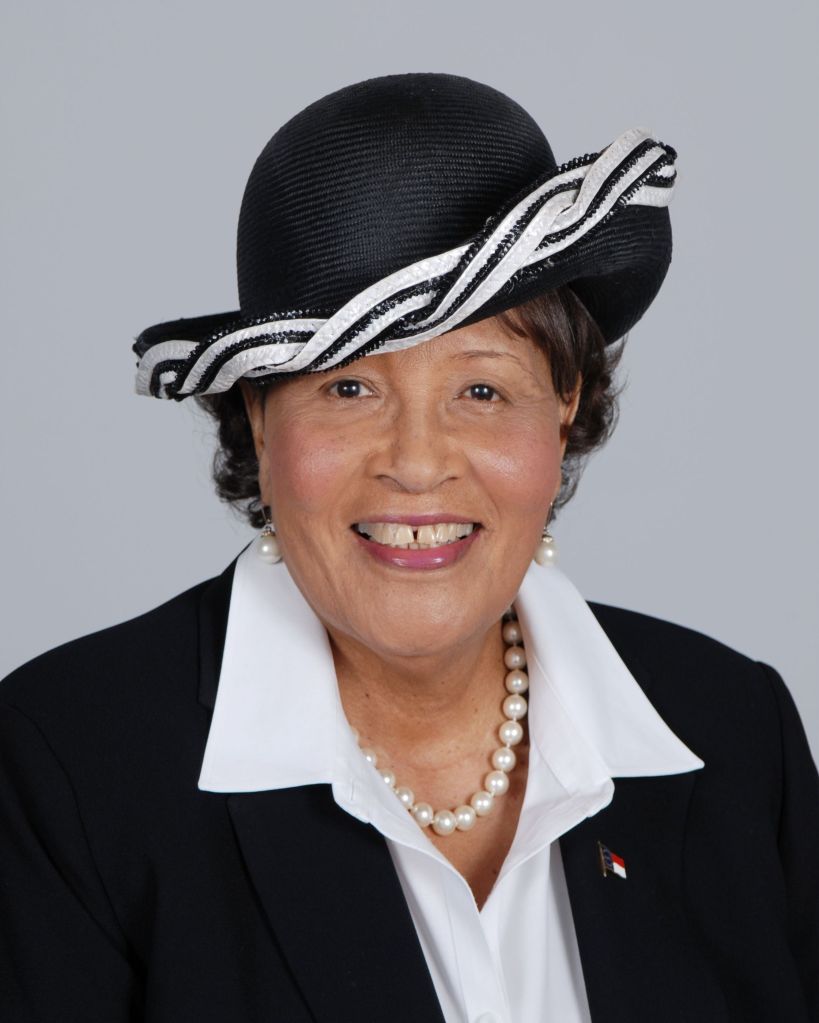 Voters visiting the polls in next month’s primary might think they are seeing a redundancy on the ballot regarding the race for the U.S. House 12th District.

That is no mistake.

There are two races for the seat — one that will put Democrat Mel Watt’s successor in to serve until the end of the year, and another that will decide who takes over next year.

The district currently is vacant since Watt, who had represented the district since its re-establishment in 1993, resigned to head the Federal Housing Finance Agency.

The candidate filling Watt’s unexpired term will serve for less than two months, and either the same or a potentially different candidate will take over in January.

Seven Democrats and two Republicans are vying for the spots.

All bring unique experiences and skill sets to the table.

Six of the Democrats have paid the filing fee twice and are running for both filling Watt’s unexpired term and continuing on next year as representative of the 12th District.

Here is a look at who is running:

N.C. Rep. Alma Adams, D-Guilford, is looking to take her political career to the federal level.

A retired professor and working artist, Adams said her long record of accomplishments and experience as a teacher more than qualify her to serve the people residing in the 12th District.

“I served for 40 years (in education), and I have been a strong fighter for working-class people and folks who typically don’t have a voice – women and children, students and small businesses,” Adams said.

Adams said she has led the fight to increase the state’s minimum wage, which ultimately will allow people to provide for themselves and their families after working all day.

“We have got to provide the resources for our teachers to do what they need to do for our students,” Adams said. “We need to make sure our teachers are secure in terms of tenure.”

Adams said she is going to represent all of the counties in the 12th District, and children are “our most precious resource.”

Government has a responsibility to intervene when things are not happening at the local level, Adams said.

“I’ve been a fighter for women’s issues for a long time and women’s reproductive health,” Adams said.

As board attorney for Charlotte-Mecklenburg Schools, Democrat George Battle said he has unique insight versus the other candidates as to education and health care.

“We have a lot of potential and the ability to do good things, but we have to get a handle on income inequality,” Battle said. “If we are going to tackle the problem, we need to make sure everybody is paid a living wage, has access to a first-class education and access to affordable health care.”

The 12th District has some of the best school systems in the state, Battle said, but public education has been “chronically underfunded” and elected officials need to start “putting their money where there mouth is” in terms of funding schools.

As a congressman, Battle said he will be able to step to the table immediately in Washington regarding issues about health care and education given his experience.

“I won’t have to wait 10 years to familiarize myself,” Battle said. “I can start contributing from day one.”

Marcus Brandon, another Democratic state lawmaker, said his effectiveness in the N.C. General Assembly distinguishes him from his competitors in the race.

“The Republicans in Washington, (D.C.), are the same ones in Raleigh. You have to be able to know how to work in that type of environment to get things done,” Brandon said. “We need effective representation and have to deal with the structural issues.”

Being a great voice for Democrats is not enough, Brandon said.

Brandon targeted poverty as the biggest issue facing the district.

“We have to make sure a sound, high-quality education is available for everyone, and that is paramount for communities like Salisbury and all throughout the 12th District,” Brandon said.

While the district is extremely diverse in terms of demographics, Brandon said it is very similar in terms of income, and a lot of people are having trouble finding jobs.

“It’s about addressing the structural concerns in the community and being effective,” Brandon said. “It is education inequality, environmental inequality and employment inequality.”

Brandon also wants to revamp how ex-offenders are treated in terms of employment.

“They have to check that box on an application,” Brandon said.

Ex-offenders failing to get jobs produces a cancer on society when they have to continue to rely on the government instead of getting a job and supporting themselves, Brandon said.

“We don’t need a Band-Aid or talking points in the 12th District,” Brandon said. “We need to go in there and get our feet dirty.”

One of the two Republicans in the race, Vince Coakley is a radio talk show host and former WSOC TV personality who wants to empower people rather than government.

The solution to problems facing the 12th District is not more government or spending tax dollars, Coakley said.

Obamacare has instilled a level of uncertainty in the economy, Coakley said, and businesses are not hiring the way they would like to hire.

“We are at a place where we need to get the shackles off businesses, especially small businesses who have been upended by the Affordable Care Act,” Coakley said. “The regulations are hamstringing the businesses in this economy.”

Coakley said he doesn’t believe education is a federal issue, and said he refuses to apologize for it.

“One of the things I want to do is help us recover our educational system. We first have to start with families – creating a culture that values education, family and favoring school choice,” Coakley said. “Educational money needs to follow students, not systems. It is the choice of parents where they want to send their children.”

“Big government” has been tried, Coakley said, and now it is time to get back to free market principles and cutting out crony capitalism and socialism.

“We need a level playing field where every individual has an equal opportunity,” Coakley said. “Socialism is government’s effort to micromanage, and that needs to stop as well.”

Malcolm Graham, a Democrat, said he brings a long list of community achievements and service in the nonprofit world to the race.

“I know what it takes to run a business, and I’ve spent five years in major corporations,” Graham said.

Graham spent about a decade in the N.C. Senate and six years on the Charlotte City Council.

Increasing minimum wage to at least $10.10 is crucial, Graham said.

“We need to be working with small businesses, who hire more people than major corporations combined. They need to have the tools and the capital so they can succeed.”

Graham said he wants to work with small business owners to be successful.

“I won’t go to Washington and be one of the richest guys there. My situation reflects the people I represent,” Graham said. “I know the value of hard work and the commitment needed to make a difference.”

Graham said he plans on being “very accessible” as a congressman and making it a priority to communicate with voters.

“It is not just important that we pass their bills. That is why they call it a representative,” Graham said. “I’m user-friendly.

Everywhere Graham has gone, the state senator said he has an impressive resume of getting the job done for the people.

According to James Mitchell’s website, the 12th District not only needs jobs, but workers need better wages.

“This is why I am an ardent supporter of the business community,” the Democratic candidate wrote. “By supporting small businesses, we increase their ability to grow and hire new employees.”

Before becoming an elected official, Mitchell spent 20 years as a computer programmer working for and with small businesses, so he knows “firsthand their ability to create jobs, cultivate innovation and transform communities.”

In addition to supporting the crucial work of teachers and administrators in the public schools, government must support the students beyond the classroom, Mitchell said.

“I am committed to ensuring that the American Dream remains within everyone’s reach. We must ensure that pathways to opportunity are equally available to everyone in our society,” Mitchell wrote.

Curtis Osborne, a Democrat, said he has the experience of representing hardworking individuals on a daily basis as an attorney.

“I love people and I enjoy people. I serve them by way of representing them on matters of employment, discrimination or wrongful death involving a family member,” Osborne said.

Since Osborne has been a solo practitioner for the last 15 years, he said he has a keen knowledge of running a small business, having to make overhead as well as doing payroll and marketing.

“I have a military background, and may be the only candidate who came from public housing. I know what it is like to want something and not have it,” Osborne said. “I pride myself on having pulled through.”

Congress must amend the Voting Rights Act of 1965 “so that the full intent of what the law was designed for will be realized.”

The state has the most suppressive voting laws in the country, Osborne said.

“Unemployment is another issue, especially here in the South. The 12th (District) is a majority minority district,” Osborne said. “When unemployment goes up, it goes up even higher for African Americans. We need to work to bring jobs and industries.”

Osborne referred to children as “our greatest asset.”

Rajive Patel, a Democrat, is a decorated Vietnam veteran who wants to remove the stigma of poverty that exists in the 12th District.

“Our education system in North Carolina has failed us. It’s not the teachers, because the system doesn’t take care of the teachers,” Patel said. “They are some of the lowest paid in the nation. Without these teachers, the children won’t be successful.”

Mental health is a big issue in society – one that affects people every day and has to be addressed, Patel said.

“The churches are going to have to step up. They are the cornerstones in the community. They need to tear down the walls of denominations,” Patel said. “Denominations separate us.”

As a congressman, Patel said his main objective will be changing the face of poverty in the district.

“It is shameful, and we need to remove its stench,” Patel said.

Leon Threatt said his personal convictions, life experiences, leadership and character cause him to stand out above his competitors in the race.

Other than Coakley, Threatt is the only Republican in the race.

“It is my commitment to see real, lasting positive change for our nation,” Threatt said.

Part of the solution to the challenges in the education sector is providing families with choice, Threatt said.

The money should follow the child, Threatt said, and tax credits should be given to families who opt to homeschool.

“I think family is a major issue. Education, employment and leadership all come down to the family. We are witnessing the breakdown of the family,” Threatt said. “The marriage amendment needs to stand.”

Serving as a pastor, Threatt said there is a moral failure in society and a breakdown in morality.

“I think our society needs to have a morality checkup. The morality of America is being tested, and Christian values need to be reinvested and re-embraced,” Threatt said.

Threatt served as an officer in the Charlotte-Mecklenburg Police Department as well as in the Marine Corps.

“I’m all about serving, and I’m willing to give my life for causes that are important to us. That is what sets me apart,” Threatt said.