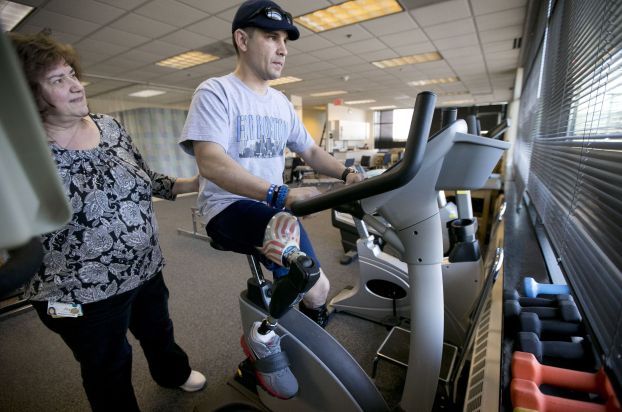 By Denise Lavoie and Paige Sutherland
Associated Press
BOSTON — Every time Roseann Sdoia comes home, she must climb 18 steps — six stairs into the building, another 12 to her apartment. It is an old building in Boston’s North End, with doors that are big and heavy, not an easy place for an amputee to live.
When she left the hospital, a month after the Boston marathon bombing, she had a choice: She could find another place to live, one more suitable for someone who wears a prosthetic that replaces most of her right leg. Or, she could stay.
“Early on when all this happened, so many people were telling me to move out of the city and move out of my apartment because of the stairs and I don’t have an elevator and parking is not very convenient,” she recalls. “But I have been able to get past all of that.”
In that, she mirrors Boston itself.
In the course of a year, limbs have been replaced, psyches soothed, the wounds sustained in a moment at the marathon’s finish line have at least begun to heal. At the same time, a city shaken by an unthinkable act of terrorism has returned to its usual rhythms — sadder, but some say stronger, as well.
“I have to tell you, honestly, Boston is a better city now than it was before,” says Thomas Menino, who, as Boston’s mayor, left a hospital bed where he was recovering from leg surgery to rally his city after the bombings. “People learned how to deal with each other, they had to deal with a tragedy.”
Not that it’s been easy. Three people were killed that day, and more than 260 were injured, and the legacy of trauma and lost limbs remains — as does the shock of having endured a terrorist attack on Marathon Monday. Nor can Bostonians forget the fear that gripped a city locked down in the midst of a manhunt.
But Boston has been able to get past all of that. Copley Square is no longer littered with impromptu tributes to the dead and injured; they’re now on display in an exhibit at the Boston Public Library, where Robert White of Lynn saw meaning in every teddy bear and pair of sneakers: “Every last one of the items says ‘Boston Strong’ or ‘I will return next year.’”
The Red Sox — who wore “Boston Strong” patches through their epic ride to the championship last year — are playing ball again. “The city really came together after the Red Sox won the World Series,” says Mary Ellen Cahill, of Canton. “It was such a moment of unity and togetherness …
“We are unified, not terrified.”

Roseann Sdoia is 46 years old, a vice president of property management for a Boston development company. She is a cheerful woman; she smiles broadly when she arrives at the Spaulding Rehabilitation Hospital in Charlestown for physical therapy.
“It’s just my nature,” she says. “I’m not a negative person. I’m not a Debbie Downer.”
Still, she says, she cries every day.
“What is sinking in is this is for life — that it is how I have to live, how I have to walk. What is sinking in is that life has changed,” she says, her face awash with tears.
Sdoia is a runner, but she did not take part in the marathon. She was at the finish line on April 15, rooting for friends in the race, when the second bomb went off. Aside from her leg injury, she suffered hearing loss. She was with four girlfriends; three of them lost hearing, and the fourth was unscathed.
“It was virtually they were on one side of the mailbox and I was on the other,” she says. “So if I stood on the other side of the mailbox, I wouldn’t have been injured. … I was nosey. I wanted to see our friend Jen coming down the road first, so it’s my own fault.”
She goes to Charlestown twice a week for hour-long workouts with the physical therapist, and then she hops on the rowing machine to build her endurance. She aims to run again, a hobby she loved doing before her injury.
“Other than losing the bottom of my right leg, I’m still me,” she says. “I haven’t changed, I am still the same person I was before.”
And yet, so much has changed. She had to take more leave from the job she loved. Winter, and snow, were tough to handle. She’s had to learn how to tackle daily tasks differently.
“You don’t just jump in the shower,” she says. “I have to make sure I have everything in the bathroom to put my leg back on. I can’t feel the (vacuum) cord on this leg, so nine times out of 10 I’ll end up with it all wrapped around at some point.”
Talk with other survivors and you’ll hear the same story. Marc Fucarile, a 35-year-old roofer from Stoneham, also lost his right leg from above the knee; he has shrapnel in his heart, and still could lose his left leg. He was the last victim to leave Massachusetts General Hospital, 45 days after the bombings.
“Everything has changed,” he says. “How I use the bathroom, how I shower, how I brush my teeth, how I get in and out of bed.”
His 6-year-old son, Gavin, does not always understand. “Gavin is like, ‘Hey, you want to go out and play?’ and I’m like, ‘There’s a foot of snow. I can’t do snow. We’re not going out and playing right now, sorry, buddy.’ It breaks my heart.”
He, too, has been unable to return to work. He’s received $1.1 million from the One Fund to pay for his medical needs, and a fund has raised $184,000 for other uses (he still has huge out-of-pocket expenses — he had to move to a more expensive apartment, buy a bigger car to accommodate his needs).
But he is adamant that he will recover and return to a full and active life; his focus is on others. He wants to be a motivational speaker and to set up a fund to help those who have suffered similar injuries, no matter the circumstances. He has been inspired by the generosity he has seen over the past year.
“It’s been mind-blowing. … All these good people who stepped out, who helped us, helped so many of us,” he says. “All the victims I know feel the same way. Complete strangers who give, when they don’t have.”

In the first three months after the explosions, the One Fund collected nearly $61 million in donations. In the next five months, another $12 million in contributions came in.
This big-heartedness was mirrored by a sort of proud defiance, exemplified by “Boston Strong.” The amount of merchandise bearing the slogan was astonishing.
“In the immediate aftermath of the bombings, it became a peaceful mantra that people could repeat and believe in. And if they said it enough, tweeted it enough, hash-tagged it enough, it would actually be true,” says Dan Soleau, a brand development manager for Marathon Sports.
The Marathon Sports store is on Boylston Street, where the bombs exploded; Soleau was 20 feet away when the first bomb went off, and suffered some hearing loss. He plans to run in the marathon this year. But for him, “Boston Strong” has lost any magic it once held.
“I’m too submerged in it. It’s all around me. … You would not believe the amount of sample items that came across my desk with ‘Boston Strong’ emblazoned on them — stickers, magnets, water bottles, wristbands, jewelry, socks, armbands. … Having piles of this stuff around me, it became less of this soothing rallying cry. It became a monkey on my back.”
Jennifer Lawrence, a social worker at Boston Medical Center, says the emphasis on “Boston Strong” had had other unhappy consequences.
“A lot of it is portraying that people are so resilient and so strong. While that is absolutely true, we are neglecting that people still have hard days,” she said. “These are very long lasting impacts, and that’s important for people to remember.”
In the aftermath of the bombings, more than 600 people took advantage of the medical center’s mental health services. There were those who were injured, or who witnessed the explosions; there were runners who suffer survivor’s guilt, because loved ones who came to root for them were caught in the carnage. And while most needed no help after the first few months, she has seen an increase in demand in recent weeks, as the anniversary approached.
Still, she says a “vast majority” of those who came through the hospital’s programs intend to attend this year’s marathon, either as bystanders or runners. For so many of the people caught up in last year’s horror, there is no question: They will be there.

Nicole Lynch will be there. Her brother, Sean Collier, was the MIT officer who was shot to death, allegedly by the two suspects in the bombings. She still mourns her brother — “Every now and then it kind of hits you again, like ‘wow, this is real.’ ” She will be at the race with Team Collier Strong — a group of 25 friends and family members, including two of her siblings, who will run to raise money for a scholarship fund to put one person a year through law enforcement training.
William Evans will be there, but he has little choice. He has run the marathon 18 times — including last year — but this time he will be there as police commissioner, supervising beefed-up security including more than 3,500 police officers (more than twice last year’s force), more security cameras, more bomb-sniffing dogs and restrictions on the kinds of bags runners and spectators can bring.
“It weighs heavy on my mind, that I want this to go off well,” he says. “I don’t want anyone hurt. I don’t ever want a repeat of the tragedy we saw that day.”
And Ed Deveau will be there. He is chief of police of the nearby city of Watertown, where one of the Tsarnaev brothers, Tamerlan, was killed, and the other, Dzhokhar, was arrested. Deveau, like many others, refuses to say their names: “You’ll get me to say, ‘older brother, younger brother.’ … I think they get way too much attention. They tried to put fear in this city and they failed miserably.”
Deveau will run with 11 other Watertown police officers. Nine of them have never run a marathon before.

Marc Fucarile is not sure what he will be doing on Marathon Monday. Two days later, though, he plans to marry his fiancee, Jen Regan, at Fenway Park. He hopes to dance at his wedding.
Roseann Sdoia also has not decided whether to attend the marathon. If she goes, she will have her family and friends at her side, including three first-responders who saved her life: Shores Salter, a Northeastern University student who used his belt as a tourniquet on her bleeding leg; Shana Cottone, a Boston cop; and firefighter Mike Materia, who held her hand all the way to the hospital.
Materia was to be more than her hero. He became her boyfriend.
“He has been there through thick and thin, since day one,” she says. “He has literally seen me at my worst.”
“I like when he tells the story better than when I tell it,” she says, laughing. “Again, he saw me on my worst day. So — if I have a bad hair day, I ask him, ‘Am I having a bad hair day?’ ”
His answer: “No, I’ve seen you have a worse one.”

Years ago, I had a stunning realization that has served me well in all my seasons since. Simply put, it... read more